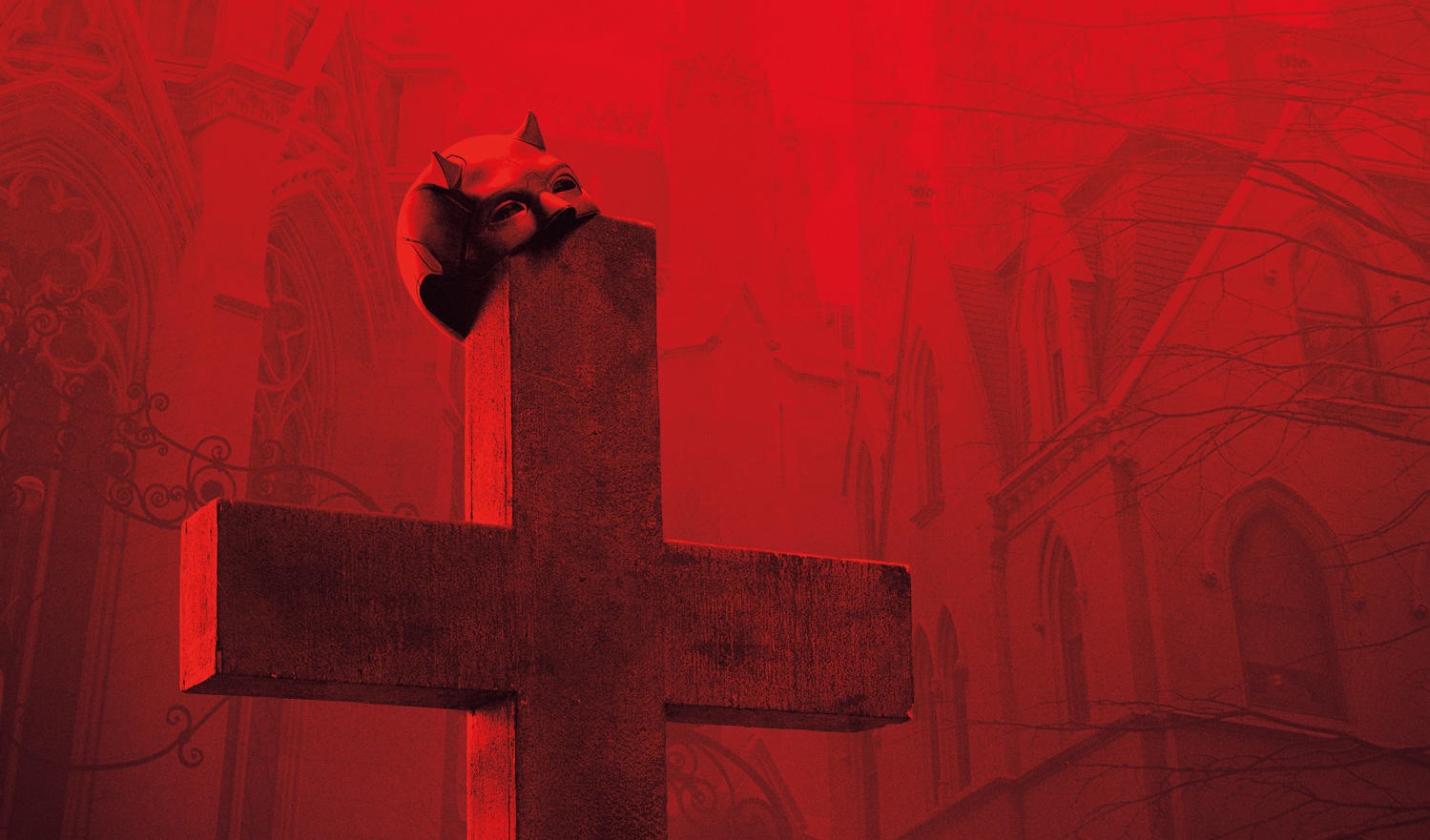 A job well done: The Christian themes in Netflix’s Daredevil

Although he is not king of a nation like Black Panther nor does he wield a magical hammer like Thor, Matthew Murdock, blind lawyer by day and vigilante Daredevil by night, can claim to be the most pious of his superhero contemporaries. Part of what made the first two seasons of the Marvel Netflix TV series so interesting was its decidedly faithful and nuanced portrayal of its titular character’s Catholic upbringing. For Matt (portrayed in the show by Charlie Cox), Christianity was not simply an addendum to his life but the lens through which he saw the world; his faith was not restricted to the times when he would visit Father Lantom (Peter McRobbie) for confession.

As such, Matt’s faith allowed a common superhero genre convention (i.e. impressive fight sequences) to represent something greater and gave his actions greater meaning. Stopping the trigger-happy Punisher from brutally murdering criminals meant that they had the opportunity to reform from their sinful ways. Fighting an ancient ninja cult meant putting an end to a systemic cycle of corruption and violence. In and out of costume, Matt viewed his acts as worship and honor to God. While season 3 more than delivers on the thrilling fight sequences and exploration of comic book mythology, it is ultimately concerned with bigger questions, asking how God can allow bad things to happen to good people (and vice versa) and how to keep faith and hope alive in a damaged world. Answers to such inquisitions are rarely easy, yet the show is boldly willing to explore such ideas with a critical eye usually not seen in mainstream television.

Before Matt can grow in his faith however, he must first be broken. In the first episode, he is a mere shell of who he once was, having been physically and mentally scarred when a building collapsed on him while he was defending Hell’s Kitchen from villainous assailants. Rather than be grateful for his Lazarus-esque rebirth, Matt believes God is punishing him for no good reason and feels betrayed. While wrestling with these inner demons, he later learns that his greatest nemesis Wilson Fisk (Vincent D’Onofrio) was released from jail, thus undoing the work and sacrifice it took to imprison him. On the surface, it seems that Matt was chastised while Fisk was rewarded.

Matt’s spite is reminiscent of many Biblical individuals such as King David and Jonah, though Matt chooses to identify himself with the story of Job, citing how just as Job had his children killed and his wealth and property destroyed for no reason, so too is Matt’s suffering meaningless. But whereas Job refused to curse God, uttering “Shall we receive good from God, and shall we not receive evil?” (Job 2:10), Matt is all too quick to resort to slander; after he saves civilians, they utter “Thank God for you” to which Matt curtly retorts: “He didn’t help you. I did.”

For Matt believes that the presence of trials and suffering means an absence of God, yet no sooner has he expressed this sentiment that the nun Maggie (Joanne Whalley) criticises his “charmingly simplistic view of God and the world”. Matt’s mourning, she claimed was a centripetal one and was focused on what he lost instead of what he could be gained. God’s ways, Maggie reasoned, are much higher and greater than what humans can see and while she has her own secrets and vices, she refuses to believe that her sin and mistakes are so great that God cannot overcome them. Additionally, Father Lantom states that “God’s plan is like a beautiful tapestry. The tragedy of being human is that we only get to see it from the back…we only get a hint of the true beauty that would be revealed if we could see the whole pattern on the other side as God does.” While Matt cannot change the past, he, like Job, has the opportunity to not lose hope in the present, trusting that God is somehow using his trials for a greater good.

… the Christian characters in Daredevil feel truly human: flawed, imperfect, yet with a desire to be better.

These revelations inaugurate Matt’s journey of redemption, reconstruction, and restoration throughout the season. Having used anger as a combative motivator, Matt learns that he cannot remain in that state or he will become like the monsters he seeks to destroy. Likewise, while he resolves to kill Wilson Fisk once and for all, believing it to be courageous and necessary, he becomes “brave enough to forgive”, seeing that murder is cowardly and that it is far better to hold on to the hope that people can one day change. Finally, while Matt believed that his friends and loved ones could never truly accept him for who he is and would only make him an easier target for his enemies, he comes to trust them and realize that strong community is ultimately what sustains him.

In Episode two, Father Lantom says to Matt, “if you want to hear God, you have to listen carefully.” It seems that the screenwriters likewise paid careful attention to Christian teachings as they crafted Matt’s character arc. Thankfully dodging the negative stereotypes that permeate mainstream media, the Christian characters in Daredevil feel truly human: flawed, imperfect, yet with a desire to be better. Though he does not say it out loud, by the season’s end Matt is more like the character of Joseph, who despite being sold into slavery by his brothers, was able to say in Genesis 5:20: “As for you, you meant evil against me, but God meant it for good.”

Matt believes that though he walks through the valley of the shadow of death, God did not leave him. He comes to believe that Job was not a fool, but an example of how individuals can rejoice in the midst of trials, not because of the trials themselves, but because God is working through that tragedy. The show sensitively depicts Matt’s anguished questions of how God can be good in the midst of a hard and broken world, and leaves him with his faith stronger than ever, having learnt that the most damning of falls can be the most fortunate. If only all television could depict such a nuanced and careful view of religion.