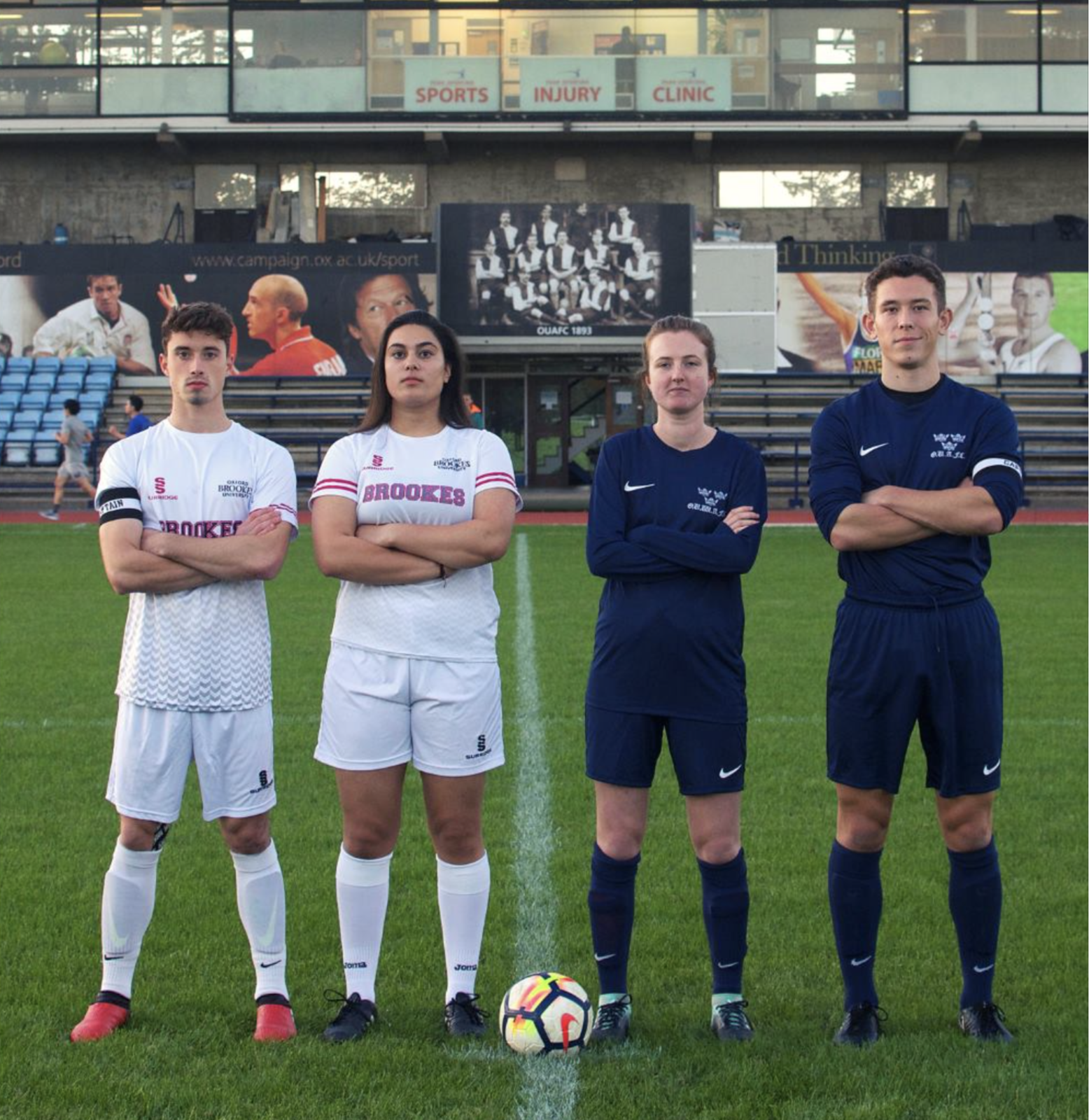 Oxford University Association Football Club is celebrating a double triumph over Oxford Brookes, with the women winning 2-1 and the men winning 4-0 in a thrilling Varsity Match.

Oxford University vs. Oxford Brookes is a local derby that inspires fierce animosity and the atmosphere was fervid throughout. It is a fixture that has delivered tense matches time after time, with the most epic of recent times being Brookes women’s fightback from 5-1 down with twenty minutes to go to win 6-5 against Oxford in the Conference Cup final last season.

The women’s match was by far the most evenly matched this year, on paper and in the match itself. Oxford’s women came into the match newly promoted into the top division and struggling to find their form and battling injuries to key players. Meanwhile, Brookes’ women finished last year as BUCS league winners and in October hadn’t lost a single game since February 2017. With their phenomenal comeback against Oxford when they last met in the Conference Cup final, Brookes were high on hope coming into this match.

Oxford definitely looked like nerves had got the better of them at the start and squandered possession from defence a few times at the outset. However, they were clinical in the counter-attack and on the 5th minute, Oxford’s striker Ella Vickers Strutt jinked a well-placed through ball past the keeper to open the scoring with Oxford’s first shot.

The goal was against the run of play and Brookes responded immediately. A long period of pressure resulted in a free kick from the right wing. Brookes’ number 15 delivered a ball that caused utter havoc in the box and resulted in Oxford’s keeper Anna Garcia making multiple saves. The slippy conditions were far from helpful for Oxford’s defenders but they eventually got it cleared.

The remainder of the second half saw some brilliant defending from the Blues as they settled into the game. Their lead never really looked under threat except from when the Brookes number 10 ran in behind the Oxford defence, yet Garcia was once again able to make the save. Yet Oxford never really looked like extending their lead until Taiye Lawal blasted a shot over the Brookes goal from close range. The teams went into the half-time break at 1-0, Brookes having had by far the most possession and attempts but Oxford being the most clinical.

The second half saw a much more assured performance from Oxford, who had more of the ball and got into the danger areas far more often. Nevertheless, just after the break Brookes’s number 7 prompted an excellent low save from Garcia. Brookes’ football had lots of speed and flair but were ultimately lacking the end product, cracking lots of long shots which did very little to trouble the Oxford keeper. Oxford’s patient play paid off 25 minutes with a sublime team goal. Taiye Lawal provided the assist, a big switch out to the right wing that fell perfectly at the feet of Rani Wermes who made a blistering run past the Brookes right back, cut inside and rifled the ball across the keeper and into the net.

With ten minutes to go, Brookes’ passion and flair finally paid off. An unfortunate defensive slip up allowed Brookes’ number 15 to run onto a through ball, however she was crowded out by defenders on the right wing and cutting inside did not appear on. She was faced with two choices; shoot, or hold up the ball and wait for her team-mates to arrive. Her decision was to score one of the most outstanding goals this reporter has seen in Oxford: a fast, curling shot at a difficult angle, guided perfectly into the top left corner.

The final ten minutes were livened up by the narrowed score, however the Oxford defence withstood last-ditch attempts at salvaging a draw. Brookes will feel hard done by with the 2-1 result since they played with great flair and intensity, however they were not as clinical as Oxford who were incredibly dangerous and clinical when they had the ball in the opposition half. Hopefully this win will buoy the Oxford women’s Blues in the league and set them up for bigger challenges to come.

The Brookes men were by far the underdogs in the second match of the evening. The Oxford men are in a comfortable 3rd position in the league above Brookes and won the Varsity double against Brookes and Cambridge last year. The start of the match saw a lot of half-chances for both teams, including an ambitious bikey from Brookes’ number 10 15 minutes into the match. However Oxford always looked likely to go on the scoresheet first and won a penalty on 20 minutes after Oliver Cantrill’s searching run down the right wing was met by a mis-timed tackle. Dom Thelen stepped up to take the penalty and hammered it to the keeper’s left.

Once they had broken the deadlock, Oxford’s men began to dominate Brookes all over the field. The closest Brookes came to scoring in the first half was a header hit safely over the bar from number 10, while for Oxford the chances kept on coming. On 44 minutes, they managed to convert one as Zac Liew guided a searching cross from Jamie Shaw past the Brookes keeper. At half time, it was 2-0 to the Blues.

Brookes started the second half with more confidence than they had ended the second half, forcing a good save from Harry Langham just after the kick-off. Oxford’s response saw Dom Thelen booked for diving in the box, although it did look like he had taken a hard knock from the Brookes defender. However not long after, Cantrill slotted Thelen’s cross past the keeper on the 67th minute to make it 3-0 to the Blues.

From here on in the Blues were totally dominant and Brookes found it difficult to get back into the game at all. A stunning burst of pace from Cantrill down the right wing saw him leave Brookes’ number 3 for dead and send a cross to the substitute Chris Coveney, who blasted a shot past the keeper at close range. The celebrations were ecstatic; Oxford had put the game beyond all doubt and totally outclassed their opponents.

The rest of the match seemed like a training ground display- Oxford were untouchable. At full time, the score was 4-0, a result which the Blues deserved for outperforming their opponents across the pitch. Oxford’s wingers were especially outstanding, their pace and precision crossing making it a good day to be a Blues’ striker.

The sporting domination of Oxford over our Headington neighbours is well and truly alive after a brilliant double-header. The women’s Blues deserved their win and could be on for an epic comeback if they can replicate their excellent defensive performance against Brookes in the league. Meanwhile the Blues men are going from strength to strength: this season looks like it has a lot more silverware in store.