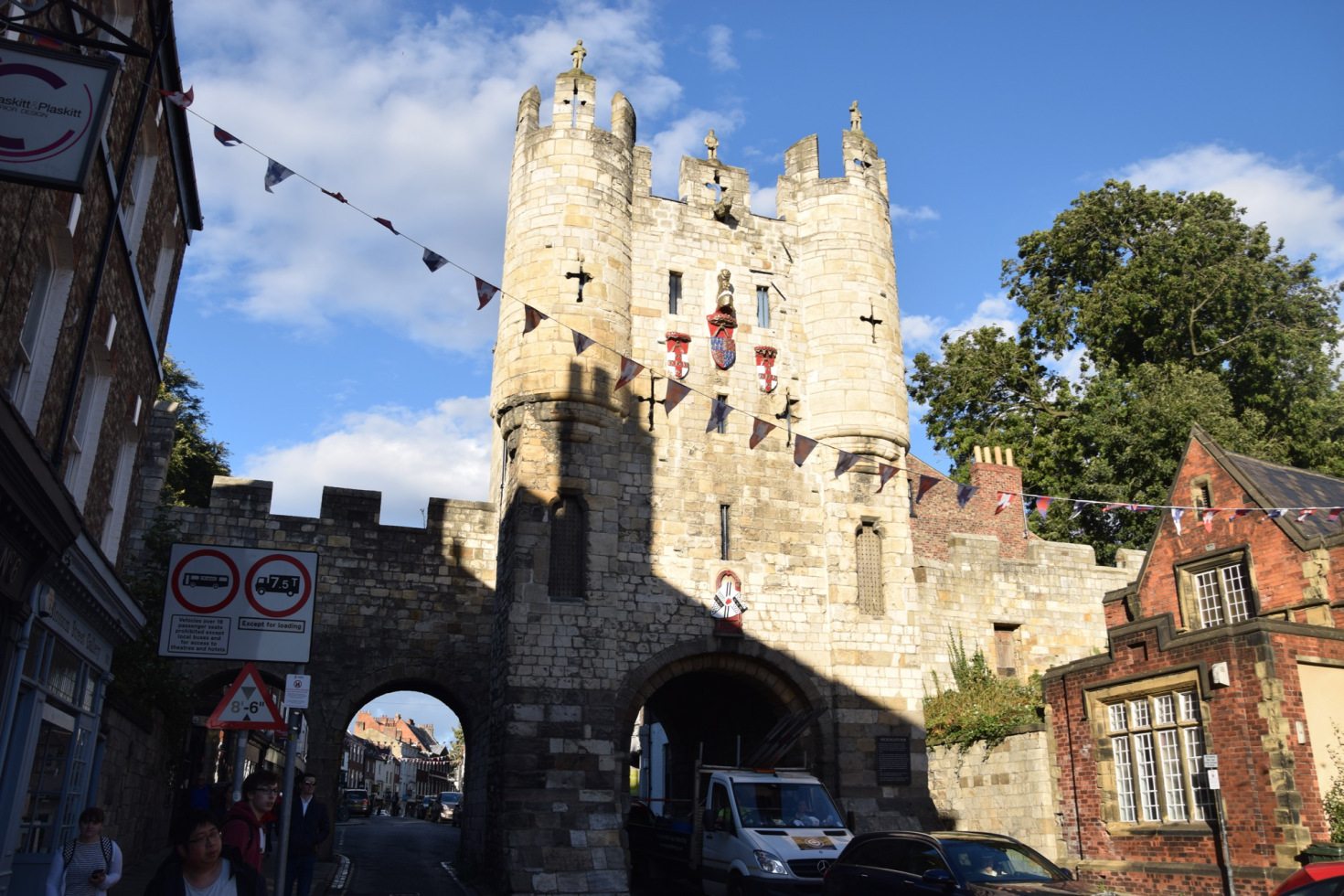 Fare: £68.70 (Off-Peak, with 16–25 Railcard.  It’s almost certainly possible to get this cheaper by splitting your ticket—I think the cheapest way is to split at Leamington Spa, Derby and Sheffield, but I haven’t checked this.

In fact, one of the biggest attractions in York is free, and that’s the National Railway Museum.  York was historically a major railway centre, and its station is still breathtaking.  This means it was a sensible place to put a railway museum, with one of its main halls being in an old goods shed, and one built as a new building over an old turntable.  The turntable still operates, and we watched it.  And walked through the object store, which is a huge mess of signs, models and other assorted railwayana (yes, that’s a word).  We also went on the HST carriage and the Bullet train, walked under whichever engine they’ve got that you can walk under, and in general probably spent a bit too much time there.

Okay, what else is there in York?  Well, the trouble is that most of the other museums, like the Castle Museum, the Yorkshire Museum and York’s Chocolate Story, and most of the historic sites, like York Minster and Clifford’s Tower, are not free.  You can at least see the latter two from the outside, and you can peer into York Minister from the inside by going in through the door to the ticket booths and immediately leaving again.  Which is probably a bit un-Christian, but so is charging for entry to your place of worship, so…

There is one free museum that I know of, other than the National Railway Museum, which is the Art Gallery, but that’s a fairly standard provincial art gallery, and maybe not worth coming all the way to York from Oxford for.  The gardens of the Yorkshire Museum are also free to enter, and you can see the ruins of the Abbey of St Mary there, as well as some of the ruins of the walls.  Did I mention the walls?

I didn’t mention the walls.  York has one of the most complete sets of defensive walls in the country (though not a full loop, like in Chester).  You can walk on top of them, though they’re perhaps not for you if you have a fear of heights,¹ as one side often has no walls or railings separating you from a drop onto a steep grassy bank.  We walked from Lendal Bridge to Micklegate Bar, one of the old gates in the walls, parts of which date from the 12th Century (the remaining parts from the 14th).

(A lot of York’s streets are called “Somethinggate”, like “Whip-Ma-Whop-Ma-Gate”, one of the shortest streets in the city.  Don’t listen if anyone claims it’s an old site for corporal punishment; Wikipedia tells me it means something like “the street that is neither one thing nor the other”.  “Micklegate” means “Great Street”.  The word “-gate” comes from the old Norse “gata”, meaning street, which explains why this is a fairly common practice in what was the Danelaw.  Incidentally, this is often (though not in York) shortened to “gut”,² and as there are a few examples of streets called “Westgate” pronounced this way, it took me a long time when I moved to Oxford to train myself to say the name of the shopping centre properly.³)

Well, that was a digression and a half, wasn’t it?  That means I’m running out of time to tell you about the shops.  Micklegate, in fact, has one of my favourites, Ken Spelman’s bookshop, which has a great stock of second-hand and discounted new, and has just the right amount of old-fashioned touches; handwritten signs, books wrapped in paper after purchase, etc.  Also on Micklegate is FortyFive, a record shop and café that is great, independently of the fact that I was recommended it by one of my friends who knows the owners.

I’d love to recommend the Spurriergate Centre, a café based in a beautiful old church, but I can’t, because it closed in July, leaving behind only my memories of hearty food and lemon-and-limeade.  Oh well.  Best move on to my other random shop recommendations: the Minster Gate bookshop, which is rabbit-warren-like; opposite it, the ethical trading firm Shared Earth, and of course the two branches of Bettys.  (One of those is on Stonegate, so named because it was paved when many streets weren’t; it was the via praetoria of the Roman settlement.)  Oh, yeah, and then there’s the Shambles, which we didn’t visit so you’ll just have to read about it.

So, yes, there is plenty to do in York even if you don’t have a single denarius to spend.  So why is this article like the Leeds one?  Well, because York is (points at map) here, whereas Oxford is (points further down) way over here.  There are at least direct trains, unlike with Leeds, but it’s a long way to come just for a day.  However, also unlike Leeds, there’s a lot to do, so if you want a bit of a longer escape from Oxford, it’s a good choice.

This article was originally published on Escaping Oxford