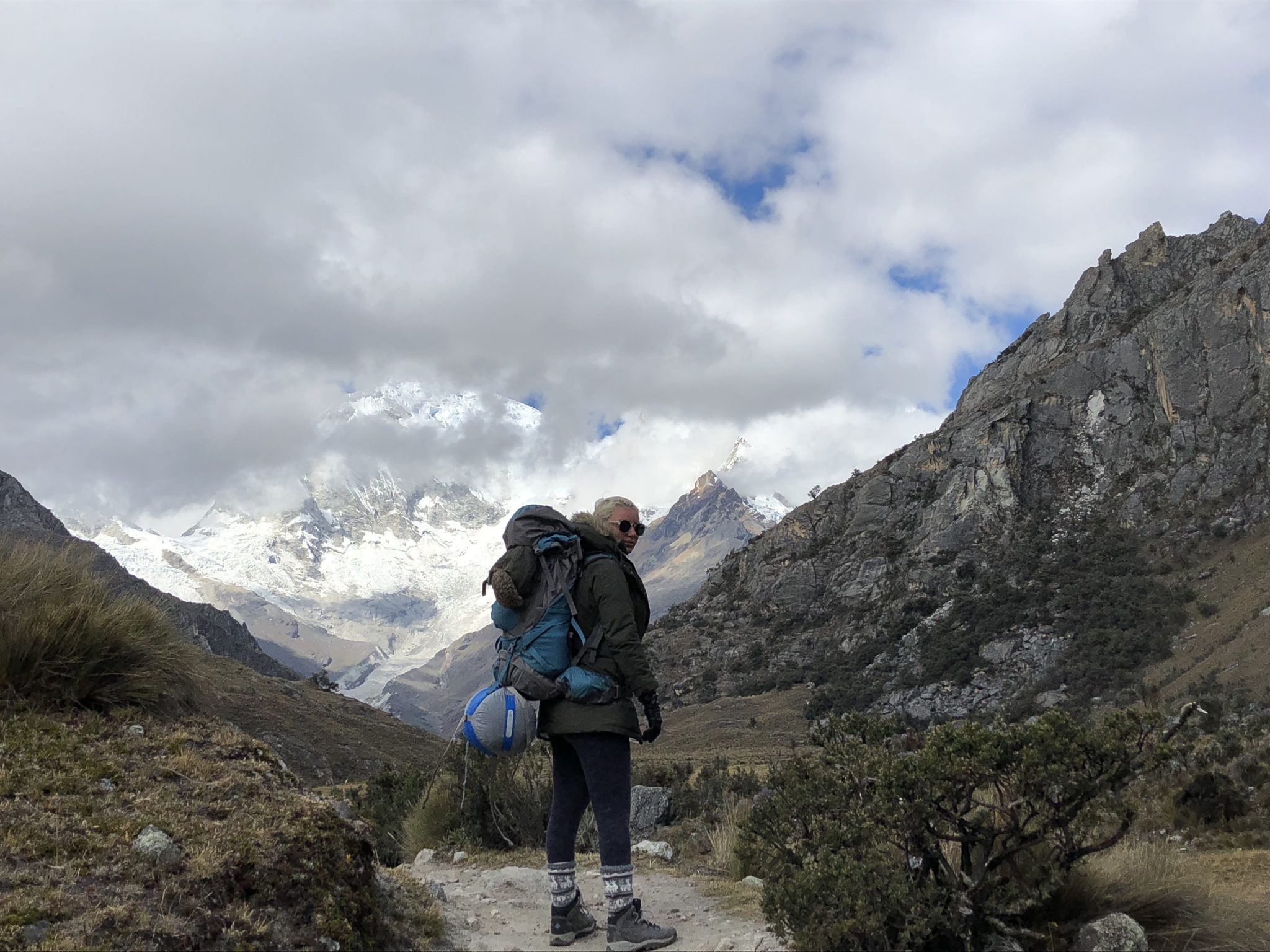 A summertime hike in the Andes

From an avid hiking enthusiast, I want everyone to know that the Andes Mountains in Peru are no small feat to climb. In fact, they’re riddled with four-hour climbs up steep, shaky terrain at an altitude so high that I almost passed out climbing up to my bunk bed in the refuge. There are two climbs I did in the Huascaran National Park, each harder than the last. For the adventurers that really like the challenge and reward of conquering a wonder of nature, I’d recommend it 100%, but those looking for a leisurely stroll, stay away.

It begins in the city of Huaraz, which is a traveler’s nest away from the tourist attraction of Cusco (which is the starting place for Machu Picchu). I’d recommend the 13 Buhos for a really chilled night in a board game bar with some Milky Chance music videos playing on the TV screens and live performances, and the Cafe Andino (a bit of a tourist trap, but a successful trap because the Pisco Sours are amaze-ing.) These places are much better to eat at than the street vendors just because the meat and vegetables can really make a foreigner sick, especially someone from Europe or the US where food undergoes a more rigorous sanitation process.

Wild dogs are very common and will walk along the sidewalk just like people, but the dogs are totally harmless as long as they are not touched. There are fewer dogs in the center square, where there’s a market of hand-woven hats and jumpers that will come in handy for the hike. The Peruvian people are all very lovely and welcoming, but I was stared at quite a bit because of my dyed white hair (I assume because I didn’t see anyone else with dyed hair).

We passed the Laguna Chinancocha on the way, which is a lake with the most vibrantly blue and clear water I have ever seen…

Drink lots of mate de coca (my highest recommendation) because even with my dad’s pills to adjust to the altitude, I was still frequently light headed and tired. The mate de coca is just coca leaf tea, which grows natively in Peru and is very common in South America. I found it in every coffee shop and restaurant, even in a hillside shack cafe en route to the Huascaran National Park.

A small bus came to our hotel at five in the morning. We were packed with our hiking bags loaded with dried food packs, sleeping bags, tents, and enough clothes to last the three days we would be in the park. The bus ride lasted three hours or so along dirt roads scaling the mountainside. We passed villages of shacks with tin slates for roofs and TV antennas sticking out the side of the brick walls. These houses were perched on just enough of the road to not fall off the mountainside. We passed the Laguna Chinancocha on the way, which is a lake with the most vibrantly blue and clear water I have ever seen (think of the sparkling color of Jude Law’s eyes.) It’s amazing to know what water could look like when untouched by people.

The first hike to the Lag 69 (Lake 69) would have been a rather casual and not so challenging hike if not for the twenty pound hiking bag on my back and the ridiculously increased altitude. The higher I climbed, the less oxygen was available in the atmosphere, so my heart was constantly racing. Huge tip: sunblock is essential. The higher altitude also means stronger UV rays, and so not only is the heat more intense, but the sun damage occurs more rapidly. By the time we ascended to a camping spot, about two and a half hours up, my face was throbbingly red from the sunburn. We were hours away from any ointment that could help so I used as much lotion as my mum had packed.

Our camping spot was a grass plain shielded by boulders that kept the wind away. It was also in the middle of a cow dung patch, but my mum the optimist pointed out that cow dung was great for keeping a campfire going. My brother and I foraged for enough kindling to keep the fire going for a few hours, but we only used it for warmth. We packed a propane tank and some cookware to warm up enough water from a stream nearby to use on our dried packed camping food. We put the stream water through a water purifier, just in case (not a Brita filter.)

I only recently quit smoking cigarettes before that trip while my dad had himself a cigar or two back in Huaraz, so I was pretty convinced this would be the end…

The number of stars I saw that night made it an unreal, rather spiritual experience. On a mountain top without any light source or people for miles in any direction the sky was simply full of stars. We actually met a photographer who was on the hike for the purpose of photographing the Milky Way that was only visible during that time in July. Apart from the crackle of the campfire, all was silent. My brother found it eerie, but with so much constant light pollution back at home, it was a rare treat. Between myself, my brother, mom, dad, and increased altitude, a bottle of wine kept us pretty cozy on that calm night.

The hike down was infinitesimally easier, but the secondary hike to the park refuge was a hellish climb. We were told before we ascended that it was an hour of steep hike and then two hours of straight hiking. So for the first hour, we held onto the hope that the climb would level out. About an hour and half in, my dad could hardly keep his hiking bag on, so I took the tent from his bag and added an extra five pounds to my load.

Refuges in these mountains can sometimes get filled, and after the previous night in tents and eating food out of a bag, we were all ready for a bed and hot meal. So my brother and I went ahead of our parents, driven by the fear of spending another night outdoors in our tents. We had to stop every five to ten minutes to catch our breath. My heart beat so fast I swore that I would die on that cliffside from a heart attack. I only recently quit smoking cigarettes before that trip while my dad had himself a cigar or two back in Huaraz, so I was pretty convinced this would be the end. Yet we persisted. Perhaps every ten to fifteen minutes, the air would become too thin and so my brother and I would drop our packs entirely and try to slow down our heart rate to a mildly quick pace instead of a dangerously rapid pace. There was not enough oxygen to bring my heart to a resting beat; I could always feel it thrumming in my ears as it strugged to pump my blood fast enough.

So that one hour steep hike with two hour plateau was actually a four hour steep hike with no plateau whatsoever. The only thing that kept us crawling forward was the need to find a refuge as some reward. We were not alone on the hike and the people that passed us only fueled our drive to beat them, like we were in our own intense episode of the Amazing Race. After four long hours of aching legs and fatigue, we finally spotted the top of the snow-capped cliff and the chimney smoke of the refuge beyond it. Salvation at last, I thought, and it did have enough room for the four of us. My brother and I set down our packs in our room which was a communal room where every traveler slept in in bunk beds. We decided it would be kind to help our parents with their bags and so we went back outside. Luckily, our parents were in eyesight of the refuge. We wanted to help them, but the exhaustion of the climb suddenly caught up with me.

My mom was awfully sick by the time she made it inside, so much so that she skipped dinner. We left her with some bread, water, and a puke pail. My brother got sick later, once we left the mountain, from food poisoning and sun exposure. That night in the refuge, I forced the chicken soup into my mouth while I lay practically catatonic on the wooden mess hall table.

But that night I was able to sleep in just one layer of clothing and a blanket instead of four layers inside my sleeping bag with my shoes on.

The steepness did not become such an inconvenience on the way back down the mountain, and we saw a caravan of llamas for the first time! Their ears were decorated with red ribbons and they carried bags of food and supplies on their embroidered saddles up to the refuge we just left. The llamas were all different shades of fluffy wool from totally white to brown spotted to a deep black. It felt like they knew they were being photographed by us and so they threw their head backs and wiggled the little bells on their ears as they passed…

I returned exhausted, but I cannot recommend the trip enough – embrace the uncertainty!