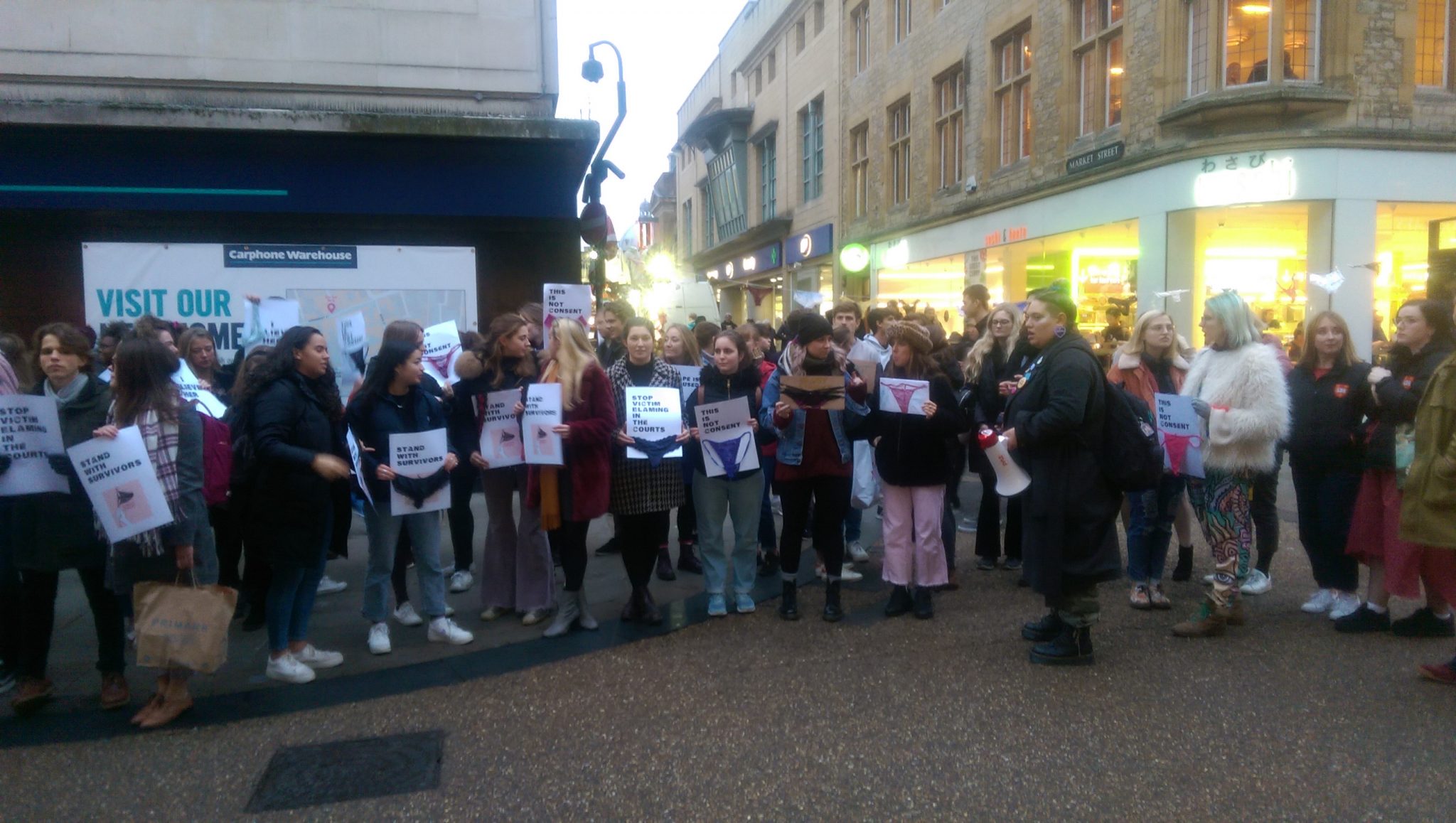 Around 60 Oxford students today took part in a sexual consent protest on Cornmarket Street, highlighting the recent case of Irish lawyer Elizabeth O’Connell using a girl’s underwear as part of her closing statement, after which the accused was found not guilty.

The protesters hung a line of lacey underwear, like that mentioned by O’Connell, across the junction with Market Street. Gathering in front of it, they held signs with these underwear attached, stating “this is not consent”. Braving the cold weather, some members of the group removed their overcoats to reveal their underwear beneath. They chanted slogans including: “What causes rape? Rapists”, “Clothing is not consent”, and “I believe her!”

The organiser of the protest, Bryony Streets, told protesters that events like these taking place on the anniversary of women’s suffrage in the UK “highlights just how far we are from liberty”. She called the court case an “unsettling judicial precedent” which was not “just an Irish phenomenon”, noting the low proportion of female judges, which was estimated by the Council of Europe as 30% in England and Wales compared to a 51% Europe-wide average.

She said that “society had infected our minds”, leading to a normalisation of rape culture. “We are not suggesting change, we are demanding it.”

Katt Walton, the Oxford SU VP for Women, said that those who have been sexually assaulted “are not victims, they are survivors”. She called on men to challenge the behaviour of others, saying that women should not have to drive change alone.

Bethan Hughes, who read a poem at the protest, told The Oxford Student that “What a woman wears is not indicative of her consent, but time and time again we hear ‘she was asking for it’, ‘did you see what she was wearing’. And we deserve better. Because clothing has nothing to do with consent, and often has little to do with the motivation behind sexual assault. When I was sexually assaulted, I wasn’t wearing particularly attractive underwear. Does that mean my sexual assault was more legitimate than someone else’s? A court would have likely decided that because I was wearing a mini dress, that in itself was indicative of my intent to have sex that night. What we learn is that it doesn’t matter what we wear, because someone will find a way to blame us. That’s why I attended this protest, because my underwear and clothing do not indicate my consent, nor does it indicate any individual’s consent. Even if I was wearing jeans, I probably would have been assaulted, because ultimately it wasn’t about what I was wearing, it was about my assaulter’s urge to control me and to take what he wanted. Stop blaming the victims of sexual assault, and start blaming the perpetrators for their refusal to respect the basic human rights of their victims.”