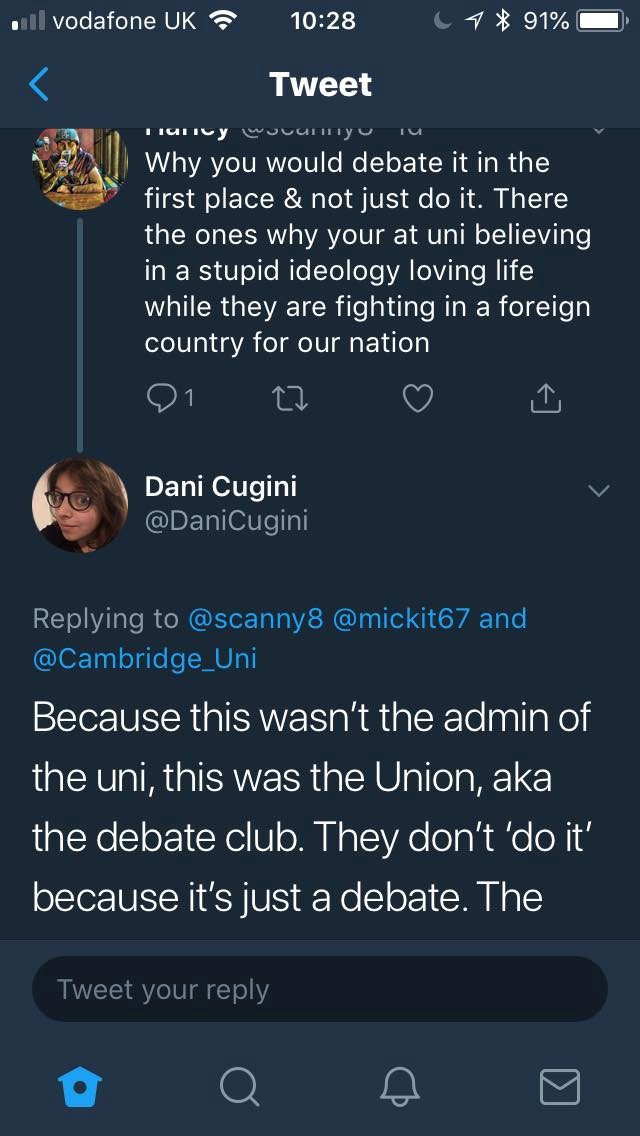 What happens when you try to correct misinformation on the internet?

Last week, a news story caused shockwaves on Twitter, titled ‘Cambridge students reject Remembrance Day’. That’s just one article, but if you Google it, you’ll see about seven with near-identical wording, all from moderate to far-right-wing papers. Here’s the thing, though. This phrasing is extremely misleading.

So what actually happened? A group of students at the Union had a debate. Someone from the Cambridge University Conservative Association raised a motion to increase the number of events at, and promotion of, Remembrance Day. The university already has events which take place on Remembrance Day and many people at the university will hold unofficial silences. The motion was then redrafted, with its aim changed to commemorating all soldiers who have died in war, before being rejected for being “too vague”. Then everyone went home, and a couple of days later, a discussion at the university’s debate club had been magically transfigured into the entire student body “rejecting Remembrance Day”.

Now, I don’t like seeing people get death threats, so I decided to take to the Twitterverse and disseminate the correct information about this inflammatory debate.

So, how did that go?

Perhaps the most civil yet most frustrating responses I received was when I debunked the whole story, and people replied with words to the effect of “Well, I guess we have a difference of opinion”. Er, no. I have the facts. That’s not the same thing.

Problem 2: People can’t tell the difference between the Union, the students, and the university.

Among the people I talked to, it was widely believed that the Union was identical with the university administration, which is false. There was also a lot of vague use of ‘they’ in their angry tweets, which seemed to be directed both at the specific people at the debate, at everyone at the university, and at millennials more generally.

This lack of distinction may seem merely frustrating, but it’s actually highly toxic. The communal tendency to turn the public actions of any small group of students into the opinions of all students means that any sense of the diversity and nuance of viewpoints at Oxbridge can be conveniently hidden. Instead, we’re a mob which wants to collectively strip society of all its virtues and replace Remembrance Day with Jump-Up-and-Down-on-Veteran-Graves Day. Or at least, that is what’s implied. Turning students into a homogeneous crowd hits the perfect sweet spot for conservative media: we’re somehow both threatening and idiotic, powerful and bumbling, so this story can trigger both rage and supercilious glee.

A general point which will run throughout these tweets: people don’t reflect on their statements when they’re pissed off, and they’re also terrible at listening to you.

Problem 4: Certain topics are off limits.

On the one hand, all I hear about students in the media is the travesty of censorship on student campuses (usually misrepresented and blown out of proportion), deplatforming, how we instantly start crying when someone disagrees with us. But now the students are doing the free speech, but they’re doing it too much. I’m astounded by the logic here; apparently, protesting a fascist who comes to speak at your campus is censorship, but scrutinising the institution of Remembrance in this country is despicable and all the people at the university who have been done so deserve expulsion, public naming, or to be punched in the face.

The rule of the internet: if you’re right but in the minority, you need to argue perfectly; if you’re wrong but in the majority, you can get away with pretty much any bullshit you want.

I would like to point out that the vast majority of the people who were responding to me, despite being around 20-40 years older, have the same amount of experience in combat that I do, i.e. none. Nevertheless, they strangely presented themselves like ‘we’ had directly insulted ‘them’. There was a lot of anger, exclamation marks, and insults. Nobody was talking about policy. Nobody was actually addressing the points that any of the students made and disagreeing with them (because, of course, most of them didn’t know what points the students had made, and didn’t care).

This felt strange to me. Whenever I see somebody being misogynistic, or homophobic, or some other viewpoint which feels like it’s attacking me as a person, I feel a dull thud in my stomach. I feel righteously angry. But I temper myself. I’ve learned that I have to. If I respond with any measure of anger, the original poster may respond to me with double their original aggression, and I’ve been taught that that’s my fault for ‘rising to the bait’. Just ignore it, they say. Be the bigger person. You’ve always, always got to be the bigger person. I was constantly checking my tone and feeling guilty as I responded to these people, who were uniformly far more belligerent than I was: could I be making them angry? Have I gone slightly off topic anywhere? Have I made a misstep? Of course, even if you don’t make a misstep, they’ll ad hominem you anyway. If they can’t win the argument, they’ll fall back on the old ‘offended student living in an ivory tower’ trope.

To be clear, this article isn’t to tell people to give up combating misinformation online. It’s an essential job and it does actually get through to a few people. Plus, you’ll convince some undecided people who are just browsing through to make up their mind. Unfortunately, mainstream media outlets have far more power than we do, and if people are already prejudiced against you (I’m a young, female Oxford student and most of the responders were conservative men, who are likely to pigeonhole me as some upstart trying to talk down to them), you’re only ever going to have limited success. This is to show you the kinds of pitfalls you can fall into, so you’re prepared for them if you do decide to engage.

It’s also a good idea to have some media awareness, because unfortunately, students are an easy scapegoat for conservatives, and whilst we shouldn’t have to change our behaviour to appease people who are prejudiced against us, it’s still a good idea to think “Hey, could my student activity or organisation be doing something which could be deliberately misconstrued by the media?” If we know what might be coming, we have the tools to prevent it and speak out against it before the wildfire spreads across Twitter.