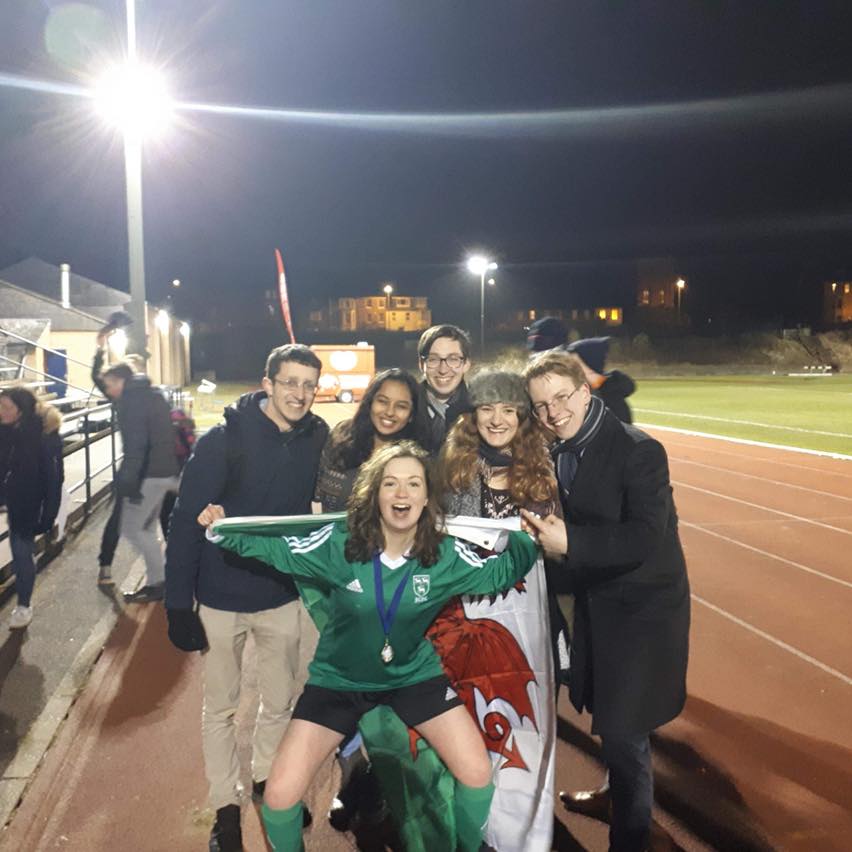 As Profile Section Editors, Francesca and I sought to curate stories that were reflective of an increasingly diverse and international Oxford, both in the makeup of its student body and in the individuals that interact with it. For our final print piece, we decided to look inward at the OxStu team that has brought you content week after week. As such, we bring you Charlotte Austin, Sports Editor; Alexander Levy, Puzzle Editor; Liam Frahm, Creative Director and Charlie Willis, Editor-in-Chief, on their experiences with the newspaper this term.

What’s been the highlight of your work with OxStu this term?

Charlotte: I really enjoyed writing a Cuppers round-up of the first-round draw and what matches had been played already. This is primarily because I’m involved in college football myself, so it was a nice hat-tip, but I also wrote this after The Cherwell did theirs and didn’t write about women’s fixtures. We all love college football – it’s such a big thing in Oxford. So to write about everything anyone would need to know was quite nice, I thought.

Alexander: This is going to be so insignificant compared to some of the meatier OxStu articles, but I did really enjoy insulting political leaders in crossword form. From memory, I managed to call Jeremy Corbyn a robot and refer to the David Cameron pig-scandal. Who knew writing crosswords could be so politically stimulating?

Liam: Every crossword – they’ve been the most fun to lay in. To be honest, every Puzzle edition has been great – Miranda comes up with something different each week, like with the emoji section I had to screenshot all the emojis required.

Charlie: The socials, definitely – we’ve had two crewdates, freshers’ drinks, a senior editorial dinner and will definitely have another drinks at the end of term. The team has been very tight-knit this term, and it’s been very nice to have a close team that gets on really well. It’s very much an environment of banding together to do sometimes quite hard, demanding work with smiles on our faces.

What’s your favourite piece that you’ve seen in OxStu this term?

Charlotte: I enjoyed the little articles – I can’t remember who wrote them – about little trips outside the UK, to places such as Coventry and Slough. It’s quite me – I took a detour to Thame earlier this term. It’s quite ‘#travelinspo’, ‘#wanderlust’ in a different way.

Alexander: Of course I’d have to credit the imagination of my fellow Puzzle Editor Miranda, whose flare for creative puzzles has put my repetitiveness to shame. If I had to pick a piece of prose, however, I’d go for James Cashman’s piece last week about his experience of mental health issues. It’s an incredibly honest and brave piece that proves insightful at all levels. I think that kind of article is really difficult to write, but is so important. It’s well worth a read!

Liam: On the one hand, the transphobia investigation was probably actively my favourite piece of journalism. It was actually good and had an effect on the real world – it wasn’t just students pretending. I don’t know if that’s my favourite, though – actually, [Profile’s] PresCom one was really good in terms of following up on an issue that everyone had almost definitely forgotten about.

Charlie: It would be all the Michael Biggs content [referring to a 26 October 2018 investigation that traced transphobic tweets to Michael Biggs, a Professor of Sociology and Fellow of St Cross College at the University of Oxford]. It was the first major national interest-level story I had done, plus it was so close to home as he was an Oxford professor. We had some personal correspondence with him in the process of writing it, and I know people who go to his lectures, so it felt very important and very real. Because there was backlash when it came out, it was also nice to know that our content made a difference: we’re a student paper and these stories do matter, contrary to popular belief. The biggest response was that we got picked up by The Telegraph, and the postgraduate community at the Department of Sociology also sent an open letter to the department about their discomfort and concern.

Does journalism feature in your plans after Oxford?

Charlotte: At the outset, it didn’t, but then I realised that over the course of my life I’ve ended up doing journalism when I didn’t expect to, as part of other things. I’m always writing for what people ask me to contribute to. So wherever I go, this will have been a good experience, given that I’ll most likely be writing articles about what I’m doing. I’ve written for a website called LabourList, which I like to call the Labour Party news source; I’ve also written for Oxford University Labour Club’s magazine Look Left – it’s a great publication.

Alexander: I’m not sure I really do any journalism for the OxStu, so no! If anyone will pay me to write crosswords, then I suppose I could always steal some from other newspapers.

Charlie: I have no idea. I don’t know what I want to do after Oxford. It will almost definitely involve writing – copious amounts, and hopefully editing as well. I’m in the process of writing a novel, and the skills I’ve picked up at OxStu have proved helpful: it’s partly knowing what people are interested in, which is a great thing about doing student journalism. […] I’m very much into the school of thought that says [to] write as few words as possible: also, my proofreading skills are very good now and that’s almost entirely down to the paper. Mostly, I think I will do related but not specifically journalistic things after this.

What else are you involved in?

Charlotte: Unsurprisingly, I’m involved with the Oxford University Labour Club and I’m currently its Co-Chair. It’s been incredibly stressful, but there is always the odd moment of real enjoyability – like tonight, after meeting my big pal Ian Lavery from Northumberland. I also play for the mighty Jesus College Women’s Football Club, also known as the 2018 Hassan’s Cup runners-up. That being said, I’m going to kind of retire next term, gracefully, from everything apart from football – I need my football to keep me sane. Next term, I’m going to become a degree machine, but I’m definitely glad I’ve done all the things I wanted to and more at Oxford.

Liam: In terms of formatting, the other thing I’ve done is to be the Creative Director for Alexandria, which came out earlier this month. It’s another really cool way of getting to format a publication, and that’s different to OxStu because I actually understand OxStu’s content whereas with Alexandria I normally have no idea what the classicists are on about, but at least I can make a sexy journal. The other thing I do is the radio show, called ‘Think Before You Speak’. It’s a show in which we don’t really think before we speak – that goes out weekly. It’s nice that it’s very tangible, in terms of the end product. You sit down, you do the research, get the people, record, edit, upload, and it’s done, in contrast to Oxford work which is more of an indeterminate process. With the radio show, I have an end product and I quite like it.

Charlie: On the publications side of things, I’m the Editor-in-Chief of Alexandria, the undergraduate Classics journal. On a related note, I’m also Secretary of the Classics Society. I’m also Secretary of the Women in Philosophy Society which will be gearing up this year, and we’re probably going to launch a publication, so I’m going to be heavily involved in student publishing again.

What are you looking forward to next term?

Charlotte: I’m looking forward to finally being able to work on my degree, uninterrupted. I’m writing my dissertation next term about the Durham miners – it’s going to be sick. I’m looking forward to having a regular bedtime – stuff like that. But I will occasionally contribute to the OxStu, I’m thinking, because I’ve had so many good experiences out of it, especially with all the live sport I’ve gotten to cover. I wouldn’t have thought of going to Brookes Varsity otherwise!

Alexander: Next term I finish my thesis, which will be a huge weight off my mind! From a slightly more positive perspective, there are two bops, the boat race, endless trips to Spoons. Really just opportunities to drink. Potentially while solving the puzzles written by whoever replaces me.

Charlie: I’m looking forward to Classics Society because we’re looking to get some graduate speakers and hopefully tutors to give lectures, which will be sick. My tutor gave a lecture on sex dreams in the ancient world, and he gave the lecture in a college chapel. There was literally a crucifix on the wall next to him – it was the most cognitively dissonant setting for it! Other things I’m doing next term: I’m Social Secretary for the OxStu, because it’s traditional to take up the post after the role. Hopefully we’ll be continuing the close-knit and social group of editors, because we have quite a significant proportion of the team holding over. Apart from that, on the Union front: I’ll be stepping up a bit more in the DRO team. This time, I was the most junior member.