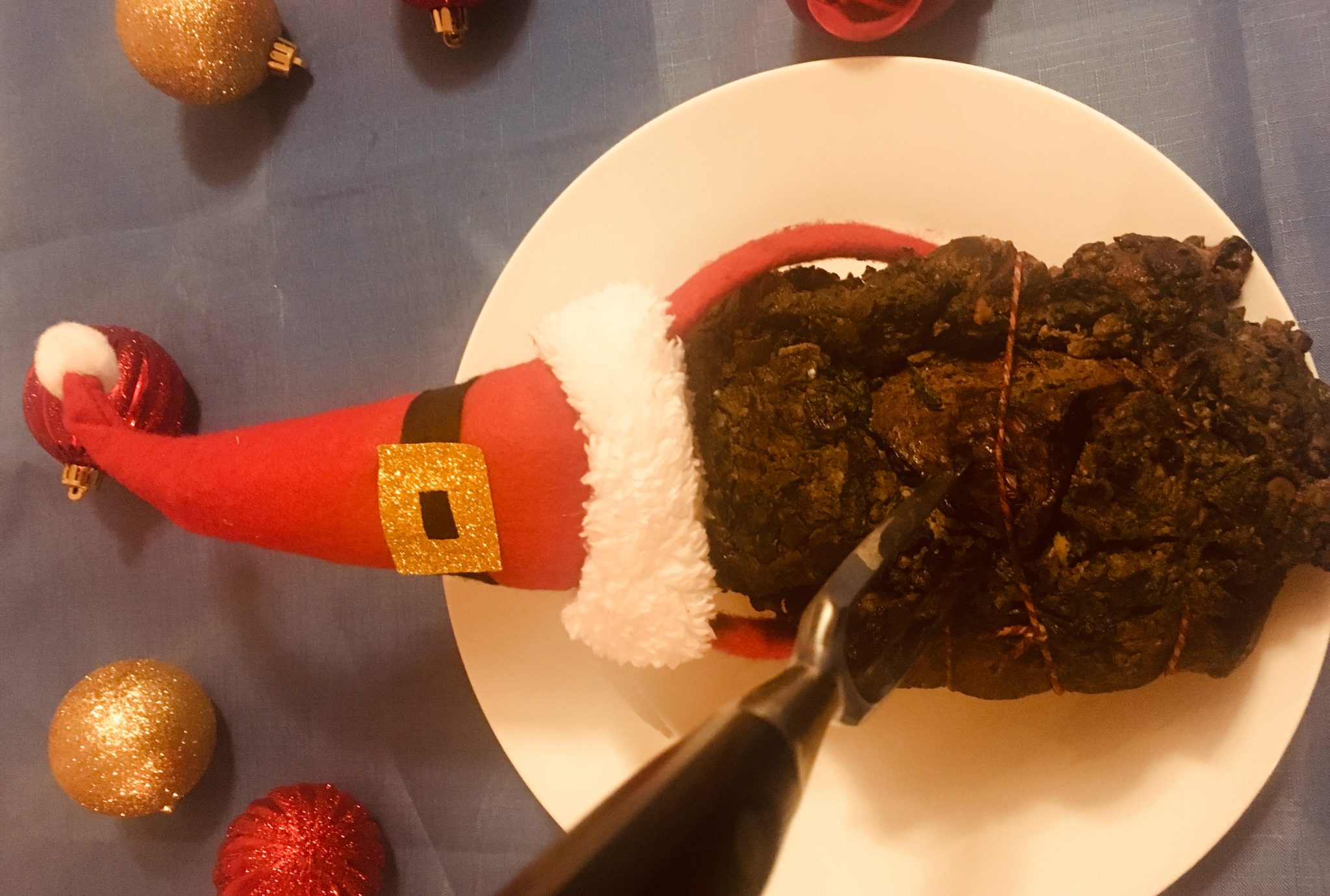 Image credit: Louis Thomas. Description: a roasted ox heart with a Christmas hat on it.

The ox was dead, to begin with. I know this because I bought its heart on the Internet. The festive season is closing in and if, like me, you are a disgusting glutton, then this provides the perfect opportunity to gorge upon all of the gastronomic atrocities which the commercialised Yuletide avalanche unleashes upon us. Christmas is absurdly expensive, and very wasteful for a tight-fisted, covetous old sinner like myself, though my current bank balance suggests that I’m not tight-fisted enough. Perhaps you are having family over this Noel, so, if you don’t like them, why not serve them offal on the big day? Well, I believe that the redemption of the cheaper cuts is long overdue, and, having spent much of this term rummaging for Father Offalmas’ proverbial “organ sack”, I shall record here what I believe to be the most delicious ox heart recipe that you will never try. Humbug.

Cooking offal for Christmas is not exactly innovative, nor is anything I do – the original mince pies contained all sorts of chunks of meat, with one 1845 recipe putting a juicy tongue into the pie, which is surely just the festive twist you need to ruin any social gathering. It’s a shame that these Victorian recipes have been abandoned, and by shame I of course mean “massive relief” – these are the shadows of things that have been, and thank Christ they’re no more. I had intended to create a dish which I would call “bollocks in blankets”: ox testicles which are poached in stock (after being given a small prick, so they don’t explode), and then, once the membrane is removed, wrapped in bacon and roasted. Unfortunately, I could only buy them off pet food websites, which I took as an omen.

Perhaps you are having family over this Noel, so, if you don’t like them, why not serve them offal on the big day?

It was after receiving visitations from three Tesco own brand spirits that I came to the conclusion that of all the bits of animal you could cook for Christmas, heart is the most appropriate – partly for symbolic reasons of love and affection, but also because you can give a heart a damn good stuffing; that’s the beauty of cooking a chambered cardiovascular organ. I procured one and a half kilos of heart from the Internet for around fiver, an absolute bargain, though I did have to pay £12 for delivery, but for the sake of being able to title this article with a Wham! pun, I’d say it was almost worth it. Almost.

The first step I undertook was to give the heart a bit of a trim for the big occasion. Most of the tough gristle had already been removed, but there was still a layer of hard, chalky fat which I sliced off. I then went about making a few incisions inside the heart so that I could fill it with even more stuffing before I rolled it and tied it up. I then had to make my stuffing with which I would stuff the stuffing cavity I intended to create within the heart. Firstly, I made a duxelles of mushrooms, shallots and garlic (in a food processor, because I had lost the motivation to finely chop the ingredients), which I then cooked off in a dry pan to extract as much of the moisture as I could, leaving me with an intense paste, which is the best kind of paste. Once that was done and set aside, I wilted some spinach and roughly chopped it before adding the vital ingredient: chicken livers. It might be a crime against decency (and several government regulations, probably) to unite the organs of two different species, but chicken livers fried in butter and coarsely chopped add an exquisitely delicate flavour to the stuffing and they work very well with the heart. These are delightful flavours (apart from the spinach, which is just there for colour and roughage), but it’s not particularly “Christmassy”, and by that I mean that it is not sufficiently spiced, a flavour which has somehow become associated with December. I added a respectable amount of salt and pepper, and then some grated nutmeg (I don’t do measurements – just add the amount which you like, or, even better, don’t bother at all), and, for a final festive flourish, some grated fresh ginger, which adds a wonderful warm hum to the stuffing.

If I could work my will, every idiot with “Merry Christmas” on his lips in November should be sautéed with his own stuffing and buried with said stuffing pumped into his heart – but as I am such an idiot, I shall ignore the quirks of the Oxford Term timings and crack on with the recipe, even though Christmas is a twelfth of a year away. Now it is time to stuff the slabs of heart: open them up, with the inside facing upwards, and then pack them with your/my stuffing mixture, then shape it into a sort of gory Swiss roll. Now is a good time to dig out that student staple, butcher’s twine, and tie several butcher’s knots to keep the heart tightly rolled, so that the stuffing stays in and the meat cooks more evenly.

Coupled with the symphony of flavours from the stuffing and the rich sauce, it was indeed a pleasure, and worthy of a big fat “Gaudete” with knobs on.

You will then have reached the time for the cooking. Firstly, in order to achieve a nice crust on the heart, you should season the outside and then place into a hot pan for only a few minutes in order to get those Maillard reactions going. Then comes the time to place the meat onto a trivet of onions and carrots, this will protect the meat from direct contact with the roasting tin, and provide the foundations for an exquisite gravy, and place at the bottom of an oven preheated to 150°C for forty minutes so that it will be nice and pink. If you want it more well done, you don’t deserve anything good in life.

Undoubtedly, as you observe this once noble organ roasting away, your thoughts will turn towards the cold embrace of death, and what your future may, or will hold – as mine usually do during these offal recipes. Remove from the oven once the time is up, and allow it to rest; it’s a dense, hard-working muscle, and will therefore need time to relax after its trial by oven. Place the roasting tin onto the hob, remember to turn it on, and add a tablespoon of flour (which will thicken the gravy), some of the trotter stock from the first offal recipe (it was a simpler time) and a hearty glug of balsamic vinegar. Allow to reduce into a rich sauce. In the fifteen minutes or so this will take, the meat will have rested, and can be carved into thick slices.

The beautiful blushing flesh and the aromatic stuffing were sublime. The meat was slightly tougher than normal roast beef, which is to be expected with heart, but it was nevertheless delicious, combining an intense flavour of roasted meat with the slight mineral tang that you get with liver to create a wonderful experience. Coupled with the symphony of flavours from the stuffing and the rich sauce, it was indeed a pleasure, and worthy of a big fat “Gaudete” with knobs on. I would serve it with potatoes roasted in an offensive quantity of goose fat, shredded Brussels sprouts fried in bacon fat, and carrots confited in butter. It seems that the best way to redeem offal and make it a little less, well, morbid, is to treat it like a roast dinner (though this only works for certain cuts): there’s more of gravy than of grave about this dish. With my thankful heart, I feel like I have created the Christ of offal dishes – a recipe which can wipe away the sins of meat jelly and tripe and liberate the cheaper cuts from the chains of their reputation. The surplus of offal which populates supermarket shelves and butcheries is testament to the necessity of a meaty Messiah to save these wretched cuts from the bin of eternal damnation.

I have honoured Christmas with my heart, creating a recipe which, though not perfect, is superior to the parching flesh of the turkey, and it would smite your mum’s nut roast off the face of the Earth. After some of the atrocities I have created in my poky little kitchen this term, I thought the death sentence of cooking organs and whatnot was written in stone, but it has been sponged out. I still suspect that my loyal readers, both of them, may be more deterred by livers, trotters and tripe now than they were before I embarked upon this journey, but, in spite of my failure, I am optimistic that there is a nose to tail renaissance yet to come. It has occasionally been fun, and usually disturbing, but the time is drawing near, and so there is little left for me to say but that I wish anyone who has bothered to read any of my nonsense a bloody offal Christmas. 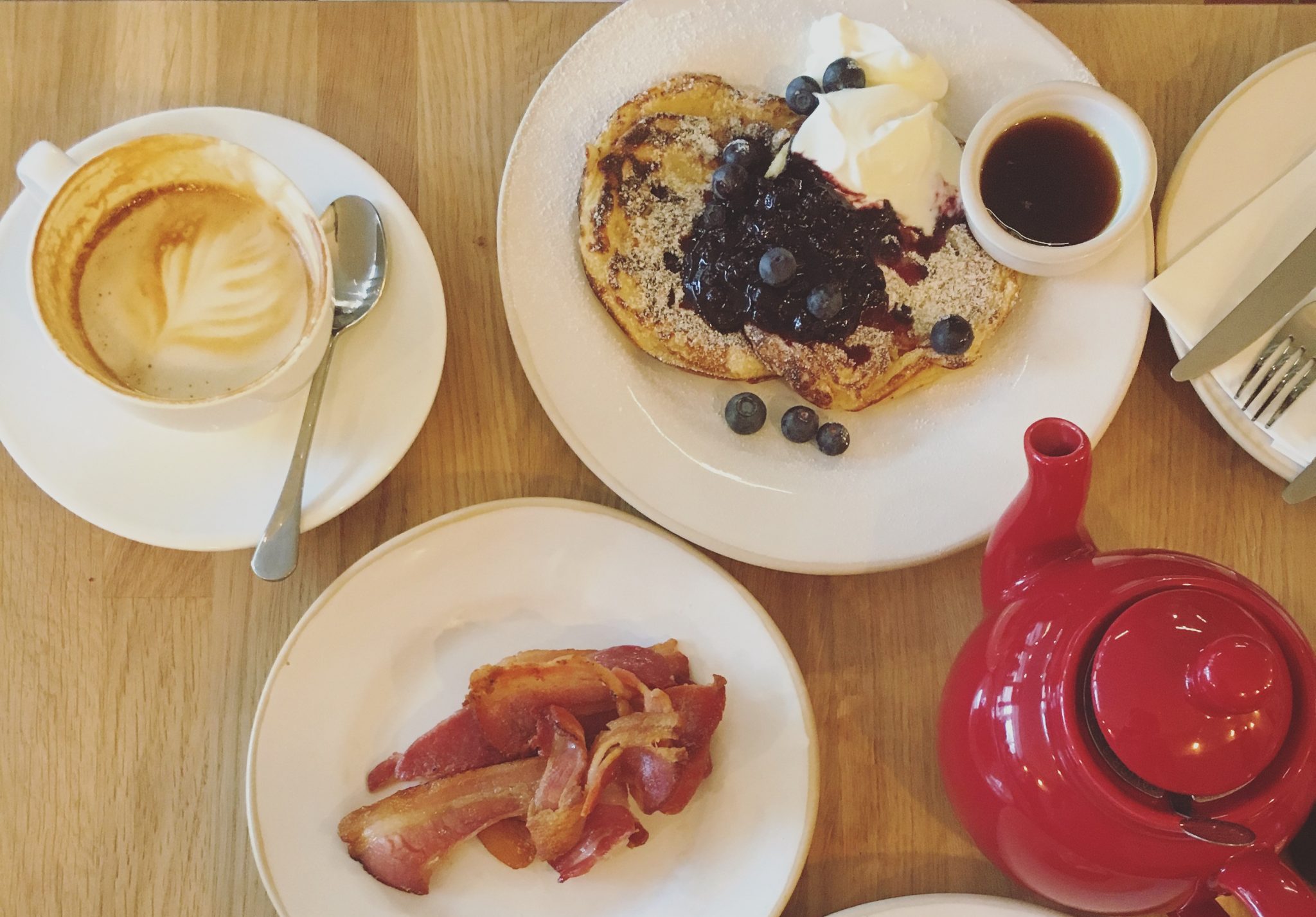