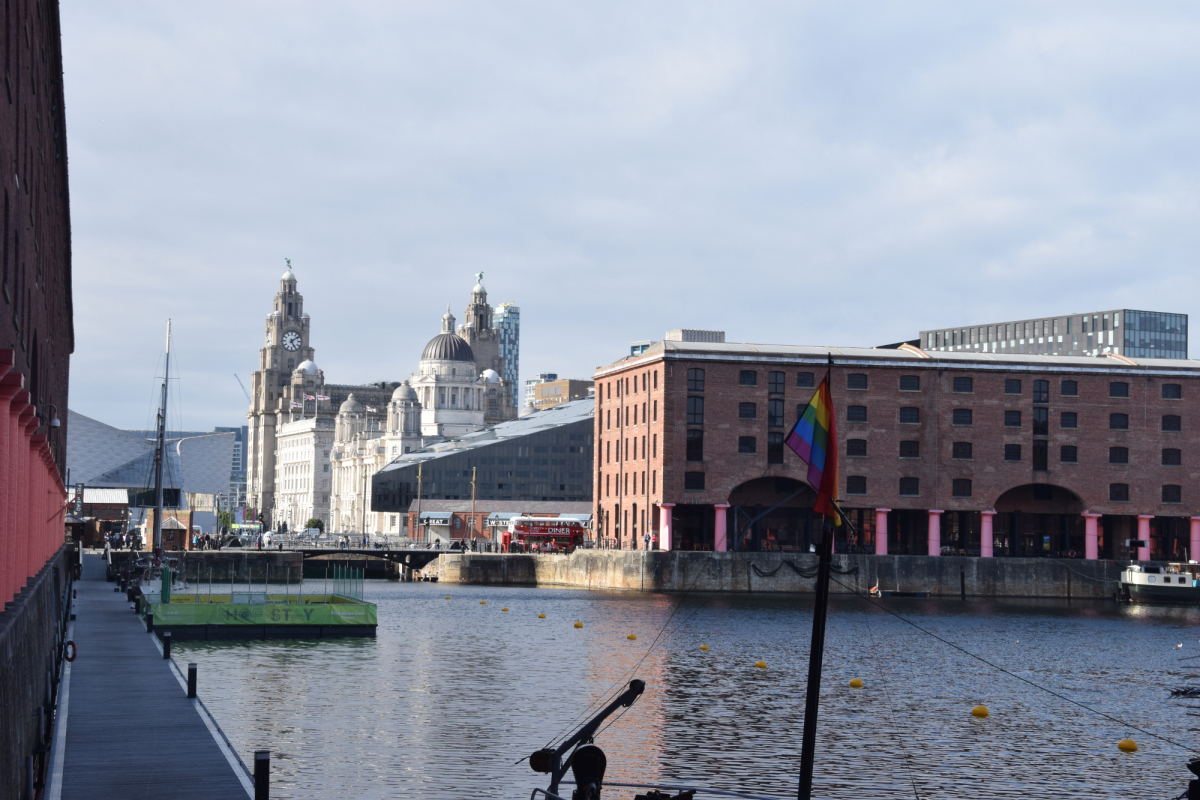 Escaping Oxford: A daytrip up to Liverpool

All images by Alex Homer. Description: a view of the Royal Albert Dock, Liverpool.

Journey time: approx. 3h40–4h (usually two trains, with the interchange station depending on the time and day of travel)

The distance is probably the main problem with Liverpool. It’s not hugely suitable for a day tripper—indeed, you can’t do that unless you get up really early, and I don’t know about you but I’m so tired all day when I do that.  (There’s an airport too, but flying is probably not quicker.  I would drive my car up the long and winding road there instead, but you won’t see me doing that as I don’t have one.)  The cost of a ticket to ride the train there is also probably a negative of the city, though by booking in advance you can make it cheaper—booking yesterday for a trip today would have cost you a fair bit, so you should avoid waiting until the night before.

It’s worth starting by saying that Liverpool is home to the National Museums Liverpool, in case that surprises you.  These are all free museums, nationalised in the eighties, and so part-funded by the taxman; we visited one, which was the Merseyside Maritime Museum.  No yellow submarines were on display, or even of any other colour, but there was a comprehensive display about the Titanic, and another about the Lusitania.  And there’s a place even for a gallery about life as a gay man in the navy, which was, erm, questionable in some of its language choices (the word “fruits” appeared), but I emailed the gallery and they told me they’re updating it—and although it’s hard to believe that any time at all that was okay, I’m not surprised that it was considered okay in 2006, when the (clearly well-intentioned) exhibition was made.

But I should get back to describing the city.  The museum is on the Albert Dock, which is now home to the Tate’s outpost in Liverpool, along with restaurants, gift shops, offices, and a play thing that I’m sure I’d have loved as a little child—indeed, I think a girl or non-binary kid (or another girl) would have loved it too, not just boys—but I’m probably a bit old for it to be socially acceptable now.  (When I’m sixty-four I’ll take my grandchildren there, and then I’ll get to enjoy it too.)

… I want to tell you in particular to go up the tower: there’s an amazing view over Liverpool…

A modern shopping centre, open-air, with a staircase made of artificial grass steps, next to a red-stone wall. Beneath is a long precinct with many pedestrians, and to the left a modern hotel building, white with many high windows. In the background are red-brick high dock buildings, one with a red-painted portico, and a red-brick chimney. A view across a dock, with red-brick buildings around the edge. There are no boats in the dock; it is large and square. There is a colonnade around the dock, supported by red pillars (which are all that can be seen at the extreme left. Through a gap in the dock buildings on the far side to the left are more stone buildings, and part of one made of glass. One of the stone buildings has a central dome in a tower. Behind that is a building with two towers, one of which has a clock; both towers are topped with a small copper bird. Looking towards a modern observation tower: white concrete, with an overhanging cylinder at the top with glass walls, and writing around it reading “RADIO CITY 96.7” in yellow on black. Above the main glass portion is a cylindrical red banner, that reads “LIVERPOOL 2018”. This is seen through a gap in buildings: on the left is brick and on the right is concrete and glass, and in front of them a large boat carrying some smaller boats.

A museum with the text “MUSEUM OF LIV…” is visible on its side. The lower part of the museum building is obscured by a zig-zag ramp with glass railings. Above that is a metal box (irregularly-shaped with sloping walls), one side of which has a large window area made of smaller panes, with “IMAGINE PEACE” visible in the windows. The dark sky is visible around most of the building. The River Mersey is visible in the background, with a few people walking along it. The front of a statue of a lamb, with part of its banana-shaped tail obscured. The lamb is painted with a design with a sea and fish on the lower half, and an abstract tree with birds (some on the water, some in the tree) on top and on its head. Behind it is a metal building. A parade of four painted lambs whose tails turn into bananas. The front one is painted like a clown; the designs of the ones behind are less visible. To the right is a metal building, with a glass wall in the lower part. Behind the precinct on which the Superlambananas stand is a waterway, and behind that are red-brick dock buildings.

Two other attractions are the two cathedrals, Anglican and Catholic.  The Anglican is huge—the largest by volume in the country, and (do you want to know a secret?) was designed by the same person who designed the red telephone box, and there’s one of the latter inside the cathedral (a listed building inside a listed building).  Ask me why you should visit, though, and I want to tell you in particular to go up the tower: there’s an amazing view over Liverpool, and you only need to climb steps at the end, because there are two lifts taking you most of the way.  (But you should hope it doesn’t rain, because the top has no shelter and you’ll have to head down.  You also definitely need a head for heights, or not to look when climbing: the stairs cling to the inside of the cavernous bell chamber, so I was very aware that if I fell I’d be hurt, and if I needed someone to give me medical attention I’d have to wait for ages for them to get there, no matter how loud my cry of “Help!”, or how much I’d twist and shout.  Usually I feel fine in such places, though, as long as I slow down if I get dizzy.)

In addition, I need you to consider visiting the Metropolitan Cathedral too, the Catholic one.  I’m sure I’ll get you to go if I tell you about the unusual architecture: it’s a huge concrete tent-like structure, with the congregation in a circle around the altar.  And if not, all I’ve got to do is mention the crypt—the only part of a much larger Lutyens design for the Cathedral, which was designed to one-up the Anglican one in scale (and be the largest cathedral in the world, this time measured by area).

This article was previously published on Escaping Oxford.