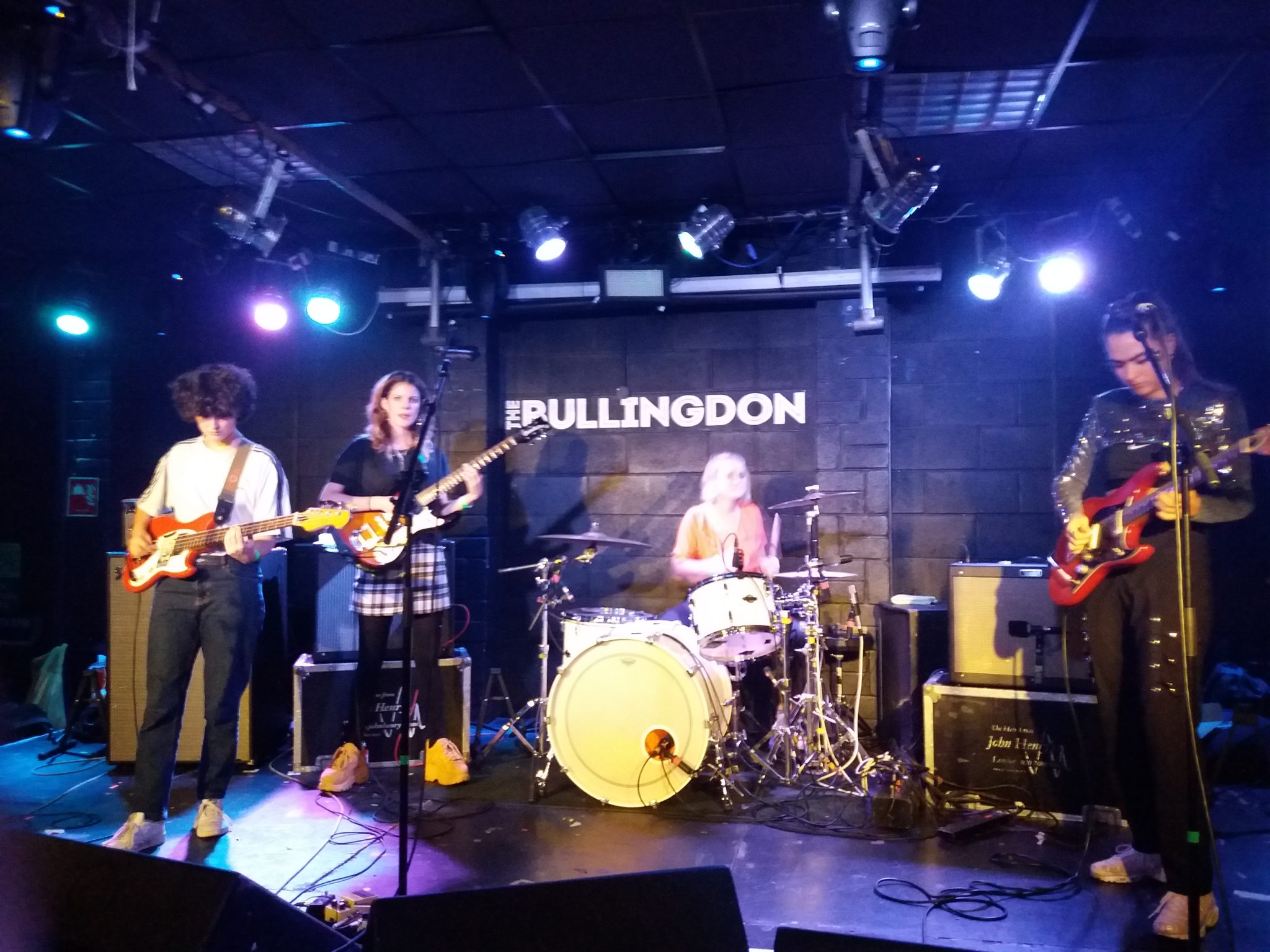 Hinds and Sports Team at the Bullingdon 19.11.18: views from the mosh-pit

I’m embarrassed by the number of times people have remarked that my oxblood DMs look new. Clean boots are no claim for pride. This is my belief. The more worn, torn yet crucially intact the footwear, the more authority and experience you will exude, and the more readily you will be able to convince others that you spend far too much of your spare time thinking about indie-rock bands. The solution: frolic madly in mosh-pits to more Hinds and Sports Team gigs, preferably when both are on the same bill. Thankfully, at the Bullingdon, on a cold Monday night in Oxford, they are, and the scratches, bruises and Amstel stains on my once-clean boots will prove that they were.

“Headliners Hinds own it. All smiles and struts, the four-piece are the electric expression of youthful mischief and freedom.”

Heralding from Madrid, headliners Hinds own it. All smiles and struts, the four-piece are the electric expression of youthful mischief and freedom. There’s a moment in the encore when the guitar-wielding front line of Costas, Ana Perrote (guitar) and Ade Martin (bass) bunch together to strike a tableau of aesthetically balanced levels and lines. The guitars they hold at exquisite angles then slowly crank up the chords to ‘Castigadas en el granero’ (which translates as “Grounded in the Barn”, if you were curious). There’s a joyous sense of playfulness in all of this, one that summons up the most child-like and carefree spirits of rock ‘n’ roll.

Their set tonight is a delicious collage of the band’s two LPs – 2016’s Leave Me Alone and I Don’t Run, released in February of this year. Openers ‘Soberland’ and ‘Chili Town’ increase the heat until new single ‘British Mind’ is unleashed and the dance truly begins. At this stage in the proceedings I take refuge by the front rails while embattled by the maelstrom behind me. My composure is brutally tested. A hair-shaking rendition of ‘San Diego’ has Costas leaning over the crowd to whip up frenzy, and ‘Garden’ is also wild. But there’s a moment where I’m transfixed. They ask, “Who likes the Clash?”, before bursting into a cover of ‘Spanish Bombs’. I picture myself as a child, dancing to my Dad’s Clash CDs, and for a moment I am taken back in time.

“I cannot help but adore this band…I’m sweating with love for Hinds.”

All of that is expelled during ‘Tester’, when I think, “Fuck it”, and dive into the fray. The track is one of their best, showcasing all their strengths: emphatic, screaming choruses and cheeky guitar interplays – “This song’s written by bad-ass women for bad-ass women”, the band defiantly announce. Next, Perrote takes the mic for ‘Rookie’, charges to the front of the stage and supports herself with one hand on the light rigging before dropping into the crowd as the final chord rings out.

I cannot help but adore this band. It’s their first time in Oxford, they reckon, and Costas’ reflection on this fact is the sweetest: “This is the first time it will be the last time”. Too true. They close with a rampant, ‘New for You’, leaving the stage to the sounds of Monty Python’s, ‘Always Look on the Bright Side of Life”. I’m sweating with love for Hinds.

That Sports Team’s set preceded all of this is almost cruel. You’re asking a lot of an audience’s physical endurance to have them come on as support. This is now the 4th time I’ve seen them in as many months. Their confidence and aptitude to captivate an audience is demonstrably growing.

“You’re asking a lot of an audience’s physical endurance to have Sports Team come on as support.”

To start, the tall, bespectacled Rob Knaggs takes the stage alone and beats out a few filthy chords as the rest of the band assemble. Frontman Alex Rice saunters up, his lank hair over his eyes in a 60s British Invasion fringe, and he sings of a “hairline that talks to God on the Central Line” and of “eyebrows that fuck with angels.” Then the driving ‘Camel Crew’ kicks in, and the band ignites, hotter than ever. The instrumental break during ‘Beverly Rose’ is so frenetic that my senses explode and Rice’s body flails outwards like fireworks to keep himself inspired.

Significantly, there’s a new song aired tonight, one without a name, and which I’ve not heard before. Rice delivers a falsetto hook that recalls the sugary pop of Swim Deep. He also takes his mic side on and incants an artful spoken-word section. Ben Mack is pulled away from playing the Wrigley’s Extra Mints to cook up a glitch-festival on his keyboards. (Perhaps this the track with the “Miami Beach Vibe” we were warned about when they to spoke the Oxford Student last month).

“Rice leans on the rails, his body looming over me like a storm. ‘I wish them death from above,’ he curses.”

They close their set with what to me already feel like classics. ‘Kutcher’ lights up the room, which I don’t think it can fail to do, and ‘Stanton’ showcases itself once more as the pinnacle of their live show. Rice leans on the rails, his body looming over me like a storm.  “I wish them death from above,” he curses, before the chaotic climax comes and I’m pulled apart in all directions amidst the thick of the crowd. And this was the support band.