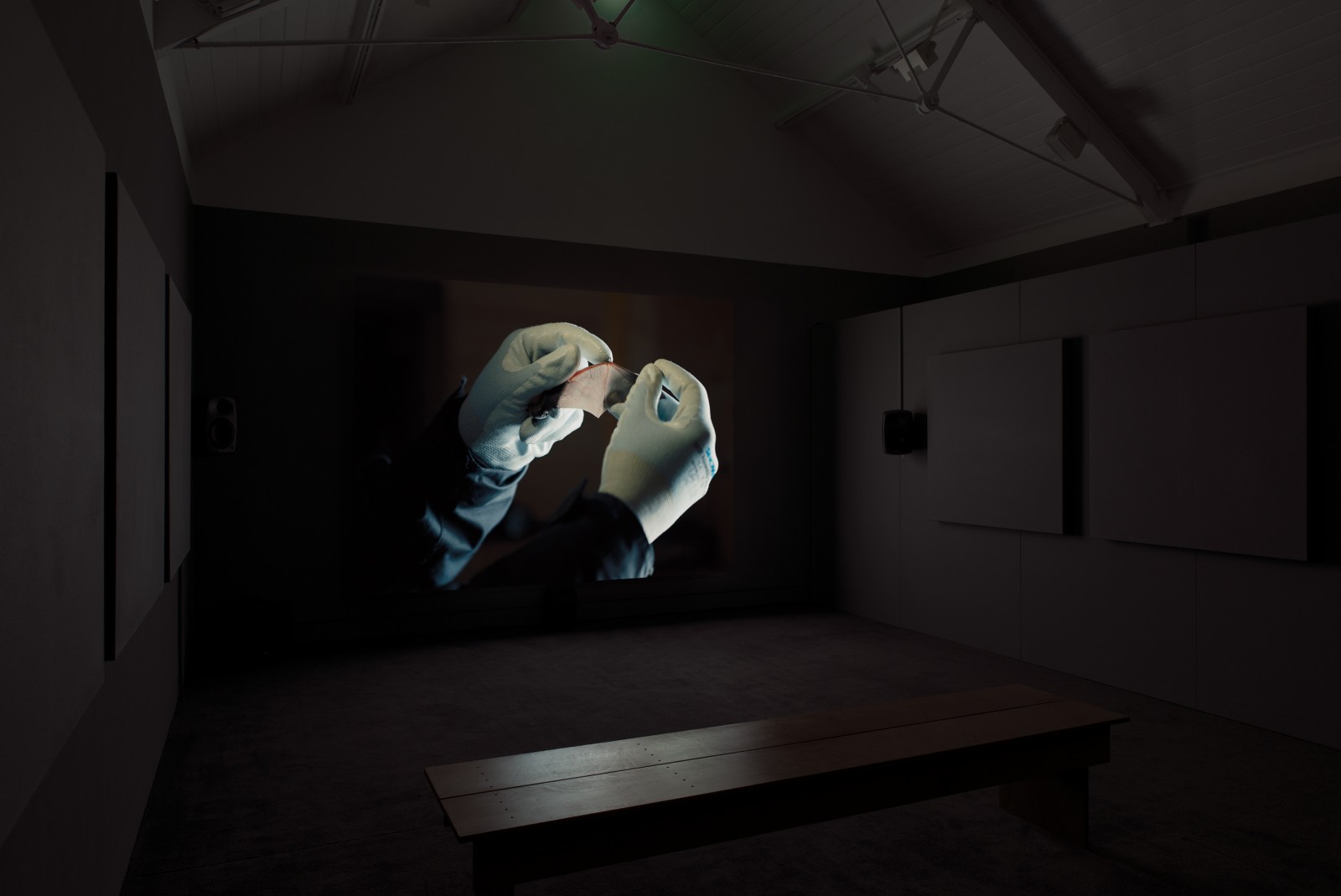 Now in its fifth edition, the Jerwood/FVU Award is a major annual arts prize showcasing works from emerging artists who use moving images as a part of their practice. It is an open-call programme, inviting artists to respond to a contemporary ‘future-facing’ theme in society; this year the title was Unintended Consequences. The project awards £20,000 to two winning artists’ proposals for them to create their brand new work over a 10-month period. This year the winning artists, who must be within the first five years of their practice, were Maeve Brennan and Imran Perretta.

The title Unintended Consequences speaks to a contemporary era where global conditions and events are so changeable and unstable that, despite the plethora of information available to us, it is impossible to predict what our future might be. After the mayhem that was 2016, we have seen first-hand how unexpected the results of some events can be. Things that were once a safe bet are now no longer. Today we are living in an era of doubt where we need to reassess what the results of our actions may be. Imran Perretta and Maeve Brennan look at this theme from two completely different perspectives, one from the point of view of human society and the other from the ecosystem and geology. Contemporary experience is multifaceted and interwoven, making it difficult to navigate. How can we see through the murky waters ahead of us and consider the ripple effects of our actions?

“The film points at the mystery of the rocks beneath our feet and the sounds in the darkness above us.”

One of the selectors for the prize, George Vasey, discussed in his essay accompanying the show how the term “unintended consequence”, popularised by the American sociologist Robert K. Merton, has three forms, “beneficial, detrimental and perverse”: some drugs may be good for us but can have terrible side-effects; alongside antibiotics comes antibiotic resistance; and technology that has helped to fix our old problems has created entirely new ones. Essentially, even with the best of intentions, our exploits and inventions have the potential to create problems – and in some cases benefits – that we never could have imagined.

Maeve Brennan’s work Listening in the Dark (2018), considers our Anthropocene epoch – the age of significant human impact on the climate – in a video from the point of view of bats. The film, 43 minutes long, is inspired by an article Brennan read as a student about how bats were being found dead at the base of wind turbines. She learned that when they flew past, bats lungs were exploding due to a pressure drop behind the turbines’ wings. Here, despite being invented as an outwardly ‘good’ way of harnessing nature’s power, turbines were accidentally doing nature harm. Whilst something is solving one problem, another is formed.

Bats use echolocation as a way of seeing in the dark and the film became an allusion for this; how we should look beyond our own senses to explore and navigate the world. Brennan examines how scientific research into echolocation, particularly the experiments of Donald Griffin and Robert Galambos in the 1930s, opened a whole sensory dimension that was not previously known about. These experiments helped develop our use of sonar and radar. She also touches upon the ‘ecological arms race’ between bats and moths (a food source for bats), in which some bats ears have evolved to hear the frequency of moths’ wings, whilst moths in response developed ears in their wings to hear the bats coming. Alongside this, Brennan also looks at geology in her film, particularly Siccar Point in Scotland, which is hundreds of millions of years old, suggesting the vastness of geological time in comparison to our tiny space on Earth. The film points at the mystery of the rocks beneath our feet and the sounds in the darkness above us.

At the end of the film Brennan leaves us with a positive result of human intervention – that sea reefs are actually forming around the bases of off-shore turbines, which are in turn attracting seals, this being the antithesis to the fate of the bats. So, not all unintended consequences are bad. I enjoyed Brennan’s film, though it did at some points feel too conciliatory and genteel, and was maybe a little slow, but nonetheless it was engaging. It offered a new perspective into ways of seeing and how to examine our actions, even those that seem benevolently good, for unintentional side effects.

“The film is simple but effective, conveying the intense physical and emotional fragility of the refugee experience.”

Our evermore globalized world, one featuring multiple ongoing social and geo-political upheavals, has prompted the mass movement and displacement of many groups of people; an unintended consequence of this being migrant camps. Imran Perretta’s video 15 Days (2018) documents an anonymised refugee experience through the eyes of a man who has given himself the pseudonym ‘15 Days’. It considers how refugees are often dehumanised, demonised and nameless. Perretta’s personal background of coming from a migrant family – being half-Italian and half-Bangladeshi, and therefore being between borders – comes through in numerous pieces of his work. The 12-minute film is inspired by time Perretta spent in Calais and Dunkirk after the camp that was formerly known as ‘The Jungle’ was demolished. Here he found refugees living in the surrounding woodland. The alias ‘15 Days’ was used as it was the last time something had happened – a police raid – to the person involved. This seems a comment on the liminality of refugee existence and how time slips, becoming punctuated by events rather than anything else.

The film features computer generated imagery of a campsite becoming slowly more and more devastated; its thin tent getting sliced, beaten and gradually collapsing, perhaps a stand-in for the human form and representation of state violence. This is accompanied by footage shot by the artist and 15 Days and a monologue based on conversations and interviews they had, discussing the refugee experience. The film is simple but effective, conveying the intense physical and emotional fragility of the refugee experience.

My only complaint was maybe the text presented in the video. The artist himself described how it was “heavily mediated”, and this comes across. For me, whilst there were hard-hitting moments and lines, it was slightly too on the edge of being ‘poetic’, more of an overview than a deep exploration of the subject matter. Though saying this, I can understand why a refugee would be unlikely to give deep personal accounts to an incoming foreign artist and why perhaps it was a subequently more poetic take.

Both works on show consider the liminality of existence and construct narrative using documentary modes; using interviews, archival footage and hand-held recordings of scenes. Similarly, they both touch upon the idea of the invisible, misunderstood or unnoticed; things that are difficult to record or represent. What is beyond the limits of our perception? We can be blind to the things outside our own sphere and these works argue against a ‘self-centric’ perspective of existence. The films seem to vouch for a more attentive attitude to tackling the problems of our world that might allow us to ‘open our eyes’ in the dark.

Both films perhaps suffer from being too ‘polite’ and some might complain that the works on show are too heavily focused in documentary. George Vasey, one of the selectors for the prize, commented that the two artists “make serious art for serious times” and that feels prescient. In our age of memes, satire and almost constant ironic jokes, it’s quite refreshing to see work that is straight-up, straight-forward and straight-talking about big issues. The works, though slow and meditative, are an eye-opening look into the consequences of our actions and worth a watch.

The finished films were first shown from April through to June in the Jerwood Space, London and are now on show at The Edge gallery in Bath. The exhibition is free and open until December 15th, 2018.