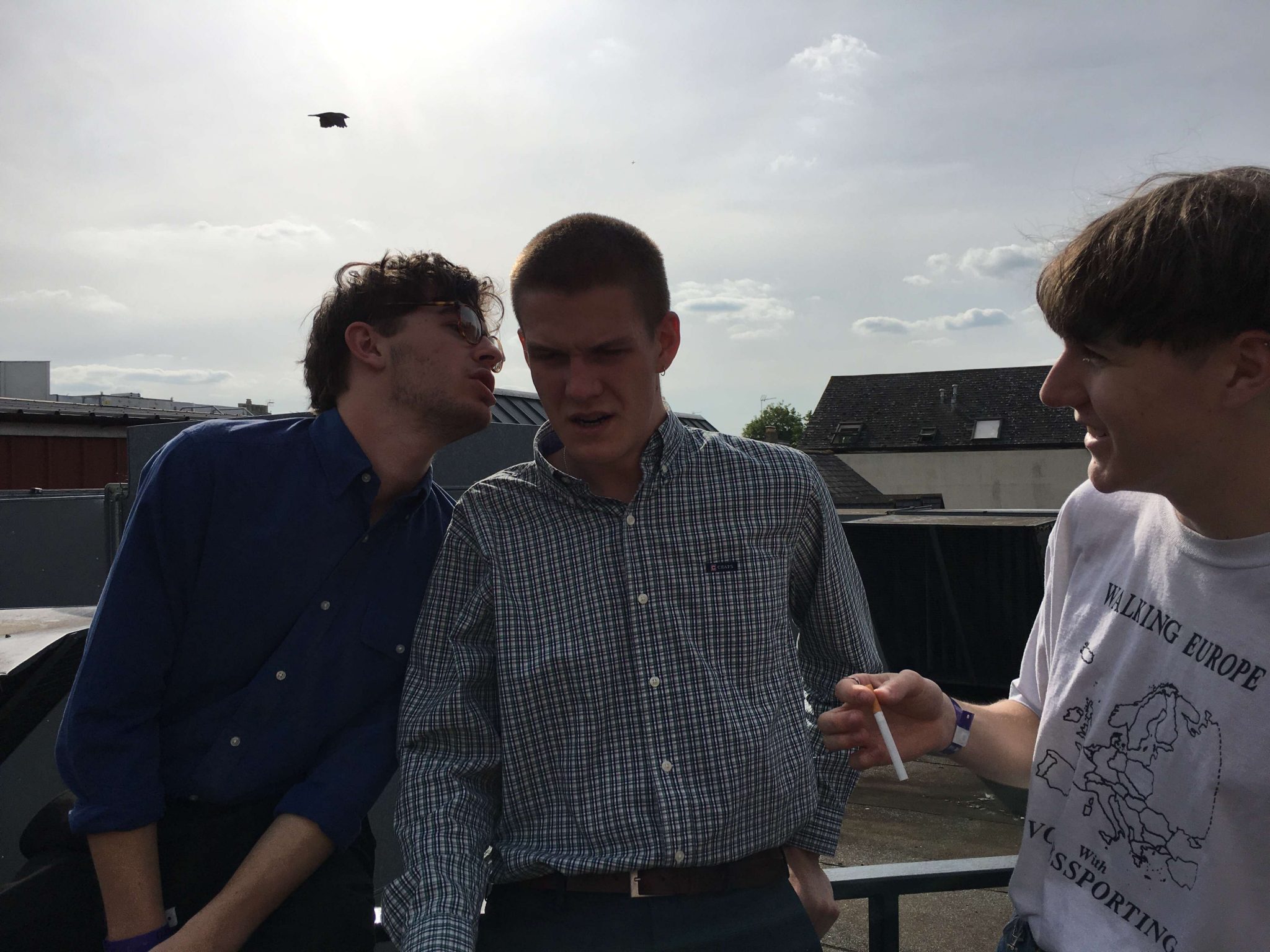 Lacuna Common, alongside contemporaries Self Help and the Easter Island Statues, find themselves at the vanguard of a flourishing Oxford scene that has been rather busy of late producing punchy, lyrical and upbeat guitar music.  Having recently received attention on the back of their new single ‘Lack of Knowledge’ – a gritty 3-minute slice of pithy punk-rock realism  – I caught up with the Abingdon three-piece ahead of a slot supporting Sports Team and Hinds at the Bullingdon to talk about the single, their origins, and the threatened closure of legendary local venue ‘the Cellar’.

I want to ask you first about your name, ‘Lacuna Common’? I think it really stands out on a poster. Where does it come from?

Gabe (drums): We were originally called ‘Filth’, but we had a bit of an argument with another band from the middle of nowhere. We started thinking if ‘Filth’ was really the best name for us – it doesn’t really fit our sound. Then we decided to change it. We were sat in Costa, one of the two in Abingdon. We liked the word ‘Lacuna’, so we looked for other words to go after it. We ended up coming up with ‘Lacuna Common’.

Alf (guitar, vocals) : ‘Lacuna’ means like, an abyss. We meant ‘Common’, as in a public place, a green, where people go to. We are filling the empty space with our music.

Your new single, ‘Lack of Knowledge’ is quite bleak, with images of people crying and not being very happy with their lives. How did the song come about?

Alf: I wrote the lyrics to it, and had a rough idea of how I thought it would go. We wrote it really quickly. Like most of our songs that seem to stick in the set list, they’re always written and done in half an hour, and we don’t really change them very much. It’s about people we always see out and about in our towns on nights out, doing nothing with their lives. They’re two or three years above us in school, and they’re still hanging about in Abingdon, doing nothing.

Tom (bass): [Abingdon] is a bit of a dead-end town to be honest. There’s not a lot to do in it. That’s where people get trapped in this cycle of going to the pub at weekends and wasting all their time.

Let’s talk about the origins of the band. Alf and Tom, you’ve been friends from childhood.

Alf: Me and Tom have been friends since were three or four. I met Gabe through working in a bike shop. We bonded over guitar music.

Gabe: We listened to music all day and did nothing really. I first met Tom at Truck festival in 2016.

Alf: For a year, I was like, “You’d love my mate Tom”. Then they met, and I think they preferred each other to me.

Tom: When we saw each other at Truck, all three of us went to see a band called Cassels. We were just stood in the crowd, and when they came out after the show, we were like, “we need to do something. We’ve just seen this beautiful thing.” We were inspired to be like that. And now here we are.

How long has music been part of your friendship?

Alf: [Tom] had two older sisters who were massively into music. My Dad is huge into music. We were both brought up on slightly different tastes, but they were both guitar music stuff. Tom was more Emo, Goth and Punk, but I was more 90s Britpop, Arctic Monkeys. It was all guitar music.

Did you always play music together?

Alf: We were in a little covers band where we played some songs together. We did ‘Rattlesnake Highway’ by Palma Violets. Attempted a bit of Peace. We did ‘Lovesick’, I think.

Tom: We did a few Two Door Cinema Club Songs. The Vaccines. The classic poppy, indie tunes. It was horrific.

Alf: We were called Target.

Are you full time musicians?

Tom: Gabe’s at Uni. He studies Music. Me and Alfie are still in college. I do Interior Design, and Alfie also does Music.

Gabe: We practice once every couple of months. I live in Bristol now. If we have a gig, I come down for the weekend and we practice the day before, and then we play.

I want to talk about the Oxford music scene, particularly the Cellar, which has recently been threatened with closure.

Gabe: [the Cellar] has been a second home for us for quite a while. We’ve done so many gigs there. It would be such a shame if it closed down. A lot of people know what Cellar is, and they’re not from Oxford.

Alf:. It would be such a shame to see it go because it’s been such a good venue for bands like us, Self Help, Radiohead, Supergrass, to cut their teeth at. It would help so many bands who maybe haven’t started yet. It’s certainly helped us get where we are.

Tom: If it is going to go, it’s not going to affect the music scene in Oxford on a grand scale, because it’s still going to have these amazing venues down the Cowley Road. But for local bands who are just trying to start off, I think that’s it going to affect them more than us.

Listen to Lack Of Knowledge by Lacuna Common here: