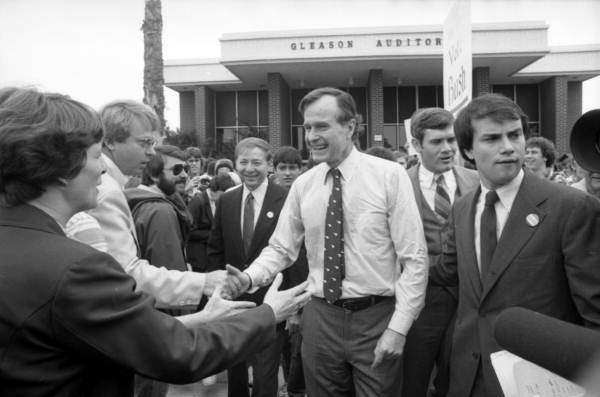 For many commenting on George H.W. Bush’s passing, his life and legacy have been used as a tool for expressing their views on contemporary American politics. On the one hand are those who herald him as “the anti-Trump”, using his long career of service and respect for his office as a template for how a president ought to behave. On the other are those that scorn him as complicit in the rise of Trump and “the archetype of the modern GOP”. This division traces the schism between the liberals who see Trump himself as the problem, and those that see him as merely the most overt expression of the moral corruption at the heart of the Republican party.

Bush, however, was neither a model of good governance nor a mere partisan crony. To suggest either is to simplify history to fit a dangerous contemporary political narrative in which politicians are classified by false binaries: good or bad; legitimate or corrupt. The reality is that Bush, like most politicians, was a complex figure, whose life defies easy categorisation.

At his core, George Herbert Walter Bush was a man of substance, who had little patience for flashy rhetoric or unwavering ideology. During his political career, he was mocked for his inarticulacy; his rambling sentences and lack of flare stood in stark contrast to both his predecessor – Ronald Reagan – and successor – Bill Clinton. For Bush, actions spoke for themselves, and boasting about them was both unseemly and unnecessary, a belief instilled by his mother, Dorothy, who reprimanded him when he spoke only of his own triumphs. Indeed, unlike all other modern presidents, he chose not to write a memoir, instead publishing a collection of his contemporaneous writings and allowing the public to draw its own conclusions. This emphasises the point that, in Bush’s eyes, what mattered was not glory, but doing something and making a contribution – something he certainly achieved.

“He brought a wealth of expertise and experience that he converted into intelligent and effective policy making.”

In his youth, he exemplified the virtues of courage and patriotic duty by volunteering to serve after the bombing of Pearl Harbour – an act of bravery that proves false the caricature of him as soft and weak due to his preppy upbringing. In government, he was a prudent decision-maker, especially in international affairs. Having served as Ambassador to the UN, Special Envoy to China, Director of the CIA and vice president before becoming president, he brought a wealth of expertise and experience that he converted into intelligent and effective policy-making. He was crucial to bringing about the reunification of Germany by lending it his support, and he worked constructively with Gorbachev to achieve a smooth end to the Cold War. The First Gulf War, meanwhile, was a swift and successful military intervention which enjoyed broad multinational support and remained respectful of international law.

In domestic matters, too, he was a far better president than he is often given credit for, particularly regarding his handling of the economy. Though the Clinton campaign focussed relentlessly on the economic downturn and deficit in the 1992 election, the situation was not nearly as dire as it was portrayed. The recession’s impact was real, but it was also shallow and short-lived – the economy having already entered recovery by the end of the election – and came at the end of one of the longest periods of growth in US history.

However, Bush’s humility and emphasis on actions were also liabilities. Nowhere was this clearer than on the campaign trail, where – compared to other presidents – he was notably unsuccessful. Prior to becoming vice president, the highest elected office he had held was that of House Representatives, having lost two elections for US Senate. His victory in the presidential election of 1988, meanwhile, was more Reagan’s victory than his own. Politics simply didn’t come naturally to him, in large part because he couldn’t understand why people would care more about the words you used than they did about your character.

Significantly, this political weakness pushed him towards awkward populist appeals. This could be benign, as when he naively over-committed himself with the pledge, “Read my lips: no more taxes”. Yet it could also be dangerous, as with the ‘Southern Strategy’ of appealing to the racial biases of white Americans for electoral gain. During one of his Senate campaigns, in 1964, he criticised the Civil Rights Act, for example, while in 1988 he used the controversial Willie Horton Ad, which many considered designed to stoke racial fears.

This populist posturing never felt quite natural on Bush. He came from a Yankee tradition that his son would call “compassionate conservatism”. In college, he led fundraising efforts for the United Negro College Fund. When in Congress, he voted for legislation that made the refusal to sell or rent property on the basis of race illegal. And as president, he hosted Nelson Mandela, describing him as “a man who embodies the hopes of millions”. Additionally, with the Americans with Disabilities Act of 1990 and Immigration Act of 1990, he helped expand the rights of two severely marginalised groups in society. Yet his passivity on civil rights issues and adoption of racialised campaign tactics are indicative of a casualness in his concern for minorities.

“His unfailing civility towards his political opponents feel genuinely lost in our current age of division.”

This passivity speaks to a broader problem, too. Bush’s desire to render service to his country was genuine but too simple, lacking specificity or vision. At best, this made him a clear-sighted realist, but at worst bred a lack of ideological vision. This led him to concede ground to the less moderate factions in his party, embodied by the likes of Reagan, Gingrich and Atwater. It also meant that as president he ignored vital issues like AIDS and poverty, and failed, domestically, to deliver anything more than competent stewardship.

How much, then, should we mourn when we mourn the death of George H.W. Bush? Clearly, he was an honourable man, deserving of respect for his humble devotion to his country. Moreover, the ‘kinder, gentler politics’ he advocated and his unfailing civility towards his political opponents feels genuinely lost in our current age of division. So too does his brand of pragmatic, internationalist Republicanism, which has been overtaken by Trump’s white nationalism.

Yet while Bush deserves our admiration, we should not ignore his faults, nor see him as the last representative of an age of good governance. It’s true that Bush was the last president from a generation characterised by a sense of patriotism and duty, borne of their involvement in the Second World War. Yet this was also a generation defined by its exclusionary sphere of concern, being conflicted in their response to the civil rights movement and often dismissive of women, with Bush having been accused on multiple occasions of inappropriate behaviour towards female staffers.

We should therefore see George H.W. Bush for what he was: a good man and fine custodian of the White House, compromised by his lack of purpose and moral integrity, whose career is worthy of praise, but not emulation.