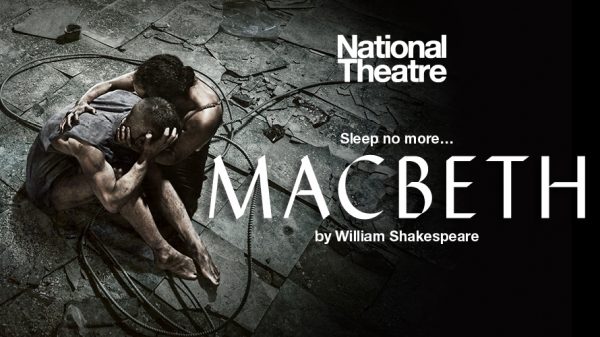 It’s not easy to produce a convincing Macbeth; what is simply breath-taking on the printed page may well come across on stage as simply breathless. Beginning with a semi-prologue that barely lasts a page and a half, I can’t help but always feel jolted into the play.

The reading eye can pass over the suddenness with which the witches begin and end their opening vignette, but on stage it’s hard not to feel like you’re witnessing a false start. There are several similar jolts throughout the play as it moves through so many vastly different landscapes in such a short space of time that the stage starts teaming with the incoherence of cramming battleground, regal court, thunderous, barren landscape, and castle all under the same proscenium arch.

Rufus Norris’ production was not helped by the intrinsic difficulties of the play nor the rather unfortunate proscenium arch. Oxford’s New Theatre has a rather startling bright red arch lined with gold patterns that bulges over the stage like the architectural equivalent of a clown’s lower lip: not quite the setting for the wrongful King of Scotland’s downfall. The mock-gothic aesthetic of the production, with overhanging black foliage and deadened mop-head trees, was certainly not going for beauty.

A few characters were afforded a spot of colour against this scene of military destruction: the regal red suit first belonging to Tom Mannion’s elegant Duncan then Michael Nardone’s Macbeth is set first against the bright green of Lady Macbeth’s coat, before her coronation translates this into the monarchal shimmer a sparkling pink dress.

These unsettling colour combinations must surely have been designed to produce discomfort, somewhat unnecessary in a production that decapitates several characters and parades their heads in plastic bags (a trick that would have been more convincing had the trap door through which the actor’s body was pushed not been visible, thus somewhat negating any attempt at suspending disbelief).

The mock-gothic aesthetic of the production, with overhanging black foliage and deadened mop-head trees, was certainly not going for beauty.

There was a rather overwhelming sense of plastic in the set design, from the blackened foliage overhanging the stage to the wispy costumes of the witches, and in fact Macbeth’s armour in the second half was actually fastened with what I’m sure was masking tape.

A play filled with imagined daggers dripping blood, ghosts, devilish witches and irrevocably-bloodied hands, might well slip into the histrionic in performance. This was largely avoided in the New Theatre, as actors tended towards more nuanced dramatic pianos and corrosive simplicity rather than screams and fortes. It is a performance that chooses to speak the words ‘Horror, Horror, Horror’ in deadened monotone rather than shout them to into the theatre’s acoustic.

Michael Nardone’s Macbeth certainly didn’t fall into the cop-out of an overly-shouty interpretation, and particularly in the second half this allowed for some delightfully lucid, delicate moments (though Patrick Robinson’s Banquo arguably stole the first half). Similarly Kirsty Besterman’s performance as Lady Macbeth was both chilling and captivating.

Individual performances that bent towards poignancy were rather overhung by a certain hysteria in the set, which ranged from gothic chaos to the bareness of a military base. Large structures such as two walls of the Macbeth’s house, to a giant ramp-like platform in the middle of the stage moved hap-hazard around the actors, building up a spatial confusion that became less and less comprehensible as time went on.

Norris’ production focuses on the fragmentary, ugly qualities in the play, and although this did not produce the most convincing framework for Macbeth, there is some interest in watching the play’s traumas and instabilities exaggerated to plastic effect, made plausible by certain individual performances.