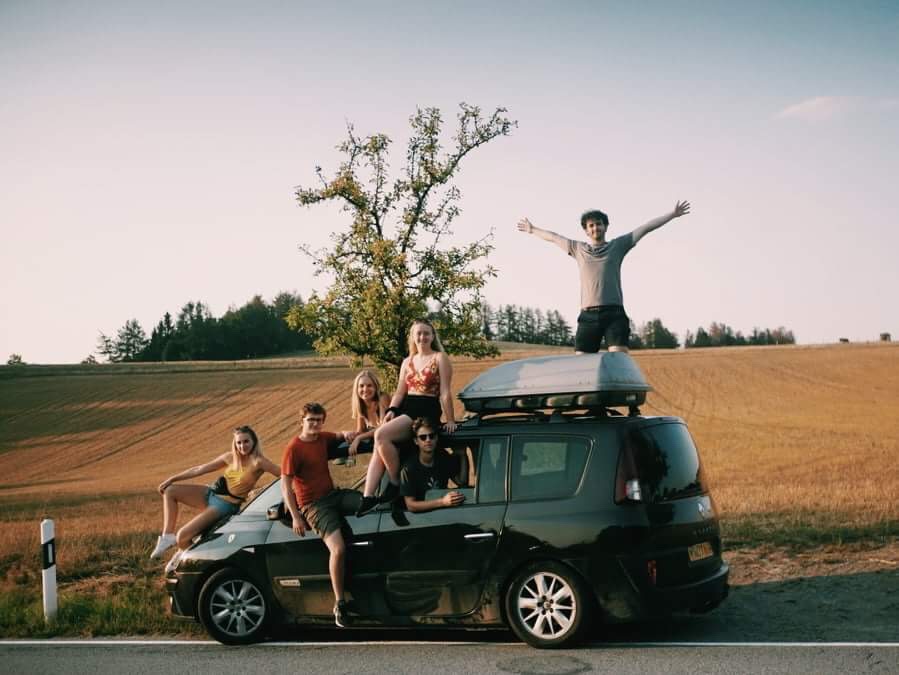 This summer, me and 5 of my friends went on the most stereotypically coming-of-age holiday possible. Comprised of 3 film students, a ballet dancer and two Oxford biologists (yay!), we had the makings of a semi-functional group of 3 couples that could just about bear to live in each other’s pockets for two weeks straight.

Our greatest blessing along the long and winding road to getting this idea of the ground was that one of the boys’ parents just so happened to have a spare Renault Espace lying around in their driveway. Why, you ask, was this people-carrier not being used to its full potential by the parents? Because it was “broken”, they said. It took 4 of us one afternoon to fix it using YouTube tutorials – and they call biology a soft subject.

Thus began the longest day of my entire life. I collected the car the afternoon before D-Day, and the troops descended, roof boxing and aux-cording it to within an inch of its life. The ferry was booked for 7am the next day from Harwich, which is disgusting enough on its own, let alone when you consider the fact we were leaving from the decidedly distant town of Sheffield. After a full day of prep and approximately 45 minutes of sleep, we set off at 1am on our adventure, equipped only with minimal planning and a keg of Desperado beer.

I was one of the three drivers (the other three essentially free-loaded their way across Europe in my opinion), so I had the great honour of driving for the first time on the right-handed (wrong) side of the road when we landed in Holland. For context, I’d driven on a total of one motorway before, full-stop, so as you can expect, I was fairly nervous. By the end of the trip, and to this day, I’ve driven further on the right-hand side than the left.

I drove us (expertly, may I add) to Amsterdam, where we found a cute campsite within walking distance of the centre. That evening, I saw my first real-life prostitute, drank my first full litre of beer, and walked about 10km, so overall it was an educational evening. By the time we made our way back to the campsite at 2am, I hadn’t slept in 42 hours and was what can only be described as “turious” (tired furious). We did some more exploring the next morning, concluding that Amsterdam is a beautiful, vivacious city that I would love to come back to. As was the theme of the whole trip, we packed up and left in record time, stopping off for a dip on the North Coast of Holland, before driving the behemoth 700km to Berlin in a single evening. The logical thing to do upon arrival at midnight would be to go to bed and rest after this ordeal, so naturally we all headed out to some bars and got in at 5am, after some mozzarella sticks.

Berlin was personally a let-down, but I think we did it very wrong. We did spend most of our time there in Berlin Zoo, and seeing wombats was truly a highlight, but it wasn’t the wild time we expected. I mean, we ended up at an over-30’s disco on our last night there.

After Berlin we headed into the Saxon-Switzerland national park, which marks the beginning of my favourite section of the trip. Waking up in the morning with no idea where we would be sleeping the next evening would be a nightmare for some, but it was kind of thrilling to me (sorry, mum).

To the protest of many (me), we climbed a very steep hill to get to Bastei bridge, which is a centuries-old stone bridge built between these huge rock formations, looking out over a spectacular river valley. The sun was setting and nobody else was there when we were, which just made the views even sweeter. The next day we rowed a dinghy down that same river and got the view from the bottom up. These are the moments I was very glad that we had three very good photographers in the form of the resident film students; they have enriched my Instagram to no end.

Next up on our whirlwind European tour was Prague. As I’ve told everyone I’ve ever spoken to, Prague is amazingly cheap; I had 3 cocktails and a two course meal in a restaurant that came to £15 (I know?!). Unfortunately, the Astronomical clock was scaffolded up when we were there, so now I know how the tourists in London feel when they look at poorly Big Ben.

Country number four was Austria, where we happened upon a campsite right next to Lake Attersee. This serendipitous find gave us the best night of 2018. The sun was setting over the huge, turquoise lake as we put on our swimming costumes at light speed and jumped off the pier in into the water. The water was so warm and clean, and the sunset was one of the most beautiful things I’ve ever seen. Once night had fallen, we then proceeded to drink a bottle of gin between the six of us. The evening was only marred by hearing rhythmic squeaks emerge from one of the other couple’s tents, which of course we recorded for future blackmail.

The next lake we arrived at was less tranquil. As we started looking for a place to camp, storm clouds rapidly descended, before erupting with waterfall-level torrential rain, accompanied by lightning bolts about 100m away from us. We drove through the night in this weather looking for any place we could stay, even considering sleeping in the car, before pulling up at a random hotel and begging for a room. The lady behind the desk had great chat, found us 3 single beds and gave us a free beer each, because “she was young once too”. Absolute legend.

The next day we stopped for a hot chocolate and a McDonalds up the only mountain in Liechtenstein, from which the view was the entire country (coincidentally, by area Liechtenstein is about the same size as Sheffield). This Maccies was neither the first nor the last one of the trip; we were forced by one of the boys to go to one in every country. After 9 countries, I swore to never eat there again.

Due to time constraints, the rest of the time was more road than trip; we drove through all of Switzerland and half of France in a single day. We had lunch in Luxembourg City, which was one of the most intensely European cities I’ve ever been to, before heading to Bruges. Bruges was like a PG version of Amsterdam, and I had a very nice but very expensive macaron. Our last night in Europe was spent in an Airbnb near Calais, which was filled with strange odds and ends such as a lamp cemented to a shoe.

The road trip was a tiring, sweaty ride but I made some of my best memories with some of the best people, at risk of sounding cliché. Plus, it only cost me 500 quid. Not too shabby for 3000 miles of European adventuring.