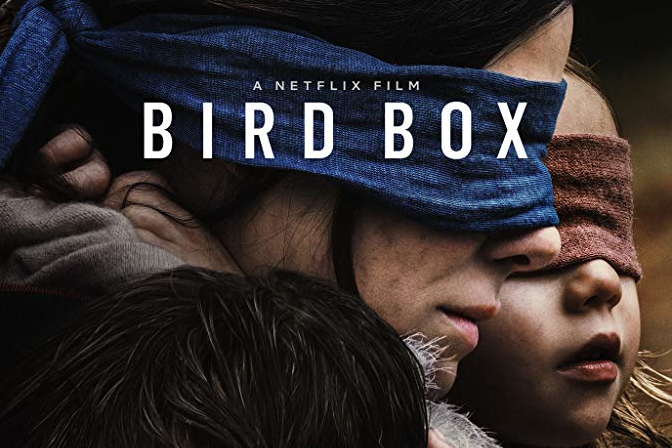 Fuelled by a heavy marketing campaign and blindfolded memes, Bird Box is Netflix Original’s biggest hit to date. The premise is pretty simple: Sandra Bullock plays tough mother Malorie, trying to protect herself and her two children in a post-apocalyptic world haunted by suicide-inducing monsters. These monsters never appear on screen directly, but we get hints of their presence through whispers and rustling leaves, as any character unlucky enough to look jumps out the nearest window or in front of the closest car.

And that’s it, really. Bird Box doesn’t concern itself with answering many of the who, what, how or why questions viewers might have. Twenty minutes into the film a nerdy supermarket employee (Lil Rel Howery) tells us about demons from various unspecific religions who bring about the End of Days — after providing this impromptu theory he leads the other survivors to a supermarket and, plot functions fulfilled, quickly dies. As the film progresses, all other supporting characters follow suit.

‘Don’t take off your blindfold’ Malorie instructs her children at the beginning of the film, before embarking on a last-bid river journey to an unknown place of refuge. “If you do, you will die.” The kids, bluntly named ‘Boy’ and ‘Girl’, stare back solemnly. The rest of the film cuts between the 42 hour river journey and the early days of the apocalypse. Unfortunately, the technique undercuts most of the drama’s suspense — since we only see Malorie and her children on the river, we (rightly) assume that everyone else is dead. The flashbacks, therefore, quickly start to feel formulaic as individual survivors are picked off.

In this world, there are two types of people: the assholes and the dead.

Underlying, or perhaps I should say overlapping, the apocalyptic storyline are Malorie’s own personal struggles with motherhood. Before the apocalypse, Malorie was a reluctantly pregnant woman holding an adoption pamphlet, chastised by her sister and doctor for her ‘ignore the problem away’ strategy. The script hints at a not-so-rosy childhood, and a fear of being unable to connect to her child that probably stems from her own parental relationships. Unlike her pregnant counterpart Olympia (Danielle Macdonald), Malorie hasn’t got a list of potential names, or planned a baby shower that will never happen. She even resists going into labour.

However, the hardness and lack of sentimentality that make Malorie tentative about motherhood turn out to be the qualities her children need most. As John Malkovich, playing the curmudgeonly Douglas, says, “In this world, there are two types of people: the assholes and the dead.” Olympia demonstrates as much when she takes pity on a stranger who turns out to be obsessed with the entities, tearing down the window coverings and forcing others to look. It’s fierceness, not compassion, that will save you.

Left with her own child (Boy) and Olympia’s orphan (Girl), Malorie’s love is practical. She drills in the importance of the blindfold, although the lesson doesn’t always seem to stick. She scavenges a bicycle bell, not as a toy, but as an alarm system. Worried about unrealistic hopes, she gets angry at Tom for telling the children stories about the past, to which he replies “They need a mother.” Sandra Bullock’s portrayal of a mother afraid to love her children too much proves to be the most compelling part of an otherwise mediocre film.

Overall Bird Box is entertaining, but predictable. It’s a popcorn flick perfectly suited for the holiday period, something to watch while you’re bored without being too upset at any interruptions. But if you don’t find time to watch it, don’t worry  — the memes are just as entertaining.