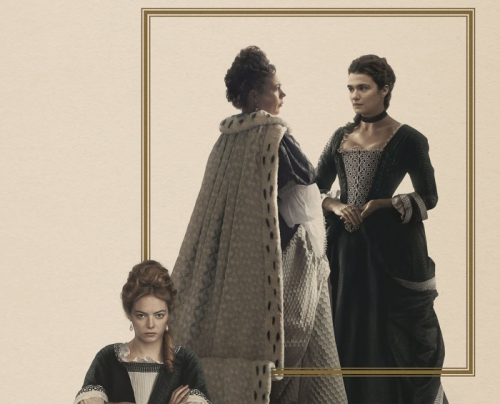 Yorgos Lanthimos’s excellent new film The Favourite is a bodice-ripper of a different sort. Gone are the breathy declarations love, replaced instead by absent-minded hand jobs and filthy jokes. Within the confines of a profoundly sordid royal household, we are treated to a spectacle of social climbing of the most devious sort. At times hilarious and at others tinged with sadness, it is a film which defies expectations of the period drama, leading us on a biting romp through the world of high society.

Set in the early 18th century with the brilliant Olivia Coleman as Queen Anne, a war rages both on the continent and within the palace walls. The Whigs want to fight on against France, the Tories want peace, and everyone wants to advance their own position within court. That means buttering up to the monarch, a volatile terror who swings rapidly between self-pity, petulance and rage, all the while retaining our sympathy as a victim of those who would exploit her.

Two such opportunists are Sarah Churchill, Duchess of Marlborough, and Abigail Hill, an obscure relative of Sarah’s. Portrayed respectively by Rachel Weisz and Emma Stone, the initial alliance between them soon degenerates as they vie to be the Queen’s sole favourite.

From racing geese for money whilst decrepit spectators pull their faces into expressions of despair or ecstasy, to feeding enormous hunks of cake to the queen’s flock of rabbits, The Favourite is a very funny, very bawdy, look into a world which one might assume to be genteel. By the time Queen Anne has explained her new predilection for Abigail to Sarah with the curt line ‘I like it when she puts her tongue inside me’, we know however that this is not a world of noble restraint and instead a rather more raucous affair.

Drawing from director Peter Greenaway, Lanthimos exaggerates the costumes; the Whigs and Tories are distinguished by hair pieces of brown and white, all of which cascade in ridiculous curls down to their waists, while abominably striped jackets, cuffs the size of dinner plates and ribboned shoes abound. Simply in terms of visual pomp, The Favourite is a sight to behold.

But it’s not all laughs – Abigail and Sarah’s scheming is in large part a function of their vulnerability. While the former relates a period as a prostitute with a funny streak of flippancy, there is no illusion that this was a happy time. Her determination to rise is in response to how low she has once fallen. When Sarah’s husband is off fighting wars, it becomes her duty to ensure the family’s fortune: failure can only mean disgrace and exile.

By the time Queen Anne has explained her new predilection for Abigail to Sarah with the curt line ‘I like it when she puts her tongue inside me’, we know that this is not a world of noble restraint and instead a rather more raucous affair.

Queen Anne, meanwhile, is surrounded by false friends, bound to her bed by gout, and outshone by the beauty of her supposed allies. At one point she breaks down in tears, describing the over a dozen miscarriages and still-births she has endured, leaving her childless. The rabbits, it turns out, are her reminders of those infants she lost, one for each which died: the coops in her bedroom, once straightforwardly comic in their eccentricity, turn into a desperately sad reminder that beneath the bawdiness lies a darker reality.

Despite the sharp script and wonderful design, casting remains the film’s greatest strength. Coleman has already received a Golden Globe for Best Actress, but it could have just as rightfully gone to Stone or Weisz, with both giving sympathetic performances while engaging in brutal acts of manipulation and betrayal; a difficult balancing act wonderfully executed. Even smaller characters shine in their roles. Harley, leader of the Tories, is played by Nicholas Hoult with a perfectly foppish ferocity which provides some of The Favourite’s best moments.

It’s not a perfect piece; for one thing, it’s perhaps a tad too long. Scenes of endless scheming are fun but perhaps a little redundant after a certain point. Nor is Lanthimos’ work entirely subtle – at one point a large, florid man in a giant wig is pelted with fruit while cavorting nakedly in front of folding screens. There are, after all, ways to express courtly decadence which are less on the nose than that. The same might go for shooting pigeons with enormous rifles as lines like ‘We’ll make a killer of you yet’ fly about.

It is of course designed to be over the top. Blasting defenceless birds out of the sky is acknowledged by both Sarah and Abigail to be far too symbolic to be taken as simple sport, and yet it’s easy to feel Lanthimos could have made the audience think a little more in parts, rather than serving up the occasional glaring metaphor to hammer in the foibles of his world. These are however quibbles, and film’s exaggerations are part of the fun. Buoyed by three brilliant leads who blend comedy with just a touch of tragedy, The Favourite delivers a powerful and hugely enjoyable spectacle.