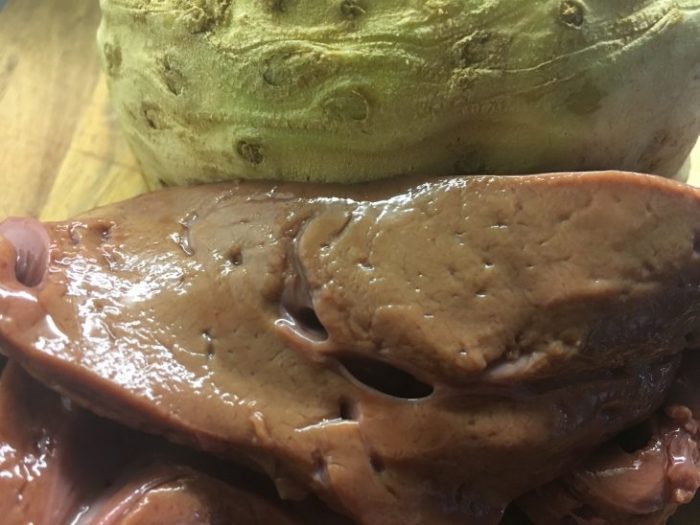 “This were all glaciers back in my day”, my fictional Neanderthal great grandfather grunts, racistly. “Of course, it’s not like that now – all these Homo sapienses comin’ over ‘ere, taking our flint”. The Palaeolithic diet has recently witnessed something of a resurgence, with its followers believing that a pre-agrarian diet is significantly healthier than the cereal and fat heavy diet our hunter-gatherer ancestors embraced around ten thousand years ago. But the popularity of this lifestyle is much to the chagrin of my fictional Neanderthal great grandfather, who not only despises the rest of the evolutionary tree of hominids, but also believes that those following this dietary trend are not taking it seriously enough.

The food is not to be seasoned, nor are you to add any oil, or anything which might lend the ingredients a degree of flavour. This is proper British food. And so, I set about securing ingredients in order to create a dish which might please my fictional Neanderthal great grandfather. Roots, fruits, seeds and meat are all staples of this diet – but which tuber to choose? I managed to find a nice lump of muddy starch in Tesco, and for added authenticity, given that this is a homage to the hunter-gatherer lifestyle, I stole it. My fictional Homo erectus great grandmother would be so proud.

There was the thorny issue of cooking – no number of pleading e-mails to the caretaker could persuade them to allow me to construct a vast cooking pyre.

Meat was a more difficult issue: something like venison would probably be the most appropriate, given that all of the mammoths are now dead (thanks, great grandad) – but I do not have it in my heart to spend money on a good quality piece of meat, only to ruin it by cooking it as a cave man might (provided that they had access to an electric oven). I then realised that Palaeolthic humans were probably very frugal – the sort who might favour a Wetherspoons – and therefore they would have probably eaten every part of the animal. I am not known for my love of liver, but, for this recipe, I was willing to give it a go. I would have bought some seeds and berries, but my fictional Neanderthal great grandfather realised that they had been cultivated abroad, and refused to eat them.

There was the thorny issue of cooking – no number of pleading e-mails to the caretaker could persuade them to allow me to construct a vast cooking pyre. “It’s political correctness gone barmy”, my fictional Neanderthal great grandfather grumbled, slightly less racistly, “these days you can’t even start a bonfire in a tower block full of students – honestly, Louis, it’s that PC brigade”. He then proceeded to mumble something about taking back control of Doggerland, before falling into a xenophobic slumber. I was pleasantly surprised that he had at least finally embraced the technology of fire, despite his grievances at health and safety legislation.

I baked the tuber I had gathered. Unseasoned, and without oil, I didn’t even cut it or peel it – there probably is archaeological evidence of flint tools being used for mise en place in this period, but there’s only so many Wikipedia articles one can read, and I certainly wasn’t going to use a knife, as that would be highly inauthentic. I had my electric oven at around 180°C and roasted it for about as long as it might take an experienced flint knapper to produce four and a bit hand axes. I added the liver for the last few moments (also unseasoned, of course), and then removed the tray.

Perhaps I am being too harsh on our Palaeolithic ancestors: they lived in a world before Delia Smith and globalisation.

I asked my fictional Neanderthal great grandfather what he would like to drink: “I don’t want any of that foreign muck. Bloody waves of migration from Asia Minor, comin’ over ‘ere, with their agriculture, cultivating barley like they own the place, and their brewing technology – we don’t want your beer! What’s wrong with some dirty water? It’s the Mesopotamian Liberal Elite”. The dish tasted about as good as you might expect the combination of baked root and liver to taste – unless, that is, you expected it to taste nice. Slimy vegetable matter encased in a leathery purse of unseasoned skin and overcooked liver, with its characteristic iron flavour at least serving the purpose of tasting nutritious. It is probably rather healthy, and certainly not a dish which made me go back for seconds (or another mouthful, for that matter), so, as food fads go, the Palaeolithic diet might be deemed a success, as it will cause weight loss.

Perhaps I am being too harsh on our Palaeolithic ancestors: they lived in a world before Delia Smith and globalisation. They worked with what they had and persevered through the Ice Age/s. Maybe we can learn something from them: we don’t need nice foreign food and drink, like halloumi and wine, to survive – we can overcome the obstacles ahead, and become better for it. My fictional Neanderthal great grandfather may have his faults, the most severe of which is that he doesn’t actually exist, but there is something to be said for his determination. He knows that he doesn’t have to stick rigidly to tubers and organs, but he is set in his ways. He is probably the most stubborn of my fictional non-Homo sapien relatives.

The hunter-gatherer lifestyle was perilous, with the risk of freezing to death or being eaten quite high, but can you put a price on freedom, particularly when compared to the long, gruelling hours of labour our ancestors endured with the arrival of agriculture, in exchange for a less nutritious diet? Are we really any better off now that we have chosen to move on from the past, construct settlements and develop a culture and cuisine which has been enriched by diversity due to our increasing interaction with other countries, thus also making society slightly more tolerant? Yes, we are.