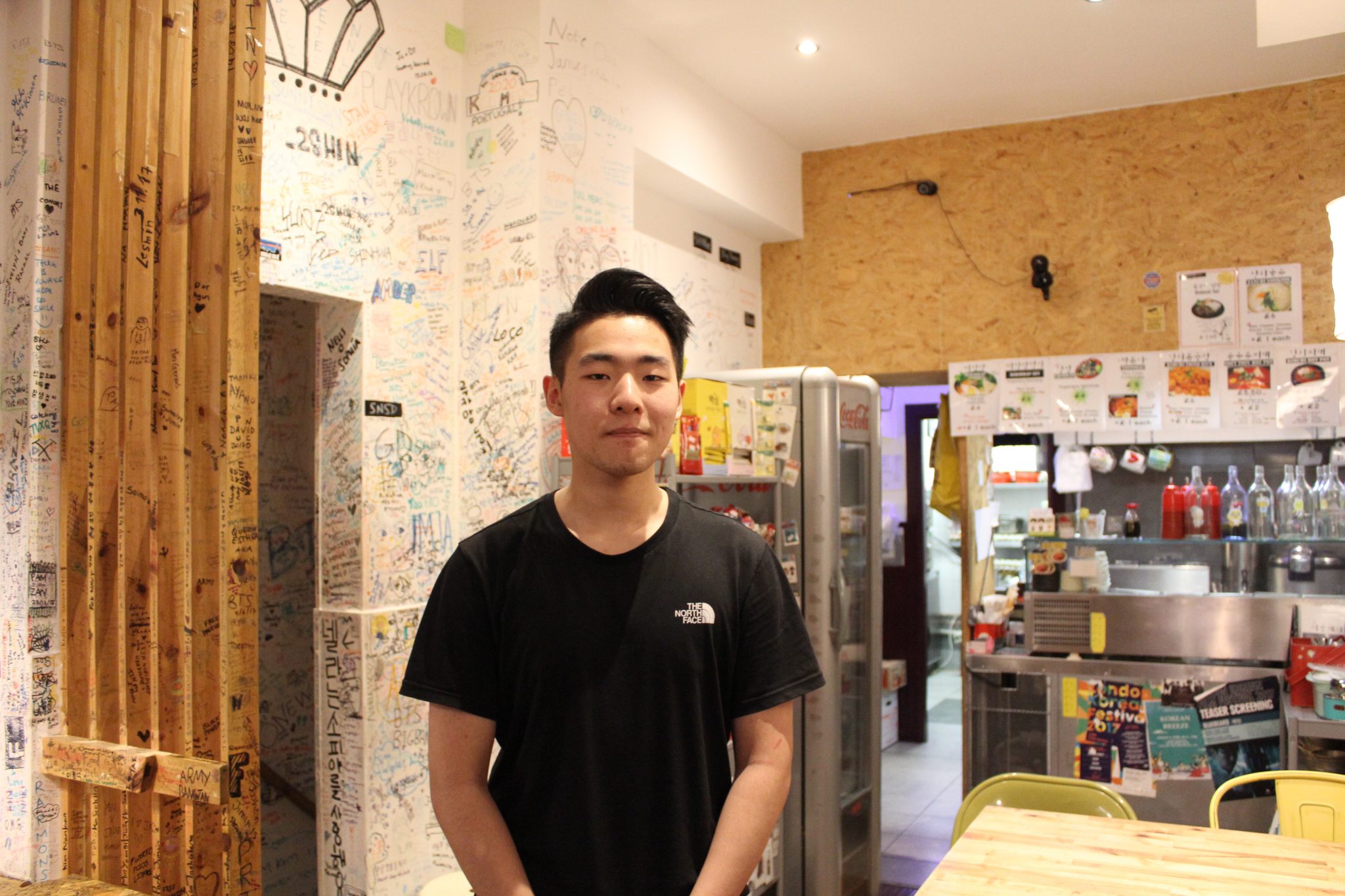 By quarter-to-five, a large queue had already started to form on Great Russell Street as I was talking to Jisu Kim, the manager of Seoul Bakery. He was sitting across from me at one of the tables inside the restaurant as we discussed the words and drawings left behind by past patrons of this little haven not two minute’s walk from Tottenham Court Road. “That’s my father”, says Kim as he points to a menu hanging above the till, “someone drew a picture of him at our previous place so we decided to scan it on to the new menus when we moved here.” The markings which cover the walls are perhaps the first thing you note once you enter Seoul Bakery, but the food is the reason for the queue outside.

Seoul Bakery did indeed begin its life as a bakery in a former residence not far from Denmark Street. Kim’s mother and father, Hoja Son and Hong Hun Kim, began by baking desserts from their home country before realising that London had an appetite for South Korean street-food. The development of cross-rail meant that they had to move locations and with the move they decided to keep the name but change the menu. All of the food is now street-food, served at communal tables. The result is rather like a mix between a canteen, a café, a restaurant and, thanks to the drawings, a slight drizzling of youth hostel. The waiters are mostly students with a few of Jisu Kim’s school friends helping to keep up the numbers.

The markings which cover the walls are perhaps the first thing you note once you enter Seoul Bakery, but the food is the reason for the queue outside.

At five they open for evening service and the first round of customers sit down (a few had enthusiastically tried to enter whilst I was talking to Kim only to be politely shepherded outside for a few more minutes). For those new to the bakery I would suggest starting with the vegetable Bibimbap (£4). “Bibim” translates as “a mix,” “bap” as “rice”. The dish consists of warm white-rice with seasonal vegetables and a fried egg. The trick is to pour in some of the homemade chilli sauce – found in numerous bottles across the tables – and mix it all together. If there are two of you it’s perfect to share but it also works very well as a main. Following the Bibimbap, I would suggest one of the noodle-soups. Toppokki consists of home-made rice cakes, noodles and a boiled egg in a spicy sauce and is wonderful (starting at £5). The Ramyen also comes highly recommended (again, starting at £5).

All of the food is made to-order and, as it is street food, the service is extremely quick. When I went the time between ordering and starting to eat couldn’t have been five minutes. Thanks to this the time queueing outside is unlikely to exceed ten minutes and, honestly, I think the experience of Seoul Bakery easily justifies at least twice that.