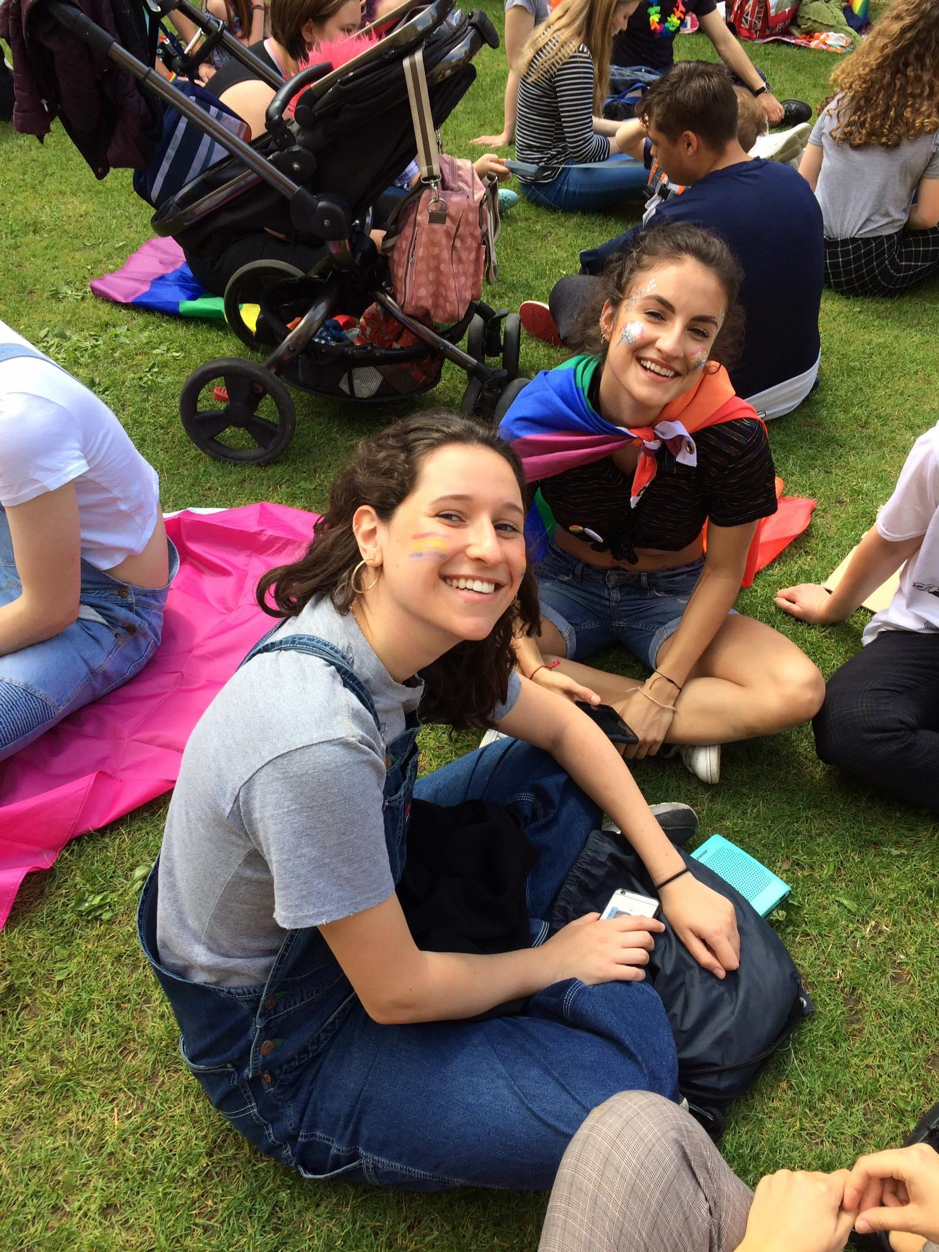 Recently, Pink had a chance to talk to the charismatic and capable Ellie Oppenheim, who is the current president of the LGBTQ+ Society. Love it or hate it, “the Soc”, supposedly the third largest student organisation here, is the core of our community’s social life in Oxford. I invited Oppenheim to reflect on the past, present and future of the Soc and to let us get to know her better.

Tell us a bit about yourself.

Catz, Human Sciences, 3rd year. I changed my name to Ronnie when I was 10, then a year later realised that despite my love for Ronaldinho, everyone else was reading me as a weird child who loved old man names. I watched the L Word for the first time this year; my dad calls me Norbert after the dragon in Harry Potter because I have a bad temper.

What is it like being the president of the Soc?

It’s busy and sometimes stressful! It mostly involves consistent work and organisation, but occasionally if there’s some big blow-up in the media or the university, I ditch the tute work and put a lot of hours into batting The Daily Mail off.

Why did you want to be the president?

By the time I decided to run, I’d been involved in the Soc for a year as Women*’s Officer and wanted to see some changes in the atmosphere of events. When I first arrived, I found it very cliquey and intimidating. I hope we have created a more inclusive and welcoming space this year.

What are some important recent changes in the Soc?

We have seen a significant amount of growth, setting up new events (e.g. a women*’s club night, non-binary events, men’s socials), new welfare spaces (something big coming soon!) and seeing higher turnout than ever before.

I also hope that Soc has taken a more ‘campaign-orientated’ role in Oxford, moving away from being a purely social and welfare society and towards using its outreach and funds to support important causes in the university. While non-identity related campaign issues fall to the LGBTQ+ Campaign [“the Campaign”], e.g. academic freedom of speech, I have consciously got more involved in issues of LGBTQ+phobia, previously considered too “political” for the Soc. Issues pertaining to our identities are basic rights, rather than inherently political. So we have been running events such as our GRA [Gender Recognition Act reform] campaign, getting ready our campaign service, and working closely to support the Campaign. I strongly believe this falls under our remit: if we are not tackling the inequality faced by LGBTQ+ students, we cannot call ourselves a welfare society.

Most universities only have one LGBTQ+ -related student organisation, yet we have two: the Soc and the Campaign. What’s the deal?

Although I think the two offer different services, there is a lot of room for collaboration. This year, the two organisations have had a very good, mutually supportive relationship, with a lot of close communication between our executive committee and their co-chairs. We are even setting up a campaign service together to enable college reps to access support in securing LGBTQ+ specific provisions, such as gender expression funds and gender-neutral bathrooms. Watch this space!

What are the current challenges that the Soc faces?

One thing that the Soc has been consistently slammed for has been our “Zero Tolerance Policy”. I have worked on this throughout my term, working with university staff, Jason Pilsbury, and other students to ensure a transparent and fair policy. We have taken many different opinions into account, and despite a few bumps along the way we have now got our full policy finalised and on our website. This is something we are very proud of, something we hope will stop being a challenge that we face – please take note of our work and clear our name Oxfeud!

Aside from this, the Soc should keep pushing to ensure that we are inclusive to the wide range of students in our community and be careful that it doesn’t just cater to the biggest demographic. Historically, by catering to the majority, the Soc has sometimes allowed inclusivity to fall to the wayside.

Has the Soc improved in terms of including smaller groups within the LGBTQ+ community?

We have had a big push this year to make LGBTQ+ Soc a place that feels welcoming to all students under the LGBTQ+ umbrella, setting up pre-Tuesday drinks events which have seen groups that previously did not come to drinks attend every week. Committee were also given wide-ranging training, like trans and ace/aro 101s to ensure that they were prepped to respond appropriately in difficult identity-related situations. However, we are aware that we still have a long way to go. This is in part an institutional issue, with small numbers of minority students accepted into Oxford, but the Soc must also accept some responsibility and drive harder to create an inclusive atmosphere.

But even if the committee itself improves, ignorance and prejudice within the community can still persist. Intra-community oppression happens. Yet I can’t quite imagine the Soc trying to “educate” its thousands of members. Is this possible or even desired?

I do think that it is within the Soc’s remit to encourage inclusive behaviour amongst the society, and not outside of our responsibility. However, coming up with ways to put this into practice is very hard.

Some things that we have done to help is to host the drag round-table with Haute Mess to discuss their events and to ensure that as many steps as possible were taken by the organisers to prevent prejudice or cultural appropriation within drag. Another way that we have aimed to ensure that we minimise prejudice at our events is the Zero Tolerance Policy. This has a strict set of examples of unacceptable behaviour at drinks, which our RaEM reps wrote. We hope…this will eventually translate into a change in culture and a change in the way our community engage with one another.

Looking at matters more broadly, what are the most urgent issues in our community?

The recent trans report by the Campaign has highlighted one of the most pressing issues in the community. It clearly shows where colleges, departments and the university services are falling short and where student-led welfare is making up for their limitations. The report found that only 17% of trans students felt confident in the University Counselling Service’s capacity to deal with trans students, compared to 54% for the LGBTQ+ Society, about which only 10% of 52 respondents provided negative feedback. The findings of this report indicate that disproportionate responsibility falls on students to offer support to their peers. Instead of criticising the student-led welfare, which is consistently outperforming trained professionals (thank you Leo & Cody, our trans reps!), we should be calling on the university to stop sweeping these issues under the rug, to take the complaints of trans students seriously, and to improve its services.

Glitterball. It’s happening soon. Why does it matter?

For our community, assimilation can be difficult. Whether we’re ignoring odd looks when venturing to a “straight” club with a same-sex partner, gritting teeth through misgendering by a tutor, or frantically untagging ourselves from Plush pictures to avoid uncomfortable questions at the next family gathering, existing in non-LGBTQ+ spaces can be exhausting. This is especially true when it comes to navigating Oxford’s hyper-traditional elements, particularly the ball scene. Glitterball gives us the opportunity to take part in a fundamental part of Oxford University life, without the discomfort and dysphoria that often comes with regular balls. We can do away with the strict, gendered dress codes and foreground LGBTQ+ dancers, drag acts, and DJs.

Sounds fabulous. Could you describe the queer scene in Oxford in a few words?

Pretty bloody banging, compared to other university towns! We believe we have the biggest university LGBTQ+ Society in the UK, too.

So many questions, so little space! A final query: who is your favourite queer icon?

I would say it’s Julia Serano, my favourite gender theorist, who writes about the exclusion of trans women from LGBTQ+ and feminist spaces. I tend to agree with nearly everything she says. Here’s one of her quotes: “How about this: let’s stop pretending that we have all the answers because when it comes to gender, none of us is fucking omniscient.”