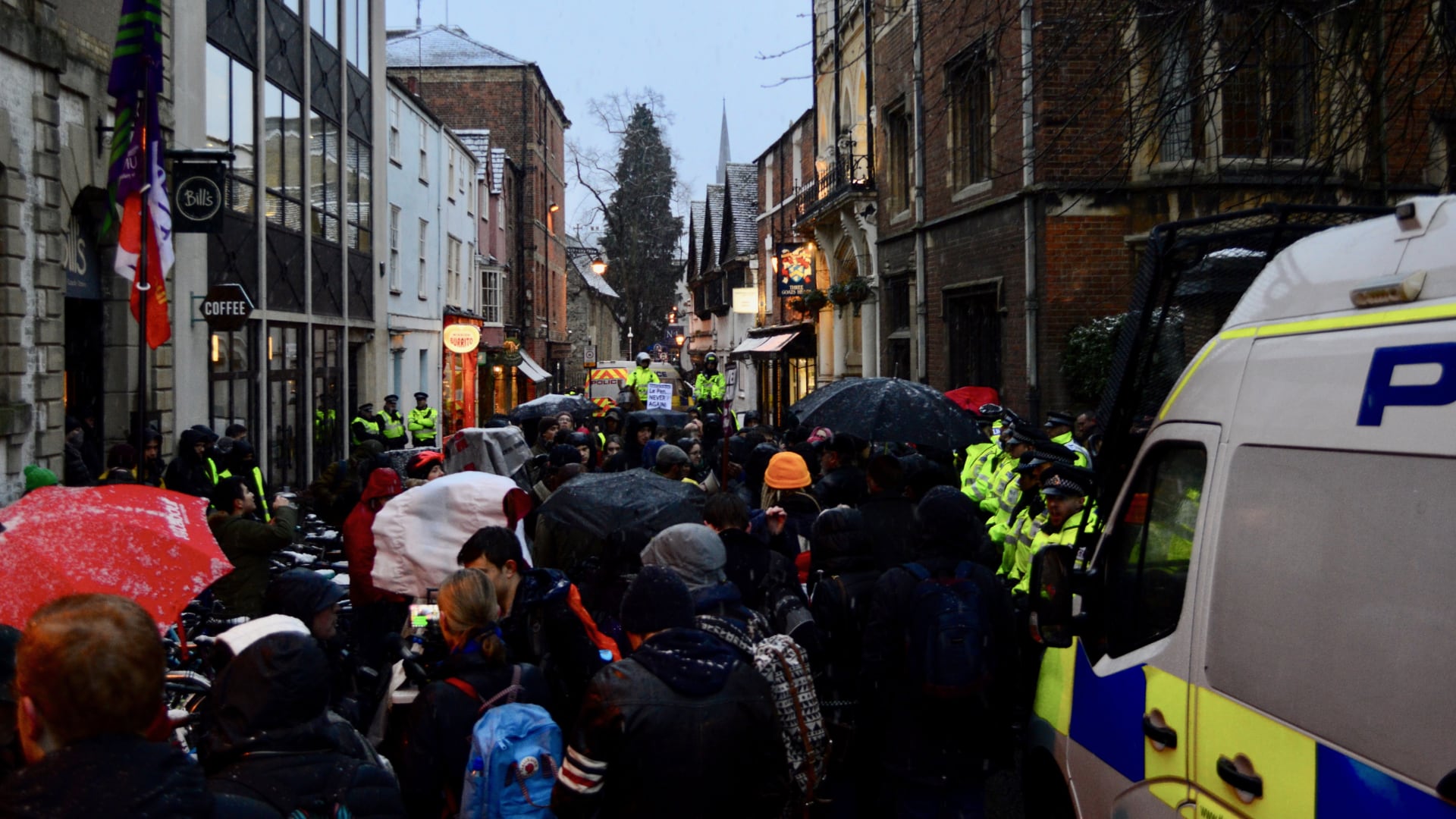 At the protest against Marion Maréchal-Le Pen’s Oxford Union talk last Tuesday, protestors shouted anti-police slogans at rather impassive lines of officers (and four very well groomed horses) while members of the campaign group Stand Up to Racism distributed placards with anti-Le Pen sentiments. These well-designed and always-plentiful placards can be seen hovering over the crowds at any given left wing demo, from tuition fees to airstrikes in Syria. An older man hawked copies of The Socialist Worker without much apparent success. So far, so normal for a left-wing protest: cold extremities, ethical footwear, 19 year olds from Hertfordshire who’ve read too much Gramsci.

However, the scene – and the literature on display – merits further examination.

Stand Up to Racism bills itself as a coalition of left-wing groups and activists united in targeting racism, Islamophobia, Antisemitism and fascism.  It began life in the early 2000s as Unite Against Fascism (UAF); while placards bearing this name were also circulated at the Marechal protest, the group now largely operates as Stand Up to Racism. It is open about the participation of the Socialist Workers’ Party (SWP) in its activities; much like at the Union protest, the two are frequently seen together, although the relationship between the two groups is rarely detailed.

Dismissive of feminism and unsafe for women, the contemporary SWP is a poisonous organisation, and they know it…

Arguably the key player on the British far-left in the late 1980s and 1990s, the SWP had its annus mirablis in 2003, playing a central role in the Stop the War Coalition and the movement against the Iraq war. Ebbing in the late 2000s, the party collapsed dramatically following a series of sexual assault scandals between 2010 and 2013, a saga best outlined in Edward Platt’s 2014 New Statesman article “Comrades at War”. The scandal focussed around the case of  “Comrade Delta”, a member of the SWP’s central committee who was accused of raping a woman known as Comrade W. Kangaroo courts, opaque internal hearings, and further allegations followed. Given the SWP’s anti-police stance and distrust of “bourgeois justice”, no authorities beyond the party’s own were involved. Comrade Delta remained within the party’s leadership; a vast swathe of the membership resigned in disgust, leaving a rump of hardcore supporters who deny that there had been any wrongdoing.

Dismissive of feminism and unsafe for women, the contemporary SWP is a poisonous organisation, and they know it. As such, the party conducts many of its activities under the auspices of Stand Up to Racism, in what has been referred to as an attempt to “launder” their reputation. This attempt often sees Stand Up To Racism targeting young activists, unaware of the Comrade Delta scandal, in schools and universities. Black Lives Matter UK, Sisters Uncut, , Owen Jones, Novara Media’s Ash Sarkar and Aaron Bastani, and Why I’m No Longer Talking to White People About Race author Reni Eddo-Lodge are just a few of the left-wing individuals and organisations who have condemned Stand Up to Racism as a front for the Socialist Workers’ Party.

The SWP told the BBC in 2016 that “Stand Up to Racism is not a front organisation for the SWP”; well, they would say that, wouldn’t they.

At Tuesday’s protest, along with anti-fascist slogans, protesters from Stand Up to Racism (and some who were likely entirely unaware of the group’s background when offered an anti-Le Pen placard) chanted a litany of anti-police lines, from the standard “Fuck the police” to “Who protects the Nazis? The police protect the Nazis” to “get those animals off those horses”. There is nothing illegitimate about protesting and criticising the police: the merits of a group who hid the perpetrators of serious sexual assault from criminal prosecution (or legitimised those that did) doing so, however, are suspect to say the least.

Marion Maréchal-Le Pen and her beliefs are, to those of us on the left, unconscionable.  However, if our protests are to have legitimacy, groups like the SWP and those who give them succour should be considered equally so. There is a moral imperative to resist fascism; that does not mean it is acceptable to do so side by side with organisations that have consistently belittled, dismissed and endangered women.  These people are no comrades of ours.