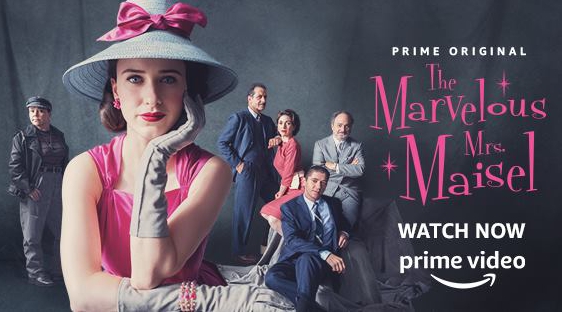 After completing its first season I forced everyone I knew to dedicate a day to binging Amazon Prime’s newly-released ​The Marvellous Mrs. Maisel, a comedy that follows Miriam “Midge” Maisel as she pursues a career in stand-up comedy post-divorce.  Set in 1958 New York City, the show has all the trappings of perfect nostalgic television. Not only does eccentric creator Amy Sherman-Palladino transport viewers into a colourful, charming rendition of the past, but she also managed to create a storyline and a showrunner who belongs in 2018 as much as she does in 1958.

The show could not have been released at a more perfect moment.  Hot on the heels of the #MeToo Movement, season 1 dropped in November 2017.  Its timing seems in part responsible for its widespread success; centring solely on a woman’s ascent, ​The Marvellous Mrs. Maisel provides viewers with a character whose quest to find her voice echoes the political work of women who, through efforts like the Women’s March, #MeToo and Time’s Up, are uniting in power to push for cultural and legislative change.

The happiness and hope teeming in “The Marvellous Mrs. Maisel” is exactly what propelled me to share my love of the show with everyone I know.

Whilst Miriam Maisel’s foray into comedy parallels the political awakening of many modern women, it also offers a hopeful, inspiring escape from the often exhausting realities of today.  The show may not recreate the most authentic picture of 1958, but the liberties its designers and writers take give the show its pizzazz.  When the spotlight hits Miriam as she begins her first performance, she stands against a mosaic of fliers, an image that gives a bright charm to a club so often described as drab and dingy.  The costumes, too, are magnificent and indulgent, each with matching heels and hat.  Every piece of season 1, from production to plot, seems essential to the successful portrayal of Midge as she evolves from Mrs. Maisel, clever housewife, to Mrs. Maisel, the unabashed comedian.  The show seems to tell its viewers that, if Midge Maisel can make it as a female comic in the 1950s, surely today’s women can survive their own obstacles–– and maybe they can even stir up some trouble themselves.

The happiness and hope teeming in “The Marvellous Mrs. Maisel” is exactly what propelled me to share my love of the show with everyone I know.  So, when season 2 debuted on December 5, I couldn’t wait to dive in.  Much remained the same.  Playing the part of Midge Maisel, Rachel Brosnahan continued to deliver her character’s quick wit and comedy routines with poise and humour.  The acting, on the whole, is wonderful.  Marin Hinkle and Tony Shalhoub play Midge’s parents, Rose and Abe, and their antics and freakouts promise laughter each time they enter the screen.  Alex Borstein also shines the role of Susie, Midge’s dedicated manager, with grit. Susie’s vulgarity and her butch vibe are welcome counterparts to the always-perfect and sometimes Pollyanna Midge.

But, when looked at as a whole, it seems that season 2 abandoned much of the poignant cultural commentary that made me adore Season 1 in exchange for a still-entertaining, still artistically striking, less potent piece of fluff.  Trips to Paris and the Catskills give the opportunity for visually stunning scenery and fun costumes, but impromptu dances along the Seine and sunbaths in pastel bikinis added little significance to women’s power and value, which seemed to be season 1’s thematic focus.  One welcome development from the Paris storyline was the unwinding of tense, panicky Rose, but even that doesn’t stick.  Similarly, the Catskills introduce Midge to a charming new man who, in a twist, encourages her career as a comic.  But, in the end, it’s questionable if we really need him.  In short, the hiatuses from New York City read like victory laps to flex the show’s success instead of necessary plot mechanisms.

Yet season 2, unfortunately, seems to confine women’s empowerment to Midge’s storyline and, even more limiting, to her ​act alone.

Keeping true to season 1, Midge’s sets do pack a funny and feminist punch; she continues to discuss topics like pregnancy and sexist treatment that land her in hot water among bookers.  Yet season 2, unfortunately, seems to confine women’s empowerment to Midge’s storyline and, even more limiting, to her ​act alone. It’s as if Midge is the ​only one allowed a life outside the role of a picturesque housewife.  On two separate occasions, groups of young women express their ambitions to become professors and performers.  Both times they are shot down.  When Rose points out that Columbia’s art faculty is comprised only of men, instead of encouraging the women to pursue their goals –– advice consistent with the arc of season 1 –– she urges them to transfer to the business school, where they’ll meet eligible bachelors and embrace their future as housewives on the Upper West Side.  Even more disappointing, Susie squelches the hopes of young women who dream of becoming singers, actresses, and poets –– young women who aren’t much different than her own client.

Season 2 reeks of intense desire to create conflict in what Midge herself calls her “perfect” life. A mother run-away to Paris, a lingering love for her ex-husband, and a new relationship that makes Midge question her career all hinder building up the marvelousness of Mrs. Maisel. Lenny Bruce, a reimagining of the real-life comic, questions Midge: “Do you think you can go back to making jello molds?”  Midge gives a non-answer, but by even providing that future as an option, the writers betray what I identified as their original purpose: to chronicle a woman’s ascent when everyone and everything around her tell her it’s impossible.  I’m still going to recommend ​The Marvelous Mrs. Maisel to my friends, but I’ll include the disclaimer that it has strayed from its political bite and joined television’s genre of fun fluff.