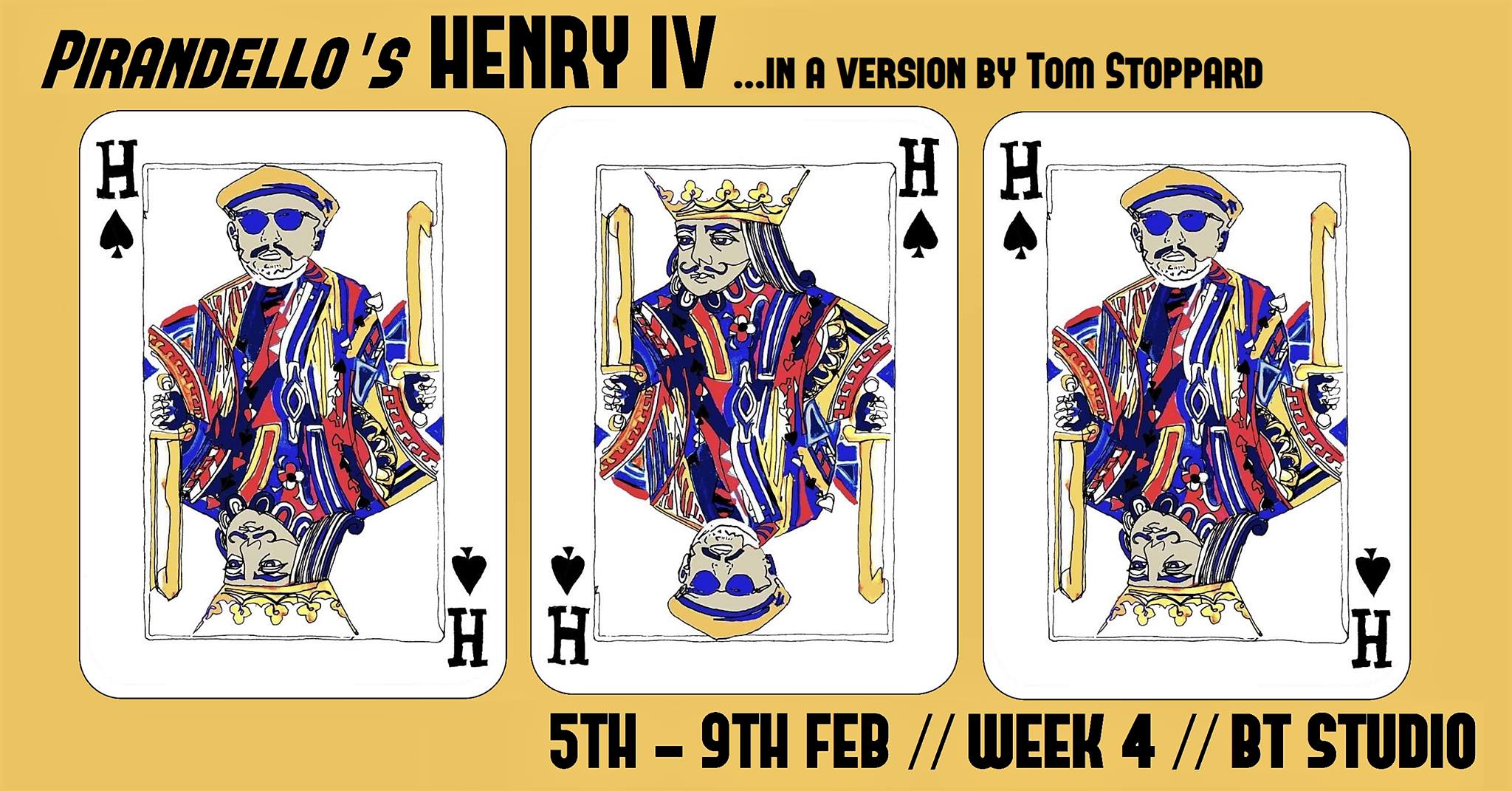 ‘I think it will be really memorable’ says Kathryn Cussons (Henry) ‘it’s the kind of play you’ll see and won’t forget, and that’s quite exciting. There are a lot of shows that you can go to that are enjoyable for that evening but they don’t make that much of a lasting impact. But in the fact that this play is so self-reflective, so interested in why it matters to act or to watch someone pretend to be someone else, the leap of faith of belief in anything theatrical, I think it’s going to be the kind of play that will linger in your mind and keep popping up again in the future things you see.’

Bringing together a cast and crew of both established, experienced actors to people relatively new to theatre at Oxford under the direction of Dominic Weatherby (himself a first-time director) Pirandello’s Henry IV (originally Enrico IV in Italian, but ‘we didn’t want to be too pretentious about it’ they say) promises to be an hour and a half of comedic wit combined with introspective reflections on the nature of the dramatic. Described by director Dom, the play concerns ‘an Umbrian nobleman who is riding on his horse during large aristocratic pageant, and he falls off his horse dressed as Henry IV, sustaining a head injury. On his return to the house it becomes clear that he’s not acting anymore and he genuinely believes himself to be the character Henry. He becomes violent and the only thing the household can do to pacify him properly is to reconstruct the world of Henry IV’s court in his house. So there’s a costume department, actors are hired to come in and play different roles, and for twenty years this whole farce continues until Henry’s sister, who’s been bankrolling the whole thing, dies and the family rock up with a psychiatrist in tow. It’s a bit of a tragedy, a bit of a dark comedy, which documents the conflict between the family trying to convince him he’s not Henry IV, and Henry trying to convince them that the insanity might be a preferable option.’

The play is wonderfully nimble and light-footed as well as funny. It carries its intellectual weight very lightly, which helps us a lot.

Pirandello wrote the play in the 1920s, and Tom Stoppard’s adaptation of the original, literal English translation was done in 2004. Is it difficult navigating a relationship with both Stoppard and Pirandello as authors? Does it pose a challenge not having Italian as a language?

I’ve been working mainly with Stoppard’s text and just treating that as the text we’re using. I have looked at the original because it provides more contextual information which I think is quite important about what Pirandello’s thinking about in writing the play. But it’s very much Stoppard’s text that we’re using, and his translation very much sounds like a Stoppard play, verbally and stylistically. I think Stoppard’s language breathes a new energy and lightness to the play, particularly in its comedy it’s very colloquial. But Pirandello is working in a very specific context at a point in the 20th century when people were fascinated with the middle ages. Large aristocratic pageants were common and people enjoyed dressing up. It’s been important to consider that context when thinking about characters and the world they’re living in but Stoppard makes that world so much more immediate and enjoyable to live in because the way he writes is so wonderful. So I think Stoppard is very much drawing on the similar drives to Pirandello. I don’t think he’s bringing in an entirely new way of reading the material he’s just bringing Pirandello up to the modern day.

What are some of the joys and challenges of playing such an elusive, multi-faceted character as Henry? (Kathryn)

He’s a really exciting character, and quite different from the kind of parts I’ve previously been cast in, even most basically in that I usually play female parts. It’s a challenge to inhabit someone who thinks of himself as so powerful and literally has the entire house of people doing whatever he wants whenever he wants. He’s very far away from who I am naturally as a person, but that’s very exciting as well. I think the best thing about him is the way his mind works; his speech and thoughts are very creative and also incredibly complex. Every time we read the lines we realise that he could mean so many things and he probably does mean multiple things, which is really interesting as an actor but also very challenging.

Does this multiplicity of meaning make it a difficult play to direct with a clear vision? (Dominic)

I think every time we approach the play I have new ideas about it or reconsider something about it, which is fascinating to work with over a period of time but of course in performance you only have one sitting to get that through. So I’ve tried to make it as light on its feet as possible. The play is wonderfully nimble and light-footed as well as funny. It carries its intellectual weight very lightly, which helps us a lot. So it will be about trying to emphasise its comedic elements, its characterisations and hopefully it should be very engaging! There are other challenges too, aside from my own lack of experience! It’s a period play and with budget constraints we have to be quite thrifty with everything which has been fun but difficult. Equally, the play originally has quite a large cast which we’ve had to cut down, creating some multi-role parts. I’ve also decided to stage it in the round, which with a cast of eight people in a space as small as the Burton Taylor Studio means side-lines are a continual problem.

Could you tell me a bit more about your ideas about the play translate into the visuals of the stage?

Conventionally this play has been staged with an air to looking at very large, pristine, courtly spaces that have been subtly medievalised (if that’s a word!) with a kind of Victorian idea of what the Middle Ages might look like. What we’re doing which is a bit different is we’re staging the whole thing on a tiny little set, which has much more the atmosphere of a shed than someone’s drawing room, and I think it will hopefully be quite an immersive and sensual confrontation with what the Middle Ages were. It’s going to be very dimly lit, we’re predominantly using spotlights so onstage lighting will have a big effect. There’s going to be straw all over the place which is going to make it quite dusty and stuffy and it’s going to have lots of chalices and candles and a lute scattered around the place. It’s going to feel much more like you’d imagine a mead-hall or the palace of an eleventh century German king, which is not anything like the idea we have of the high Middle Ages. It’s a brutal, barbarous world in which power and wealth are the primary forces because of patronage networks et cetera, so we’ve tried to integrate that into the set design as much as possible and make it really feel like a transportation into a very different frame of existence from the modern world, and that will be really emphasised by the fact that we have these very incongruous modern figures walking around the stage as well.

Do you have any favourite scenes?

Because it’s such a large cast, there are definite sub-groups within the narrative. There’s one group of the courtiers (actors hired to tend on Henry) and there are little scenes with them that are very funny, particularly at the beginning of the play. But for me I think the best bit is when they’re about to go in to see Henry, and everyone who’s been on the stage so far has been in modern dress, and these actors come on and bring out all these period costumes, everyone quickly tucks their shirts in very nervously as the whole play hasn’t really revealed who Henry is yet. There’s all this anticipation built up around him and suddenly he enters, and it’s an explosive moment that really puts you in a place of not being sure whether you can laugh or not or what we’re supposed to make of Henry as a character, and I think the way that’s built up in the script works really well.

What made you decide to pitch and put on this particular play?

I’ve been thinking for a long time about how we relate to people of the past, how we can inhabit that mindset. My grandfather who I never met left behind a box of diaries and letters that I used to read quite a lot as a kid, and that was kind of a way in for me for reconstructing him, if you like, and how you get in the mindset of someone you never knew. I wanted to do something that explored the theatrics of power, and I came across this play in a footnote for another text I was reading and it sounded like it fitted the bill so I read it on the bus! It’s a fascinating text and I think it’s so unusual to achieve an hour of deep, introspective thinking about what theatre actually is, which is quite daring in many ways, and what makes it so intriguing and will be quite an unconventional thing to witness on stage.