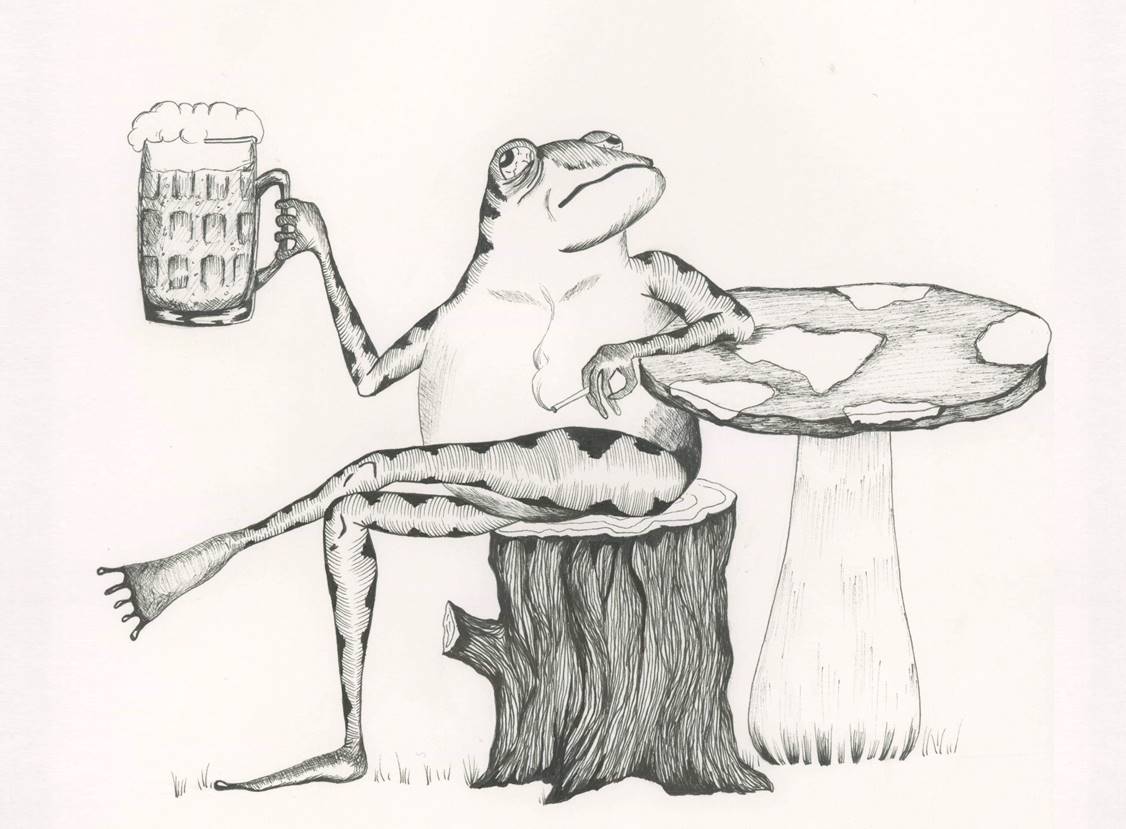 Frog’s Legs, by Hughie Shepherd-Cross, is not a play for everyone. Jokes about paying Egyptian slaves in cocaine while they build a pyramid for your wealthy, dead, French heiress wife are not for everyone. Nevertheless, this four-man play manages to walk a thin line between offensive and funny, resulting in an absurd but oddly endearing comedy.

The play follows two local blokes, Martin and Duncan, who are outraged to discover that their local pub has been turned into a pub-themed-cafe. Assuming that the new proprietor, Franc (with a ‘c’!) is French, the two friends embark on a series of poorly-thought out plots designed to ruin his life, which inevitably backfire. Spoiler alert: by the end of the play Martin is dead, Duncan is homeless and broke, and Franc spends the rest of his days living in luxury at the Ritz.

Martin (Sam Scruton) and Duncan (Rory Wilson) perfectly play the incompetent duo, balancing each other out. Duncan is slightly more in charge, cracking jokes that Martin, more often than not, fails to pick up upon. He also has a surprisingly literate streak, quoting Oscar Wilde and unpacking the English idiom now and again. Martin, with glassy-eyed simpleness and naive optimism, is almost impossible to hate despite his desire to ruin poor Franc’s life.

If there is a central message to be found within Martin and Duncan’s half-baked plots, it would probably be ‘don’t give all your life savings to a cafe-owner and then borrow money from a loan shark’.

Similarly Franc (Nathan Brown) moves through some very drastic ups and downs with a certain ‘take life as it comes’ gullibility, finding fortune in his wife’s premature death and obtaining national fame on a cooking show because of his life’s sob story. One of the play’s stranger, but better, gimmicks is Franc’s keyboard guitar, which he pulls out intermittently to sing about the turns his life has taken. This is Frogs Leg’s humor at in a nutshell: Franc, dead wife at his feet, sorrowfully and earnestly singing about her inheritance.

Unfortunately, the plot starts to feel a bit circular by the third time Martin says “I want to ruin his life all over again!” Character development isn’t really the point here — if there is a central message to be found within Martin and Duncan’s half-baked plots, it would probably be ‘don’t give all your life savings to a cafe-owner and then borrow money from a loan shark’.

Plot aside, Frog’s Legs is all about the jokes, and jokes it certainly has. Some, of course, don’t always land. Some are a bit too gratuitous for comfort (Franc rubbing is face into piles of icing-sugar cocaine springs to mind). However, the cast delivers their running bits with impressive timing, and often the play’s most off-hand comments are the funniest. Nor is there any shortage of visual humor. At one point, a cardboard sign stuck onto a part of the set with blu-tack started to slip down, with such comic slowness that it could have been a deliberate part of the scene.

I’ll say it again, Frog’s Legs is certainly not for everyone. But striking a balance between irreverent dark humor and lighthearted cleverness is a difficult thing to do. Barring a few oversteps, I think Frog’s Legs succeeds.