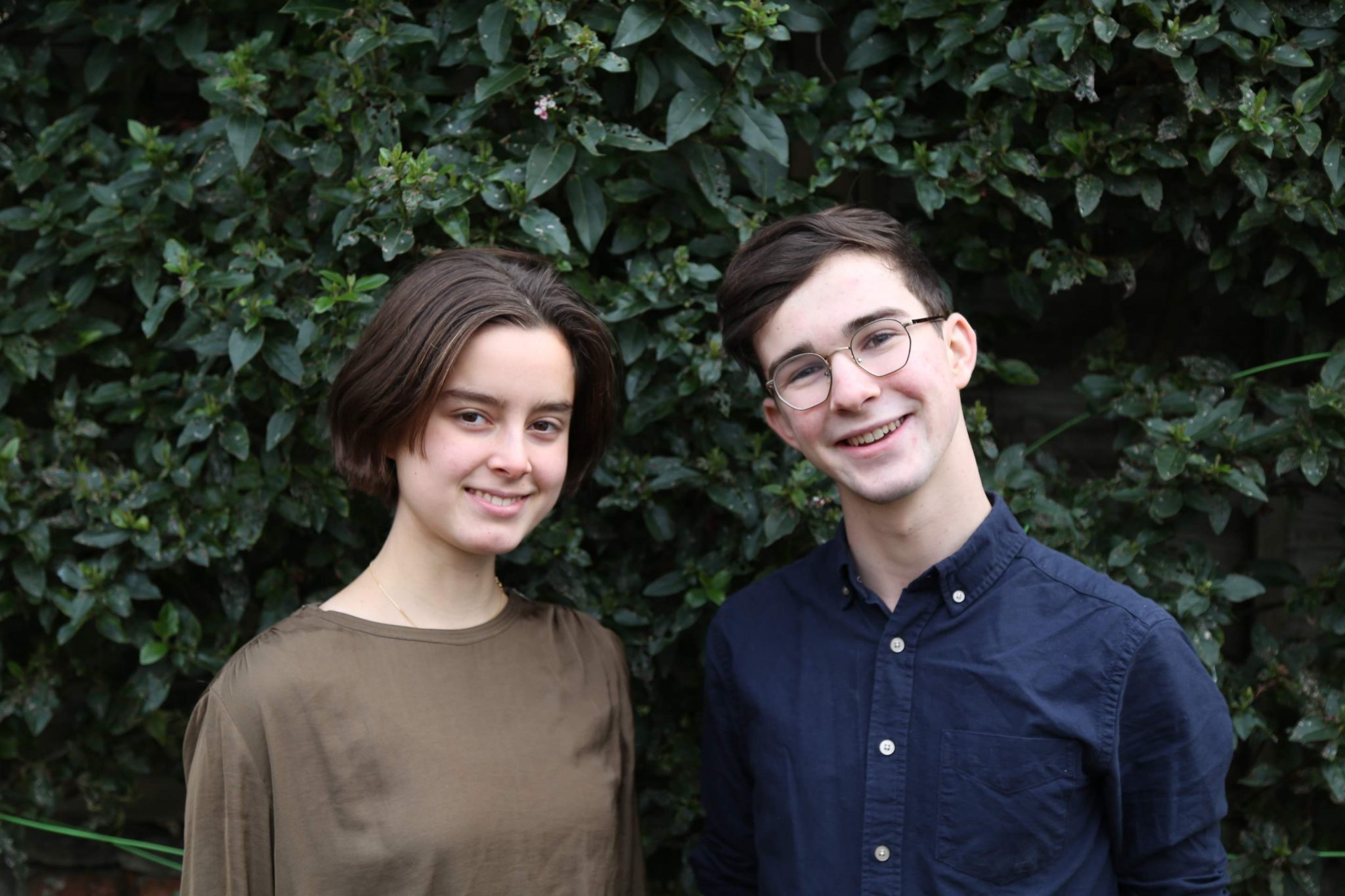 Simon Upton and Marceline Bresson are 2nd year undergraduates at Teddy Hall, studying PPE and E&M respectively. They have recently set up their own University Society, Oxford European Forum, as a space to discuss Europe holistically rather than in the context of any political agenda – and they are now recruiting for members. I met with them to hear more about their plans for the project.

What is Oxford European Forum?

The purpose of this is to be constructive. Many associations involve people with similar images for the future, the ideal world. What we want to do is take it a step back: we have all these different futures – which one are we going to chose from, and why are we going to chose that one? It is to bring people together, to help them shape their ideas about Europe.

The “Forum” part is to deliberate. It is to talk. It is to bring together Liberals, and Conservatives, and Marxists, or whoever else, and to take these people in a relaxed setting to constructively think and to consider the facts, and consider the ideals of a European identity.

So the plan is to de-construct ideas about Europe, to reconstruct it – with a focus on European culture to refresh our perspective. What sort of things have you got in mind?

Marceline A lot of other Oxford societies have one person speak, another person listens; questions are asked. It’s very passive. It’s very consuming. We’re only consuming information. The Oxford Union for instance has quite a division between the audience and speaker; we want to take those walls away. So we are going to take the speaker approach, and the seminar approach. During the seminars we want to assemble a smaller group of people, so that everyone has a chance to say something and engage with someone who knows a lot about the specific topic – to crystalize your own opinions.

Then we have the speaker events, which are intended to reach a broader audience, to draw people in to what OEF is actually about. In terms of the cultural, we will have seminars about the European identity. What is the European identity, what ae the cultural parts of it, is there such a thing, do we want there to be such a thing? I think identity is something that has an intention to it. And then we can also think about the identities in Europe, and also nationalities in Eastern Europe. We can look at all the typical things in culture, music and art.

Simon I really love music, so  was keen to get a musical perspective on it which some people might perceive as odd – but we’re currently keen on an event that questions whether there has been the development of a European identity through music. Beethoven’s ‘Ode to Joy’ is the European Anthem, which I find really interesting: if you consider for instance the Viennese coffee houses of the nineteenth century, they were such a melting pot of European nationalities. We have Lenin there, and all these Austrians, and Germans, and French. Culturally speaking, a lot of artists were moving all around Europe, and I want to explore whether they did see national boundaries.

“To what extent can you claim that ‘Ulysses’ is about British philosophies over European?”

Marceline The artefacts that we cherish on a national level but also a European level – for example, ‘Ulysses’, which by many is heralded as one of the biggest pieces of English literature – it’s full of Italian, it’s full of French, it’s full of Latin, it’s full of Greek. To what extent can you claim that ‘Ulysses’ is about British philosophies over European? We want to draw into that conversation.

On a practical level, what have you done so far in setting up this society, and what are your immediate plans?

Simon It’s definitely been a steep learning curve, trying to set up a University society from scratch! There is a fair amount of bureaucracy. It’s been really useful actually because it’s allowed us to reach out to the European Studies Centre, which is based in St. Anthony’s, and we’re going to have a meeting tomorrow morning with the director of the Centre who’s going to be our Senior Member. I think we’d have done it without the red tape – but the red tape has also allowed us to facilitate a partnership with the European Studies Centre which we think will be really, really beneficial.

Marceline One of the main reasons to register as an Oxford University Society is that it allows you to get funding from the University – and one of the things we are struggling with is funding.

What’s the funding for?

Marceline Mostly at this point it will be to compensate speakers. We will probably have to fly in people – one of the people we’re getting is Jeroen Dijsselbloem, who s the former President of the Eurogroup. Eventually we will probably get some more costs.

Simon It’s a bit of a chicken and egg situation. At the moment we’re basically relying on peoples’ goodwill, and enthusiasm for the idea, and their being willing to give their time for it which is incredibly generous. But if we don’t have the funds it’s hard to get the International speakers in who have the experience to build the reputation, and if you don’t have the reputation then it’s hard to get the funding.

If people read this and are interested, what can they do to get involved?

Marceline Ok, so we have an online forum – reach out to us on our Facebook page to register an interest. We’re looking for three kinds of people; we’re looking for people who just want to come along, who are interested in our events, we’re looking for committee members – at the moment there’s just us! – and speakers who are willing to lead discussions.

What is the dream? What do you hope to accomplish with OEF?

Simon The main thing that anyone wants when they’re setting something up is for it to carry on without them running it – to have people so enthusiastic that they’re willing to take up the mantel and keep going. Ultimately – I mean we’ve thought about having exchanges across Europe, with other countries to see hat they think about Europe. We’ve thought – “thought”, in a fanciful way – about doing a student conference where we have students from different universities, a bit like Oxford Forum of International Development.

Marceline It started with enthusiasm. We consider ourselves as European – what do we mean by that? This discussion was pretty much stranded in no-man’s-land, throwing mud at each other and ignoring each other’s points. I think that’s a broader tendency within societies – no longer listening to each other. So also trying to get change in two, or three, or four peoples’ minds’ – that would be very rewarding. You never know what those people will do, you never know what they will be. The thing you have to remember when you do a good deed is hat you plant a seed. You will never be there to see what will grow, to see the flower, but you have to trust that there will be a flower.

Simon, I know you’re born and bred in Croydon – but you consider yourself European? And Marceline – you’re Dutch. On a personal level how do you think your backgrounds have shaped how you see Europe?

Marceline I’ve lived in the Netherlands for my whole life, but was always quite interested in languages. So I did French, I did Spanish, I did Italian, I got an Italian boyfriend. When I was sixteen I had this period when I went back and forth from Rome. My youth I spent in the Netherlands, but as soon as I started to travel around myself, when I was sixteen – that’s when I started to feel the connection. I could actually communicate with people with interesting things to tell – people who’ve lived in Paris, or in London, or in Greece, or Poland. I think for me languages, being able to travel at least the Western part of the continent and understand people without having to go out of my way, it feels very nice.

“We have the same shared cultural history. In a less romantic way, the shared atrocities”

Simon I think Marceline’s story is kind of the quintessential, continental European perspective, and I think there is this tendency in the UK – I see it myself when I go to other countries – to see Europeans as a kind of “them”, you know? I think there’s also something about being an island, the island mentality. That’s kind o led to this idea that saying you see yourself as European is fairly pretentious, fairly middle class. But I don’t think that has to be the way, and I don’t think that should be the way.

We have this same shared cultural history. In a less romantic way, the shared atrocities, the same trauma. While we may in this past decade have decided we’re going to step out of this political association, in the grand scheme of hundreds of years identity, it doesn’t really change who we are, and what our relationship is to Europe. It seems counter-intuitive to start the Oxford European Forum in the UK a day before Brexit happens – but I think that it does start then, because again, it ties into the bigger idea that we’re leaving the EU, but we’re not leaving Europe.

Marceline I would like to frame this though as one way we can be of benefit to people, when I say that as an organisation we do not take any political stances. We are no in favour or against Brexit, we are not in favour or against the European Union. We are simply there to help people to think about those questions through dialogue.

Contact Marceline or Simon about getting involved in Oxford European Forum on Facebook, or email them at:

Jeroen Dijsselbloem will be speaking with OEF, subject to sufficient interest