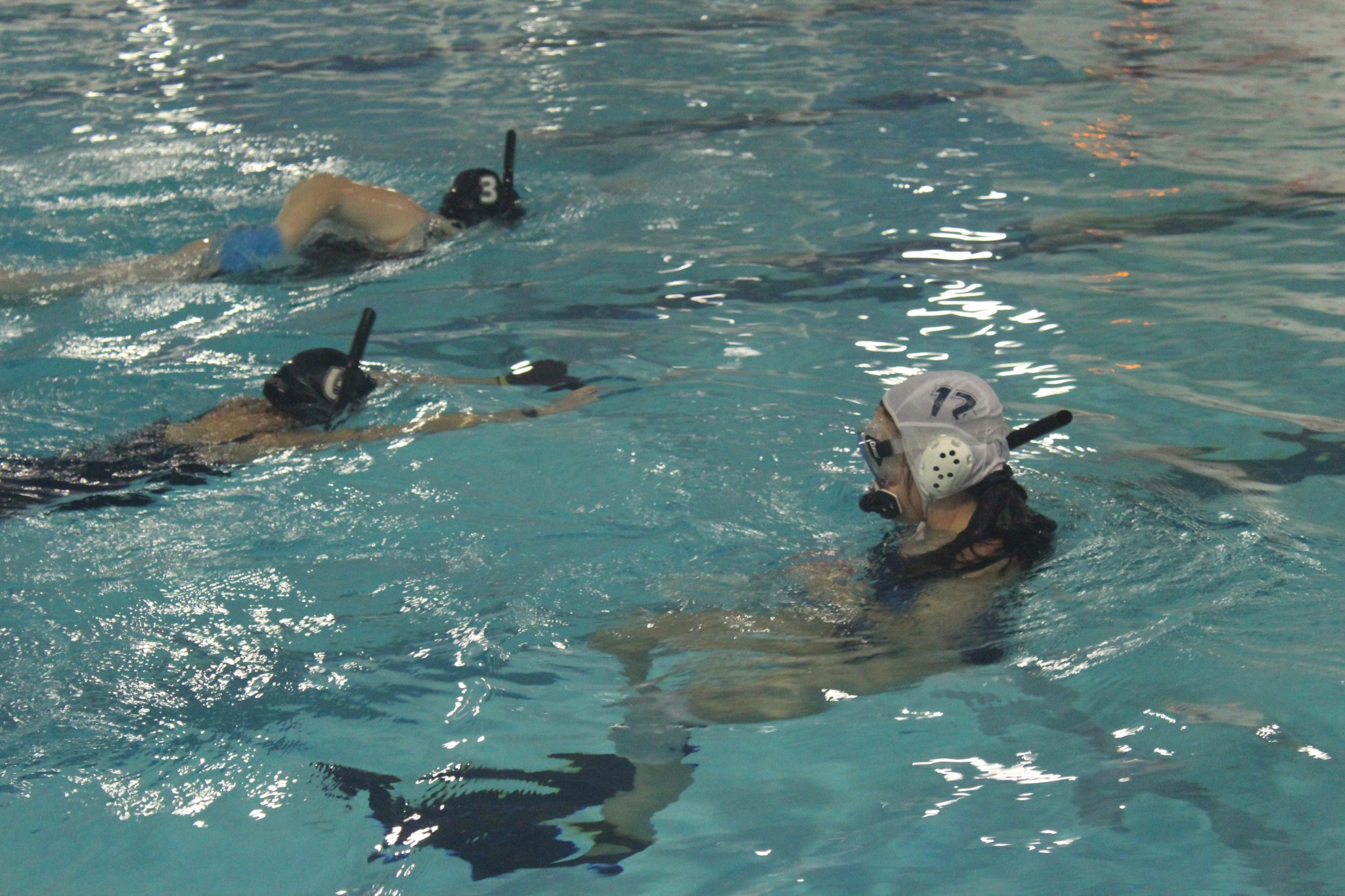 Octopush was a bit of mystery to me since I’ve never seen a game before, and the idea of “underwater hockey” intrigued me. The metaphor is a bit ill-fitting as Octopush is a different type of sport altogether. Teams were originally comprised of eight players in the water at once, hence the octo-, but the rules have changed to regulate it down to six.  Teams wear goggles, snorkels, and fins to maneuver under the water with their one handed hockey sticks, which is about the same size as one of those Carrom Nok-Hockey game boards. There are no goalies, as well as no need for padding since the puck slides along the bottom of the pool.

Talking with Octopush President Calum Dee and Team Captain James Kohout, they give a better picture to what goes on under the water. From an outsider’s perspective, the sport seems like it would get rather disorienting as players have to resurface continually, while the players underwater lose more breath every second. Additionally, there is plenty of spinning through the water, maneuvering the puck, and absolutely no way to communicate with teammates apart from perhaps hitting the floor.

“It’s the uniqueness, the way the game goes…”

Kohout added: “And then knowing where you are and stuff that comes with time. You’ve got to learn to time when you go down and stuff, and that just takes a bit of experience.”

The team plays three tournaments throughout the three terms, the two largest being Student Nationals and Cuppers. Unfortunately since Cambridge has yet to form an Octopush club, there is no opportunity for a Varsity match.  The date of the Cuppers tournament has yet to be finalized but the team is hoping to set it in early May during Trinity. The games are played for about 10-15 minutes, which would seem like a short amount of time, but the physical demands of the sport factors in.

“It tends to be rolling so you don’t have to sub out people like in football,” said Kohout,  “At any point, if I’m feeling tired and I’m going to get out, someone else will come in. That will be a big part of the game actually in competitions as well because of the difference between someone who’s been sitting there for one minute kind of breathing normally as opposed to you going up and down holding your breath.”

The sport was founded in the early 1950s by some English sub-aqua divers who wanted more activity in swimming besides going back and forth. The appeal seems to hold true almost sixty years later, since both the club president and captain found their interest in Octopush from an base interest in swimming. Dee use to swim competitively until he was recommended to the sport when he expressed his waning interest in swimming.

Kohout said: “It’s the uniqueness, the way the game goes… it’s nice because it’s quite small and everyone is very friendly, so you just always know you’ll have a good time.”