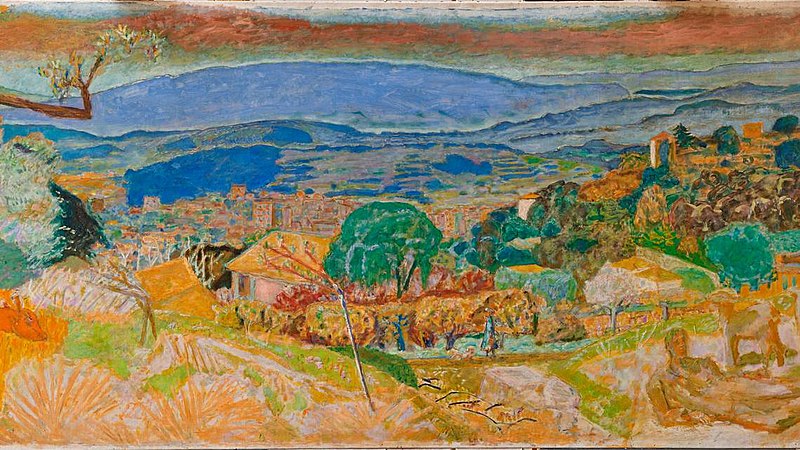 Bright, loud, but delicate, Bonnard’s paintings adorn the walls of the Tate Modern. His joyous paintings celebrate art and the process of making it, without seeming superficial and shallow. It is an exhibition well worth going to if you want to see some gorgeous modern art.

Bonnard was part of the post-impressionist movement but has often been overshadowed by his contemporaries Matisse and Picasso, even though they were often exploring the same things, namely, colour. Perhaps this is the reason why the Tate decided to pick Bonnard for a retrospective exhibition, especially since England was as important to his career as his homeland of France. The exhibition gives a thorough overview of Bonnard’s time as an artist, spanning his brilliant landscapes and muted nudes.

Bonnard had an interesting process, which the exhibition highlights with its title ‘the colour of memory’. Even though his paintings were often more rooted in reality than some of his fellow artists, they were far from direct representations of real life. Memory played a key role in the development of his paintings into the vibrant moments which you see depicted in the exhibition. We see that he only did brief sketches of the scenes he wanted to create, but the rest he would paint from memory, making the paintings intensified remembrances of a moment rather than of reality.

The painter obviously loves making art, and you can feel his enthusiasm when you walk through the exhibition.

The exhibition does a good job in highlighting how location influenced Bonnard. He moved around France continuously during his lifetime, meaning that paintings needed to be mobile. Sometimes his car seemed to be his studio, as that was where his works spent much of their time. Similarly, Bonnard shifted his focus from painting to painting, meaning that some were not completed for many years as he continued to make small adjustments to them. Both his lack of a fixed position and the long span of his painting process meant that he had to rely on his memory to complete his paintings, and you can definitely tell. People are in most of Bonnard’s paintings, even his landscapes, but sometimes you have to stare really hard at the canvas to spot them, as they are only outlines. They seem to face the colourful landscape and are taken over by his memory of the moment. Bonnard’s densely saturated works are only infused with reality.

Bonnard has been known as a rather withdrawn artist, and the curators of the exhibition took it upon themselves to broaden his image. Although most of Bonnard’s works are domestic, there were two paintings included whose subjects were not his private domain. The Fourteenth of July and A Village in Ruins near Ham were part of Bonnard’s response to the First World War, and are both very distinct from his typical works, with their drab and artificial colouring. However, although these paintings cast a new light on Bonnard’s work, they hardly outweigh the sheer number of paintings which focus on his interior life. Many of his works have the same viewpoint: inside looking out. A window or door create a kind of frame for the wild colour of nature that peeks through, but the painter is safely enclosed indoors. Oftentimes his wife, Marthe de Meligny appears in his paintings, acting as another personal detail that makes his loud paintings also seem quite private.

Altogether, a lovely exhibition on an artist whose work doesn’t disappoint. His paintings may not have been as groundbreakingly abstract as his fellow artists, but they have their own charm. The painter obviously loves making art, and you can feel his enthusiasm when you walk through the exhibition.

THE C C LAND EXHIBITION: PIERRE BONNARD THE COLOUR OF MEMORY is on until the 6th May at the Tate Modern