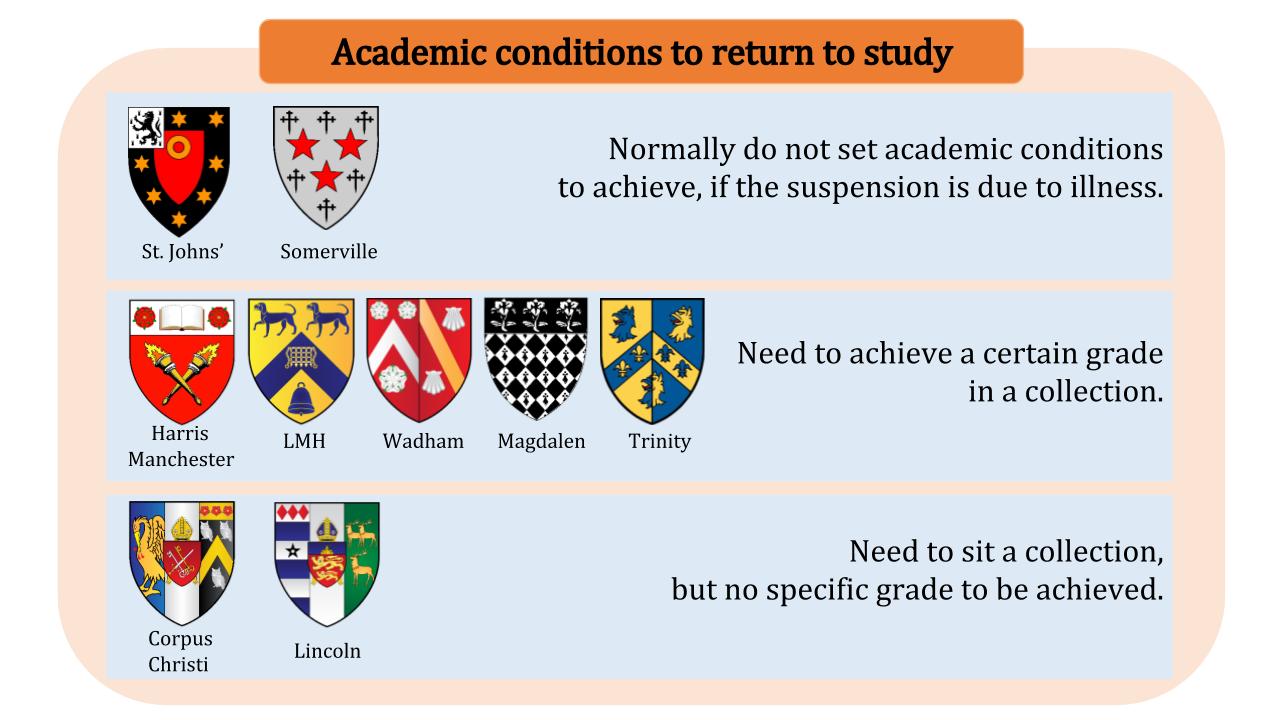 Suspension is becoming increasingly common in Oxford, having risen by 68% since 2011. Yet it continues to be an invisible side of university life and an investigation by The Oxford Student has found that there are considerable differences in the way that colleges treat suspended students. This gives lie to a commonly held assumption that all suspended students are treated equally.

There is a baseline regulation concerning “suspension of status” set by the University, but each college has a right to decide the treatment and status of suspended students beyond this. Like so many other issues at Oxford, inconsistencies stem from the significant discretionary powers that colleges have over their student body. This investigation found that academic conditions that are required when suspended students return to study and the accessibility of college welfare services and, were the most significant points of departure between colleges.

The first and most marked difference between colleges is “an academic condition” required in order to return to study. As well as a fitness to study assessment, many colleges ask for some sort of academic requirement to be fulfilled but are often unclear about what this might be, usually leaving it to the discretion of individual tutors. Some colleges such as Corpus Christi and Lincoln oblige suspended students to sit a collection. Other colleges even ask students to achieve a specific grade in the collection. This includes Harris Manchester who asks for 60% at the collection. Keble, LMH, and Wadham require a 2:1, which seems to be standard among those colleges that require a collection.

“… when I’d missed a couple of essays, [a tutor] just asked me bluntly when I would be suspending again…”

The LMH rustication guideline explains that the reason for this is “to ensure that you won’t be stressed due to being behind on work after time away from your degree rather than [it] being a punishment.” This justification seems fairly typical. However, the lack of clarity regarding what the consequences of not achieving this requirement can be disconcerting for suspended students. The most damning case concerning academic conditions is University College, which stipulates that “if the Student fails to meet any condition as to return, then the Student ceases forthwith to be a member of the College”. This puts considerable mental strain on suspended students returning to academic life.

Even for those students who aren’t made to sit collections on returning from suspension, the process of coming back can be challenging. The Oxford Student spoke to a Modern Languages student from St Anne’s who described her transition back to college as “confusing and very difficult”. She said she “had no idea who to contact or what to do about coming back as the college never contacted me about anything at all while I was away so it felt very rushed and bewildering”. Another student, who did not want to reveal their college, said that following their return, “when I’d missed a couple of essays, [a tutor] just asked me bluntly when I would be suspending again. It was very threatening”. This lack of support and communication between colleges and their suspended students, is clearly having a negative impact on those who are already going through a difficult time. Ambiguities resulting from colleges constructing their suspension policies on a ‘case-by-case’ basis also creates uncertainty for suspended students on what normal procedure is, as well as making it difficult to compare the overall experiences of these students.

There are some consistencies between colleges. Most do not allow suspended students to access to their site, library, sports facilities, hall or social events without express permission. This tends to be justified by a lack of resources and the difference in status of suspended and fee paying students. While making this distinction between suspended and current students is understandable, Keble College’s justification for this seems unnecessarily jarring, as they argue that “the presence in college of undergraduates who are not on course is a distraction to those who are”. Indeed, one suspended students’ representative spoke to The Oxford Student of “a lingering attitude that suspended students with mental health problems (the main reason people suspend) will somehow be contagious if allowed into college and will drag everyone down with them”. It is little wonder then, that suspended students may feel isolated from the college community.

Other colleges are better at providing support. St Edmund’s Hall, for example, encourages suspended students to access to college welfare services while on leave. Worcester, Wolfson and St Anne’s also allow access to the college library and welfare facilities. However, these colleges appear to be in the minority.

The main issue seems to be just how dependent a suspended student’s experience is on contingent factors. The Oxford Student spoke to a member of the Campaign for Suspended Students in Oxford (Suscam) who commented on “how shockingly different people’s experience of suspension can be. Depending on the year you suspend, your college, your tutors, everyone’s process is different”. This lack of uniform procedure and support can leave suspended students, some of the most vulnerable in the university, out in the cold. The same committee member said “one theme I have heard time and time again is a widespread feeling of isolation and confusion, and feeling ‘left behind’ or ‘forgotten’”. Another Suscam committee member reiterated this sentiment saying, “I think often colleges don’t consider how isolating the experience of suspension can be and in their eyes a suspended student basically disappears off the record for a year”. This sense of seclusion seems to be a direct consequence of inconsistent and unclear college suspension policies.

“students suspending their studies have a right that clear and timed conditions of their return be drawn up and presented to them.”

That is why one of Suscam’s main aims this year has been getting suspension representatives in every college who could provide detailed advice and support. Suscam feels this is particularly important as there are many things that colleges don’t clearly explain and that students might not think to ask, particularly when going through a distressing time. For example, Suscam says that “students suspending their studies have a right that clear and timed conditions of their return be drawn up and presented to them. This document should always be produced with the student’s best interests at heart and students should feel free to discuss and negotiate those conditions if they think it necessary”.

In the Oxford Student Union’s policy outline 2018/2019 this stance is supported, with the SU recommending that “as a minimum, suspended students should have the same rights to access college site, events and facilities as guests of on-course students at weekends.”  They also think that “re-entry criteria for undergraduates following suspension of status for medical and/or welfare reasons should be based on fitness to study and not on current levels of academic performance”. They argue that any academic conditions that are attached to return should measure whether the student can research and write an essay, or complete a collection paper, but not about whether the student can score a particular mark above the university pass mark. This is a guideline which evidently many colleges are not currently following.

Ultimately colleges’ unclear, inconsistent or harsh suspension policies are affecting the university’s most vulnerable and overlooked students. The fact that suspended students’ experiences can be so different based on such localised factors as which tutor they have or which college they go to seems grossly unfair to those most in need of support.

With thanks to Maya Middleton-Welch and Henry Screaton for their help in running this investigation.