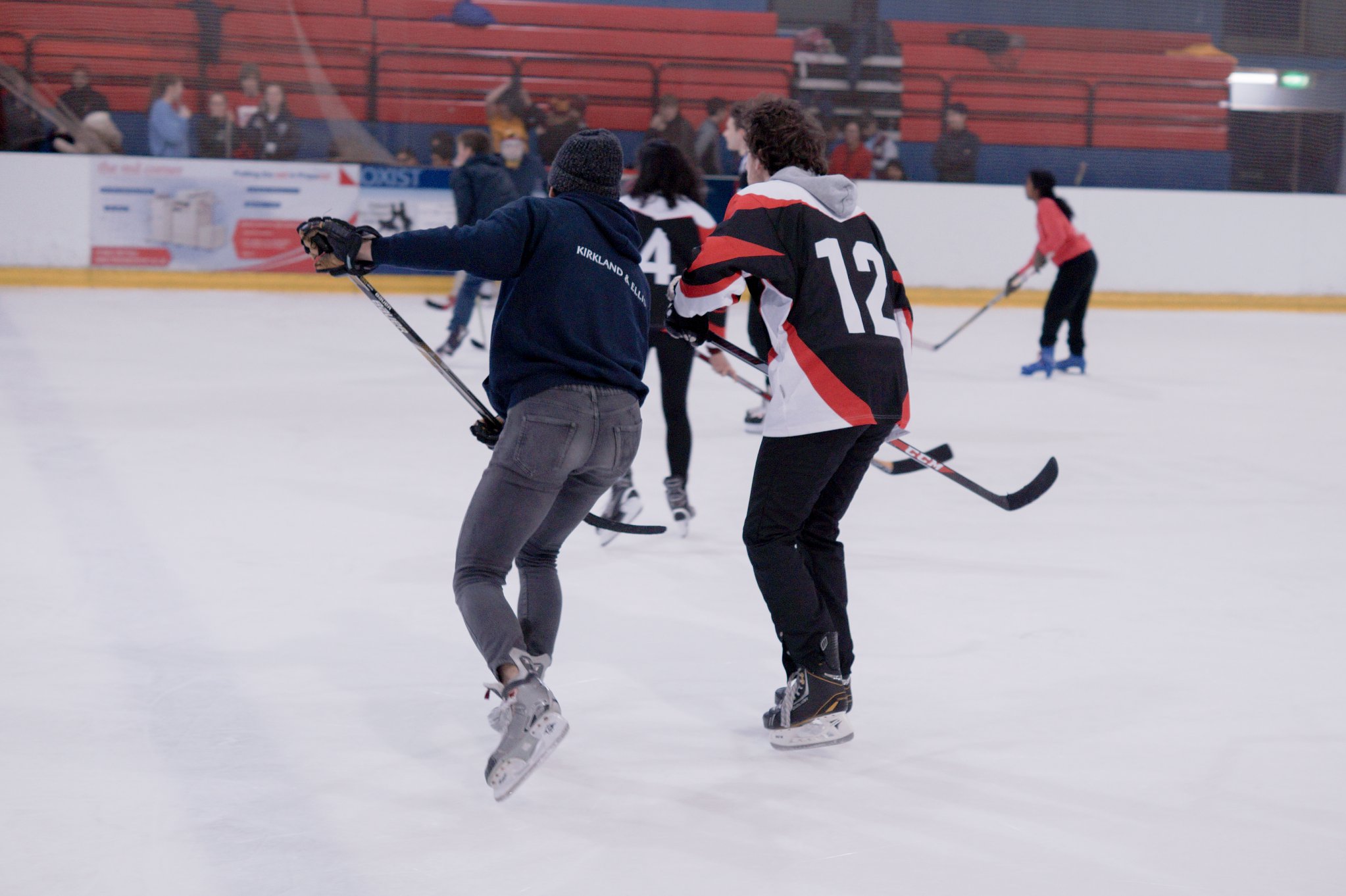 Overnight on Friday 15th February, there was the annual Alternative Ice Hockey (ALTS) cuppers. This tournament is 30 years in the making. So what is “alternative” about ALTS? There is no need for huge amounts of padding and kit like you see in normal ice hockey, and far less chance of getting injured too; the pucks are really soft, and are kept low towards the ground (air shots are not allowed). Aggression is also kept to the minimum as well. At ALTS everyone is welcome, from very competent to never having ice skated before!

This year, there were 27 teams competing for the title. They were first split into 4 mini-leagues, with everyone in the groups of 6 or 7 playing in short 3 minute games played using half the ice. The top two teams from each of the 4 mini-leagues went through to play in the quarter finals, and from then using the whole ice rink pitch, there was a direct elimination competition, with the winner going through only, until the final was reached.

The atmosphere was electric at the rink. There was huge support for everyone. Yes, some teams seemed to be filled with people who had had little experience on the ice rink, and they did indeed get trounced by teams with more experienced players. However, one such team had such joy when they managed to hold another team to a draw in the three minutes. That was wonderful to see!

In terms of kit, there was some noticeable winners. First there was the Magdalen team, “Oh deer!”, who not only had the best pun in their team name, but also had some excellent ice hockey jumpers. The Pelicans had some excellent home-made kit, with what seems to be painted black on orange t-shirts. However, Sommerville, with their black kangaroos on a red kit, certainly had the most striking kit.

I followed the trials and tribulations of team “Oh deer!”. They had a fantastic series of matches, where they unfortunately lost the first four matches primarily due to their inability to shoot on target. Finally, in their last two games, they worked out where the goal was, and managed to win them comfortable. Alas, it was not enough to go through, and so they were eliminated.

The finals were fantastic – a real treat of fantastic ice hockey, played by two very competitive teams Wadham (Perpetual Motion Squad) and Christ Church. It was a closely fought match, with it going right down to penalties, but after a nail biting finale in the end Wadham managed to gain the upper hand, and so managed to win the wanted trophy of ALTS cuppers!

The night was fantastic fun, incredibly well organised by the committee, and well worth getting involved. ALTS cuppers won’t come for another year, but you can still get involved with this amazingly fun sport. Just turn up with a small amount of money in term time at 11:15pm on Wednesday or 11:45pm on Friday at the Oxford Ice Rink, and you can enjoy the same fun. Teams change every week and are created on the night ad hoc, so you don’t need to come with anyone else to still be involved.