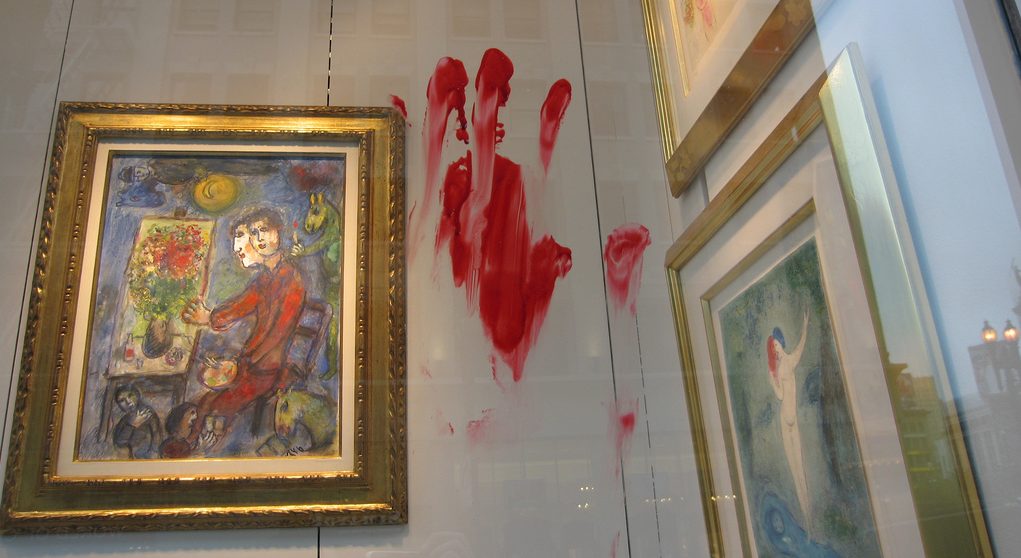 As Oscar Wilde declared in his preface to The Picture of Dorian Grey, ‘All art is quite useless’.

Wilde’s statement falls on deaf ears in Dan Gilroy’s tale of pretentious art dealers and material greed. After taking paintings from the apartment of a deceased artist, Josephina (Zawe Ashton) is cajoled by boss Rhodora (Rene Russo) to advertise them at a high price. The pretentious critic Morf Vandewalt (Jake Gyllenhall) is also captivated by the works. Yet, as the swift brushstrokes in the opening credits suggest, art-dealing and horror start merging together as characters meet grisly deaths.

Gilroy’s satirical edge is razor-sharp from Buzzsaw’s opening images as Vandewalt swaggers into a building wearing shades, switching them to a pair of square-rimmed glasses as he marvels at a piece of artwork. The subtle style change signals the hollow nature of his priorities, which only increase as he dismisses a passing critic before dramatically praising another painting.

There are many ‘eccentric Jake Gyllenhall’ moulds to enjoy thanks to the actor’s diverse skills, ranging from Enemy (2013) and Nightcrawler (2014) to his particularly intriguing performance in Okja (2017). He manages to balance quirkiness to just the right degree here, and is one of the only characters who deserves the slightest amount of sympathy when events start getting gruesome.

The gore itself feels rather overdone, and straddles an uneven line between the comic-style violence in Kill Bill (2003/2004) and more gratuitous fare one might find in the Saw franchise. The satirical message remains clear, though. If you try to sell art for financial gain, you’re going to be punished. Violently.

If you’re looking for a subtle allegory about the putrid nature of commerce and selling out to the man, you won’t find it here.

Gilroy admitted that the film’s plot was inspired by his experience with studio executives on the ill-fated Nicolas Cage film Superhero Lives, which was never released due to worries about box office gains. But at least that spawned some cathartic rage which was directed towards the murders of pretentious artists on screen, right?

The horror elements of the film are complemented by the constant focus on the exhibition room itself; characters might walk outside the building for a few scenes, but are always drawn back to the space. Most of the people occupying the space are rich, yet possess no discernible talent. Only artists looking for true creative inspiration survive the vengeful onslaught as the dead artist Vetril Dease wreaks revenge for turning his paintings into commercial pieces of art, ignoring his last wishes that all the works be destroyed.

If you’re looking for a subtle allegory about the putrid nature of commerce and selling out to the man, you won’t find it here. If you want to watch a cynical film about pretentious artists being killed with some decent cinematography courtesy of Robert Elswit, then it’s enjoyable, gory fun. After all, it is the spectator, and not life, that art really mirrors.

Hilda’s to hit the mark with Cyrano

The Rape of Lucretia – A Joint Review