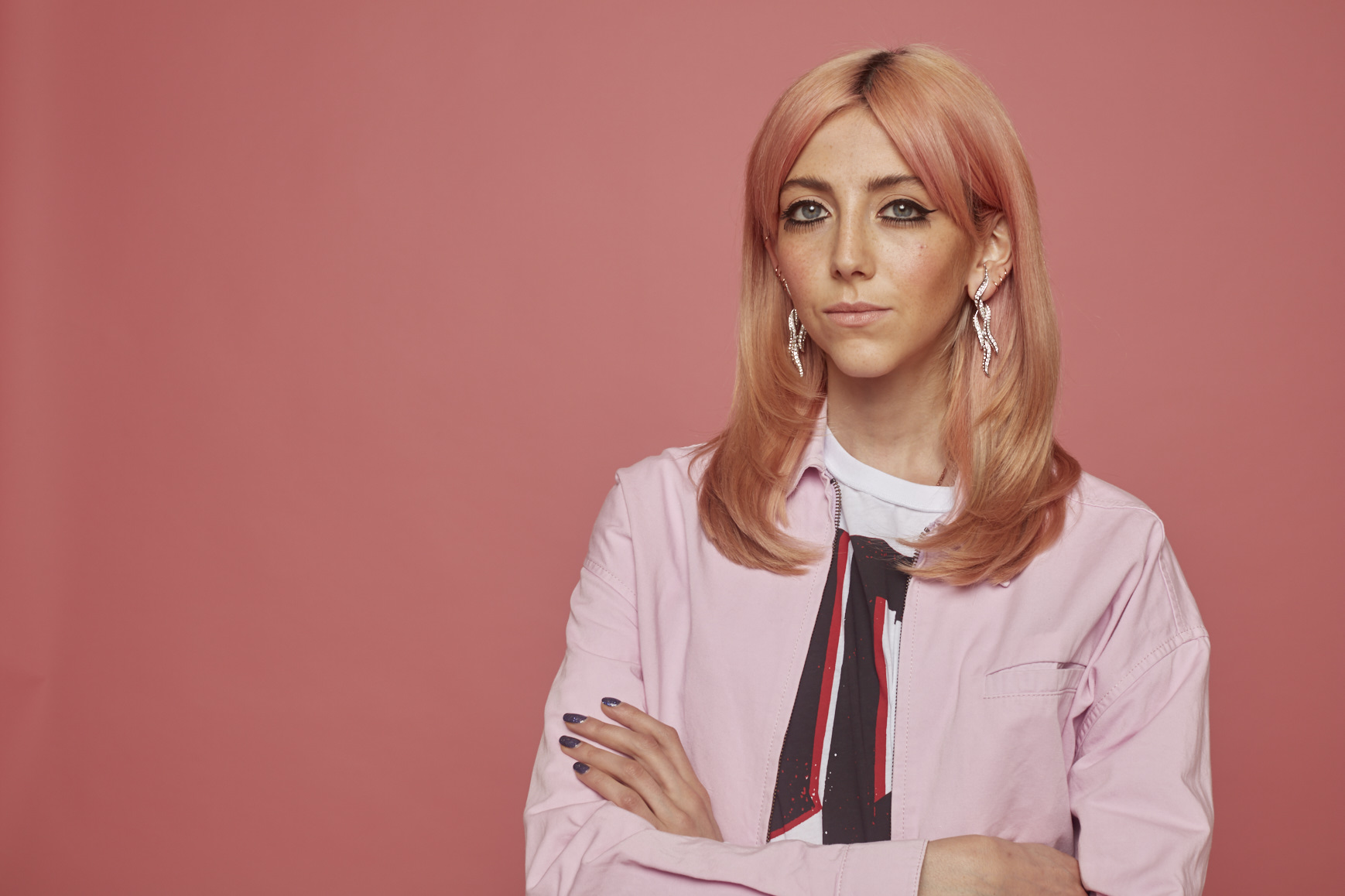 At the age of just twenty-three, London-born Scarlett Curtis has already done a lot of things. As the curator of Feminists Don’t Wear Pink (and other lies), a collection of essays written by various women, herself included, on what the F-word means to them, one might be tempted to label her a writer. As a former The Sunday Times and The Times columnist, a journalist. And as a founder of The Pink Protest, a community of social reformers campaigning for women’s rights across the globe, a feminist activist.

I caught up with Scarlett before she spoke at the Oxford University Media Society, and it is safe to say that, with her bright-pink hair, light-pink maxi skirt and neon-pink nails, she lived up to the one expectation that I had of her: a feminist defying the rules of what a feminist “should” look like.

I’m interested to know what came first for you – was it the activism or the writing?

It was definitely the writing. I left school when I was fourteen because I was really ill, so I was pretty much out of school from fourteen to nineteen. I had a chronic pain condition in my back so I couldn’t really walk; I was in a wheelchair most of the time. I was like, OK, all I can do is basically knit and do crafts and read books and watch Grey’s Anatomy.

After I’d been knitting for a while, I started a knitting blog. I thought I was going to be a professional knitter. Then it turned out I was pretty bad at knitting, but I was OK at writing about knitting. Then it kind of went from there. I started getting asked to do various different ‘teen perspective’ articles for magazines off the back of my blog. I started journalism when I was fifteen.

You were living in America at the time at the 2016 election, and in one of your blog posts you talk about how frustrating it was not being able to vote. Do you think the election of Trump has shaped your feminism?

Yes! I started my feminist journey when I was sixteen or seventeen. I realised through reading that a lot of what happened when I was ill was to do with me being a woman – I was treated pretty badly by a lot of people during that time.

I started reading a lot of Gloria Steinem and Bell Hooks and people like that; I always say feminism was a form of self-help for me. I was already a feminist when I went to university and I was doing a degree in media and feminist social movements.

I always say feminism was a form of self-help for me.

Before the election, I had been doing a lot of campaigning for Hilary. Then post-election, I started doing a lot of activism with the people I met through the campaigning. What I think was the most inspiring thing about that, even though it was a horrible time, was that it really felt like what I hoped activism could be but didn’t really know it could be anymore.

I had worked for different NGOs for three years at that point, and I loved working for charities and NGOs but it always felt very corporate. You’re working for a company – there’s a lunchbreak and a payroll and a HR department.

Then suddenly I was in people’s living rooms, going down to JFK at like a minute’s notice to object the Muslim ban. All this stuff felt so energetic and raw and grass-roots. It was an amazing time to be there politically, but a horrible time to be there emotionally. Two years post-election, I was like, I can’t do this anymore. I found it very hard, and I’m very lucky that I was able to leave.

Did you notice any differences in narratives surrounding feminism in the US versus the UK?

Definitely. I was in New York – that’s the hard thing about America, it’s like fifty countries in one. I was living in a super feminist, academic circle. Everyone I was with, you had to declare your pronouns before you went into a room.

I was in groups where women would be living zero-waste lifestyles because they were objecting of capitalism, and everyone was socialist, and it was very progressive.

You’re living in that bubble within a country where a lot of women didn’t vote for Hilary because they didn’t think a woman could be President. Because of that you get a lot more tension and conflict, it’s two such polar opposites.

We have elements of that here, but I also feel like we’re all slightly learning together. Coming back to England I almost felt like everyone was a bit behind, but I also felt like that gave us the opportunity to make it more of a cohesive movement and more of a bipartisan, “anything” type of movement, whereas in America it’s so hard.

What aims did you want to achieve with your book?

I knew I didn’t want to do a book about feminism on my own. I wanted to do something where it gathered together all these different women. It’s very daunting making a book about feminism because I have read so many incredible books and I was like, what can I possibly add to this? The goal was never to make something that was going to be studied on feminist theory courses or read by the most long-standing feminist.

The goal was to make something for young girls who maybe didn’t know they were feminists, and then would read the book and be like, that’s a word I’ve always heard but never really knew what it meant, but it can mean all these different things, and I guess I can’t really say I’m not a feminist anymore.

How did you go about selecting women to write the essays?

I started reaching out to a lot of women that I’d worked with at various different NGOs, and then people that I knew, and then emailing the emails on people’s Instagram just hoping that they might read it.

What does it mean to you to be a feminist and wear pink?

I kind of think it has nothing to do with it. We’ve made all these weird standards for feminists, where it suddenly isn’t a political ideology anymore; it’s like a dictation of how you should dress and wear your makeup and behave.

If you picture a Labour supporter in your head, you don’t go like ‘Oh yeah, they have to have hairy armpits and wear this colour’, you know, we just have these standards that we hold for women. But I do think a lot of people do think it’s dictated by what you wear and do.

I think for me, I thought that the fact that I loved makeup and doing my hair and the colour pink meant that I couldn’t be a feminist, and once I realised that was so not the case, it was a big moment for me.

I thought that the fact that I loved makeup and doing my hair and the colour pink meant that I couldn’t be a feminist.

In your essay ‘Feminist Comebacks’ you talk about fighting for women across the globe. How important do you feel intersectional feminism is?

I think it’s the most important thing. As white women, we have pretty much everything going for us. I think the movement is about non-white women, and fighting for people that lie in the intersections of being a woman.

What do you think about public figures such as Taylor Swift being labelled as ‘white feminists’? Is it fair?

I think it’s a pretty random one for her because she’s never said much either way. She’s a white woman from the South, it’s not that surprising. I don’t really know. I think the label is overly critical. Everyone has stuff to learn.

If you are a feminist who’s only ever advocated for the rights of white women you have a lot to learn, but I also think the label ‘white feminist’ can be thrown around too quickly.

How do you see your career developing over the next few years?

I’ll always write and I’ll always do activism – I almost say I do it like exercise, it’s just the thing I actually enjoy. I’d love to study more; I feel like my degree really informed all the work that I do.

You were a columnist for The Sunday Times and The Times. Have you got any advice for students hoping to break into the media industry?

One thing I would say is publish your work, even if it’s self-published. There’s a huge difference between writing every day and having the experience of having people’s eyeballs on it.

Ultimately, I feel so lucky that I was blogging when I was, because it was at a time when people really were reading blogs. I have so many friends that want to write but aren’t doing it. It takes a while to get good, but you can’t get better unless you’re practising.