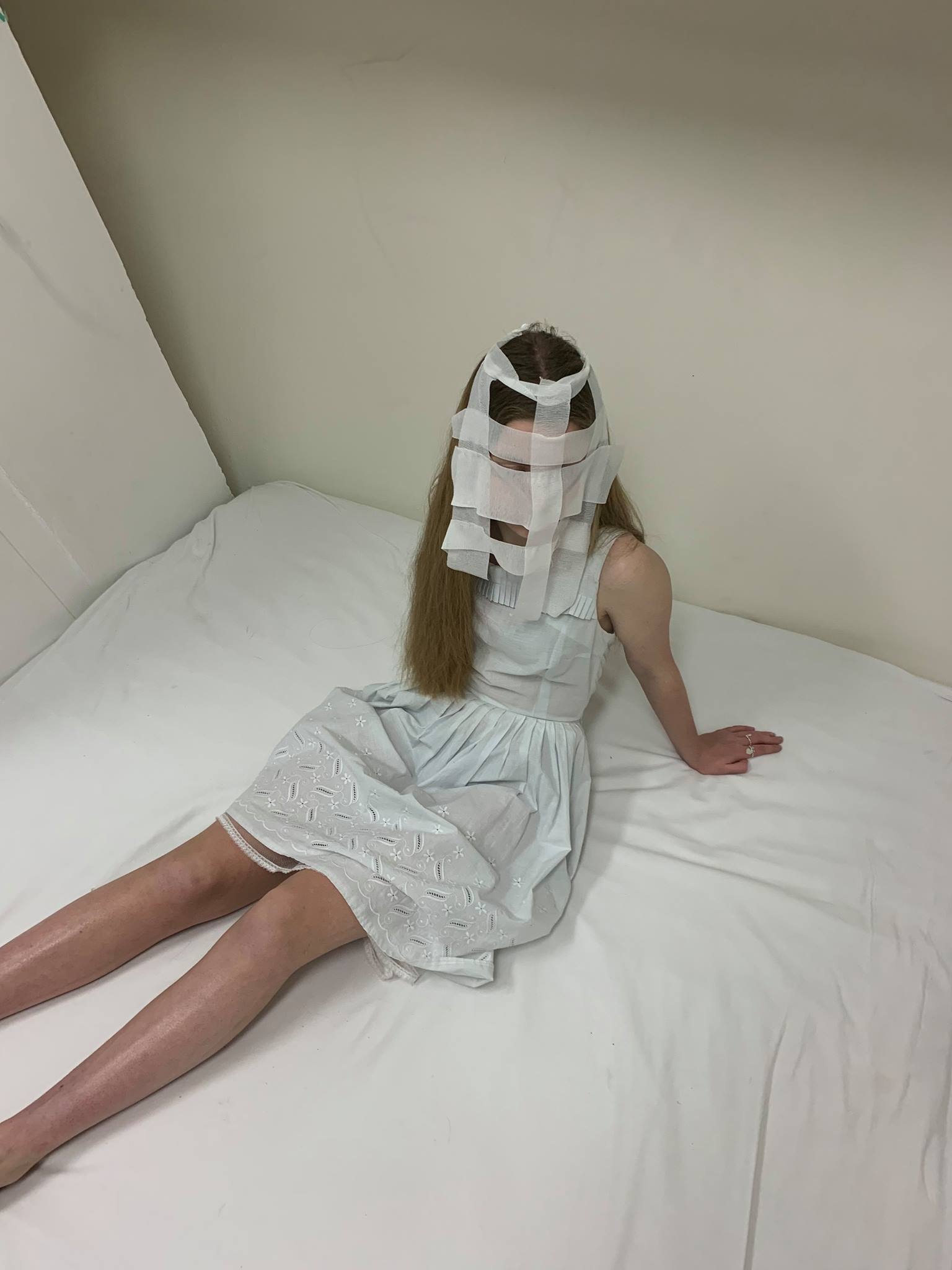 How long have you been working on writing this play and how did it come about in the initial stages?

I actually started writing Bandages in about 2016, when I was 17. My drama teacher had signed us up for the National Theatre New Views competition and a group of us would meet up occasionally and talk about ideas. The idea hit me fairly fully-formed. All of the other kids were like “I’ve started writing a play about parents divorcing” and another was like “I’m writing about teen drinking” and then I was like “I’m writing about a girl who cuts off her own face”. My teacher was like “Um…okay?”.

It was inspired by a lot of things. From my own experiences as a teenage girl of the sheer power that physical appearance has in the world at large, those of my friends, to a wide range of literature, film and theatre. Tess of the D’Urbervilles cutting off her eyebrows so that she could travel safely without a male chaperone; the symbol for vanity in Se7en being a model who has her face mutilated; drag queens like Sharon Needles and DWV, especially their song Silicone; stories about disfiguring acid attacks in the news; Fratic Assembly’s Love Song; and of course, In Yer Face theatre, like Blasted and 4.48 Psychosis by Sarah Kane and Shopping and F***ing or Snatch by Mark Ravenhill, where audiences were confronted and made to see the hideousness of the world. I definitely consider Bandages a somewhat diluted In-Yer-Face play, wanting to really drive at discomfort and unpalatable-ness in the theatrical space, where everything is often a glossy and smooth imitation of reality.

Anyway, the play was long listed which meant that a professional playwright came in to give me some feedback on it, her words exactly were “you’ve got a lot of rage, haven’t you?”, which pretty much sums it up. I really wanted my play staged but coming from a low income background, I found few opportunities to do so, though the wonderful Theatre N16 did develop and showcase one scene as part of their Herstory feminist scratch night. When I came to Oxford, I finally got the opportunity to see it fully realized.

Do you have any favourite scenes?

It feels weird saying “Oh yeah, the force-feeding scene is my favourite” but, in a sense, it is. In the scene, Isabelle’s mother catches her eating chocolate, a strictly forbidden substance in their household. She then force-feeds Isabelle handful after handful, all the while calling her pet names and stroking her hair, claiming that she’s finally giving her what she wants.

This scene resonates with me a lot because I’ve always struggled with my weight and have felt firsthand just how hostile the world can be if not enough people in it find you desirable. When I was 13, I had my best friend’s boyfriend, who wanted alone time with her, try to lure me off with a chocolate bar because apparently a bar of Cadbury’s caramel is like catnip to fat girls. I was bullied and taunted and, like many girls of a range of body types, had learned to thoroughly hate my body by the time I reached adulthood. My mother’s well-intentioned attempts to make me “healthier” contributed to this and I’ve augmented a lot of those things in the mother-daughter relationship you see in Bandages. Isabelle’s mother, in her own way, believes she is doing the best thing she can for her child, but her desire for control and perfection takes her way overboard.

When we are utterly stripped of power, often comedy is our last bastion of autonomy and resistance…

Where is the comedy amidst such a dark, disturbing setting? How do you walk that line without it becoming distasteful?

I often find that comedy is often so intwined with the dark and disturbing. Children find the cartoon violence of Tom and Jerry hilarious, and babies often laugh hysterically when adults feign hurting each other. We laugh at slapstick, at people in sitcoms losing their jobs and hating their lives and suffering with incompatible spouses. Comedy is completely a source of joy, and I do stand-up and improv comedy because I like to bring light, but it definitely has its dark shades too. Bandages plays on not the kind of laugh-out-loud, slap your knee humour that you’d find in Live at the Apollo, but the creeping, lightly amused discomfort of smiling along with someone who should, by rights, make you sick. We’re talking the involuntary muscle flexes of enjoyment that come from someone being abhorrent but confident and witty, or someone in a really horrible situation that turns to humour to try and make themselves tougher, more in control. When we are utterly stripped of power, often comedy is our last bastion of autonomy and resistance, think political satire in dictatorships, or gallows humour.

The production description talks about the ‘catch-22’ of female beauty standards being that women are persecuted whether unattractive or attractive. Tell me a bit more about this ‘catch-22’ and how the play unpacks it?

As a teenager, I noticed, as many of us do, that women couldn’t win. If they were deemed “ugly” or “unattractive”, they were dehumanised, bullied, treated like they had absolutely no value. If they were deemed “beautiful” or “sexy”, however, they were objectified, cat-called, sexually assaulted and belittled. There was no safe middle ground, no way to win, but constant expectations on how to behave, dress and speak in order to reach this ideal mirage in which you are no longer in danger.

Bandages deals with this catch-22, this inability to escape beauty standards and expectation, by closely comparing both sides of the coin. The mother, Meddy, is accused of being ugly, and her punishment is to have her face mutilated. She covets her daughter, Isabelle’s, beauty, and by rights she should escape this fate, but the pressures of being desired, coveted, beautiful drive her to mutilate her own. Even when Isabelle is faceless, she is not safe. Being a woman is a tight-rope walk, and most of us are absolutely going to fall, but it’s so normalised and ingrained that we think we’re in the wrong for not being able to keep our balance.

… I really needed someone to step in and be like “Hey, this is just a play. Chill out, Shakespeare”…

How does the idea of ‘legacy’, between mother and daughter or otherwise pervade this play?

In Bandages, the mother character, Meddy, and the daughter, Isabelle, literally occupy the same body. They are played by the same actor, the brilliant Lou Lou Curry. There is a younger version of Isabelle, played by Leanne Yau, but older Isabelle and Meddy are interchangeable from scene to scene. This really kicks into touch the idea of legacy and inheritance between mothers and daughters; Isabelle is both the victim and the abuser in this play, literally stepping into the shoes of one of the people who has controlled and exploited her. Isabelle is not merely sympathising with her mother, she is empathising on the deepest level she can, becoming her, which has some very interesting psychological consequences…

How has it been co-directing a play you’ve written yourself? Is it hard to take a step back from your text?

I intentionally chose to hunt out a co-director because I was so close to the project, so intimately linked to it, I really needed someone to step in and be like “Hey, this is just a play. Chill out, Shakespeare” and Lou Lou was very much that. I took care of rewriting the script and casting the actors, and Lou Lou took on the rehearsals themselves, allowing the cast to lay the groundwork without me hovering like a pageant mom (though that might have been appropriate, given the subject matter). Unfortunately, our lead actor had to drop out about a week ago, and we auditioned a few people, but ultimately realised it would probably make practical sense for Lou Lou, primarily an actor, to take on the role. She knew the blocking, of course, because she’d blocked it! So I am no longer able to avoid the drivers seat, and I am now directing solo, but having Lou Lou on both sides of the directors table has made rehearsals massively collaborative. I am not able to covet my play as my own private passion project, because there’s now a whole cast of people who also feel they have a stake, a level of ownership, and that’s actually really cool.

Bandages opens at the BT Studio on Tuesday

A word & whisky with Robert Hardy