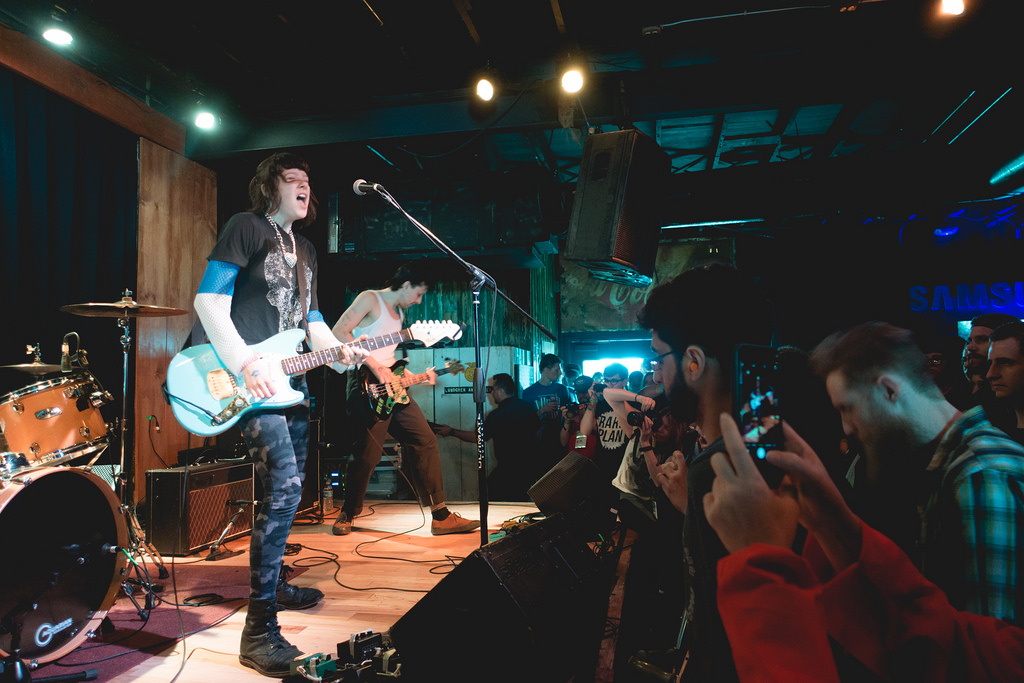 “What was wonderful about going through some dark times,” confesses Katie Monks, lead singer and guitarist of rock band Dilly Dally, “was the fact that I had to turn inward”. Dilly Dally’s latest album, Heaven, might be read as a rallying, fiery expression of self-love and inclusivity. The record functioned as the band’s auditory toolkit as they reassembled after a period eclipsed by drug addiction and mental health struggles. “With Heaven, I just wanted to make an album that would provide the band with subliminal messages of self-care.”

Hailing from a quiet suburb just outside Toronto, Canada, Dilly Dally have found music as a means of riling against everyday sexism and oppression, crafting a punk rock sound that is imbued with heavy, distorted intensity.

“Everyone’s telling me it’s our first time in Oxford, but I could have sworn I’ve been here…maybe in a dream” muses Katie, as we sit down for a chat in the band’s changing rooms just before their headline gig here. On a frosty January night, Dilly Dally graced the stage of The Bullingdon, with the rising post-punk group Hotel Lux as a terrific venue-warming support. Both of us wrapped in faux fur coats, Katie slouched on a low-slung sofa, it felt like an intimate conversation—a ten-minute excursion from the chaotic schedule of their European tour.

Our chat jarringly slides from discussing the best Szechuan noodles on Cowley Road to Dilly Dally’s inter-band strife, and how they came to find spirituality and catharsis in music. Born out of a dark and emotionally tumultuous time for the band, their acclaimed 2015 debut album, Sore, soared to success and a triumphant world tour but left the band on shaky foundations. “During the first album, we were all standing on thin ice with our mental health, with our relationships with each other and our relationships with substances. Things felt uncertain and rocky and at the same time, all of our dreams were coming true. So, it was very bittersweet in that way, and there were lots of highs and lows.”

But Dilly Dally’s latest release, Heaven, signals the beginning of a new chapter for the band. “It feels a lot more sustainable”, admits Katie. As the doom metal guitar riffs escalate to an ebullient crescendo in the album’s final track, aptly entitled ‘Heaven’, the record’s themes of acceptance, healing and self-assuredness come into place.

Heaven signals the beginning of a new chapter for the band. “It feels a lot more sustainable”

Heaven is also a coming-of-age record. It’s a musical incarnation of our eternal restlessness as well as the band’s need to unshackle themselves from the suburban inertia that defined their childhood in Canada. “You know how all the houses look the same, and there’s more police around than necessary…Me and Liz [Liz Ball, Dilly Dally guitarist], growing up together, we always had this instinct to fuck it all up, like just spray paint stuff, throw toilet paper everywhere, do everything that we weren’t supposed to do.”

Armed with a fresh sense of perspective, Heaven represents an optimistic brand of pulp rock, rewiring their fiery energies into a sound less about punching you in the head and more about getting inside it. Compared to their feminist-themed debut record, “[Heaven] feels so much more secure and solid, it feels so great to put out a record that all four of us contributed to – a lot more than the first one, and represents all of us as artists better. I feel like, behind the scenes, we’re just a lot stronger as a unit. We’re more capable to keep touring and writing, and not have to take a break.” This impacted the way that Dilly Dally approached their song-writing, which itself became a form of self-care. “It was a lot more about what I want the album to be, versus what would be cool to play at the small venue in Toronto next week.”

Listening to Dilly Dally’s raw and sometimes brutal lyrics, it’s easy to get a sense of a mind—or minds—in turmoil, and a feeling of extreme vulnerability that is always tinged with hope. A couple of lines from ‘Marijuana’ embody that ambivalence towards the protectiveness of spirituality, as Katie confronts a complete deconstruction of her life as she knew it: ‘It’s like these angels got wrecked and torn apart/ Inside of me’. There’s a moment in the song’s music video where the backdrop gives way to a torrent of raging flames—an image which speaks to the album’s narrative of rebirth and transcendence. Buffeted by life’s storms—from addiction to relationship lows—Katie felt bloated on
negativity.

She set about writing and recording in a new way, cutting back on pretence and defying people’s expectations of the band. “I left social media, and I tried to change up whatever playing set up I was writing songs on before; so I got a looping station, I got some more pedals, I got a white Flying V-guitar because I knew it would piss off everybody in the punk scene in Toronto who all love Fenders. So, I carved out some space for myself to write and it became really spiritual.

I grew up atheist – my parents are from Catholic Ireland and left to go to Canada with their Catholicism behind them. Growing up, I was actually quite afraid of religion, and I quickly found spirituality in music, which meant pushing away the whole world to find yourself. Even if you don’t have a bible or priests telling you what spirituality is, you can look inside yourself and find spirituality on your own.”

I mention the idea of ‘healing’, and it resonates with Katie immediately; the record is designed not simply for their audience—reaching out to them from the other side—but it’s also for the band members, reaching out to both each other and themselves. “Let me put it this way: if art mimics life, or whatever they say, Sore was such an angry album so by the end of it, we’re all gonna end up angry with each other and angry with the world. I was so tired of yelling every night on stage. I wanted to make an album that would not only help other people going through depression and addiction issues, but also my band. I didn’t need to explain that to my band mates for them to understand what we were doing. It was very much an album for ourselves, so that we could get off stage every night and still have energy to move forward.”

There’s still that desire to connect with other people, as in Sore, but with Heaven, it was also about turning away from them, which allowed them to inward. Yet even if the album started out with an inward-looking premise—“fuck everybody, fuck expectations!”—its optimistic, ferocious anthems still offer faith and uplift to others. For Katie, ‘the fact that it’s still resonating with people is mind-blowing’. Dilly Dally’s songwriting reminds us of the immense power in music, as a burning reminder of our inner strength to overcome even the darkest of times.