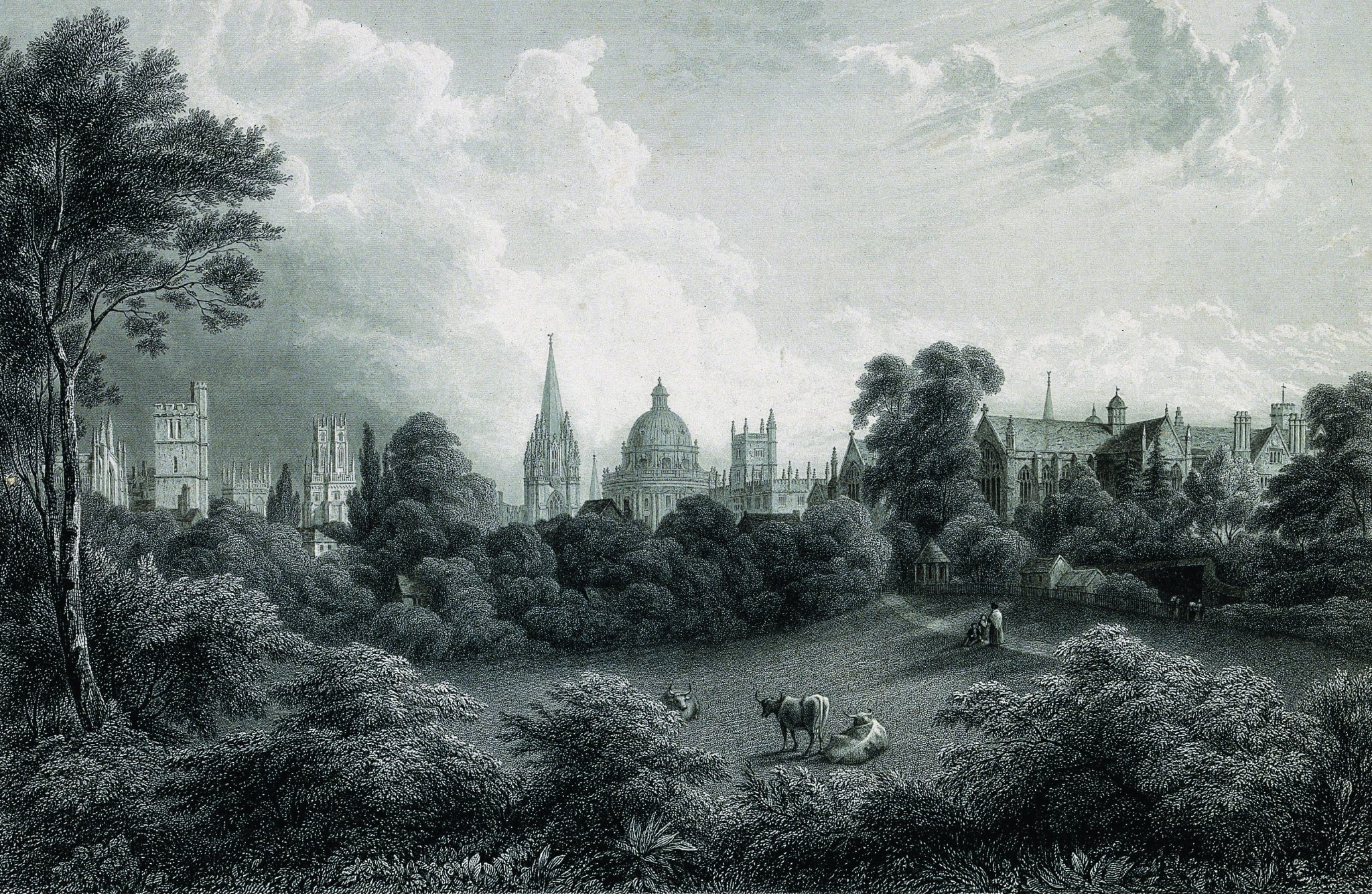 Through the first half of the seventeenth century, Britain was heading towards a scientific revolution. Francis Bacon, educated in Cambridge and rejecting Aristotelian philosophy, is credited with developing the scientific method, and in Oxford, advances too were being made. The flourishing of members of a forward-thinking network shaped the future of scientific study in the centuries that have followed.

John Wilkins studied at Oxford at Magdalen Hall (later refounded as Hertford College), graduating with an M.A. in 1634. He returned in 1648 as Warden of Wadham College, and under his leadership, the college prospered. Wilkins went on to marry Robina French née Cromwell, the younger sister of Oliver Cromwell, and also became Master of Trinity College in Cambridge: he was one of the few people to have headed both an Oxford and Cambridge college. Despite never achieving any particular scientific breakthroughs, his influence in Oxford was incredibly important for the advances of scientific knowledge in Britain.

One of the many people Wilkins attracted to Wadham was Christopher Wren, in 1650. Of course Wren became an incredible architect; his second project was the design of the Sheldonian Theatre, and St Paul’s Cathedral, completed in 1710, is regarded as his masterpiece. At Wadham Wren studied Latin and Aristotle’s works, but it was his association with Wilkins that led to the flourishing of scientific developments, with his strength in geometry.

[John Wilkins’] influence in Oxford was incredibly important for the advances of scientific knowledge in Britain.

Wilkins led a group, the Oxford Philosophical Club, mainly operating from 1649 to 1660, consisting of natural philosophers and mathematicians amongst other virtuosi. This club was following on from the Gresham College group, or the “1645 group”, in London, which included Wilkins and focused on experimental science. In total 50 names have been mentioned as being in the group, including Wren. They would meet regularly in the Warden’s Lodgings at Wadham to discuss the natural sciences and encourage experimentation, free of political distinctions and influenced by Francis Bacon’s works on the scientific method.

Another famous member was Robert Boyle. In 1654 Boyle arrived in Oxford, having moved from Ireland which he called “a barbarous country where chemical spirits were so misunderstood and chemical instruments so unprocurable”. Regarded as the first modern chemist, Boyle pushed forward the ideas of the experimental scientific method: his seminal work, ‘A Free Enquiry into the Vulgarly Received Notion of Nature’, looked at distinguishing physics from metaphysics. The name ‘Chemistry’ in modern science, originated from Boyle’s work ‘The Sceptical Chymist’. On the walls of University College you will find an inscription marking where Boyle lived between 1655 and 1668. It was here that he discovered the famous Boyle’s Law, describing the relationship between pressure of a gas and the volume it occupies.

On the same inscription, Robert Hooke, Boyle’s assistant, is mentioned. Hooke was slowly recruited into the group that Wilkins had formed, after arriving at Christ Church in 1653, and becoming assistant to Boyle by 1658. Hooke’s contributions to science are varied and include the spring balance, spring suspension for vehicles and the photocopier. He developed the air pump that Boyle used to discover his gas law, and in the inscription at University College it is described that he first identified the living cell using a microscope he made. He estimated he had made over 1,000 inventions and discoveries, so many that we take for granted every day and don’t realise he had a hand in. Samuel Pepys described him as the person “who is the most, and promises the least, of any man in the world that I ever saw” in his diary in 1665.

As this group, including Wilkins, Wren, Boyle and Hooke, developed and collaborated with the continuing Gresham College group in London, there became an emerging need for a central body to govern scientific experimentation and research. On 28th November 1660, a committee of 12, following a lecture on astronomy by Christopher Wren at Gresham College, documented a proposal of forming a learned society. Of this 12, seven came from Oxford: Robert Boyle, William Brouncker, Jonathan Goddard, William Petty, Lawrence Rooke, John Wilkins and Christopher Wren.

King Charles II approved of their intentions and in 1662 a royal charter was signed, creating the “Royal Society of London”. Lord Brouncker was its first president, and early meetings included Hooke, appointed as ‘Curator of Experiments’, performing experiments to the group. John Wallis, who served as Savilian Professor of Geometry at Oxford for a remarkable 54 years from 1648, was another of the Wilkins group who was an active member of the Royal Society. He is credited with introducing the symbol for infinity, and contributed greatly to the origins of calculus before Isaac Newton. The society to this day runs as the oldest national scientific institution in the world. Presidents, more recently than Brouncker and Wren, have included Sir Isaac Newton, Sir Humphry Davy, Lord Rayleigh, Ernest Rutherford and Oxford chemist Sir Cyril Hinshelwood.

Allan Chapman, historian of science at Wadham, has said: “Oxford’s achievements in the 17th century were founded upon a rich culture of experimental science, and between 1648 and 1660 the city housed probably the most dynamic scientific community in Europe.”

Within Oxford, the developments in science and the connections to the Royal Society continued later into the seventeenth century and beyond. Edmond Halley joined The Queen’s College in 1673, and whilst still an undergraduate, published literature on the Solar System and sunspots. Elected as a Fellow of the Royal Society aged just 22, he went on to make observations of an object now known as Halley’s Comet, predicting its return, which he unfortunately did not live to see. A plaque can be found at 7 New College Lane, where Halley lived.

“Between 1648 and 1660 [Oxford] housed probably the most dynamic scientific community in Europe.” – Allan Chapman

In 1683 the world’s first purpose-built museum building was constructed: the Ashmolean Museum, where now the History of Science Museum is located, on Broad Street. Created to house Elias Ashmole’s collection, the museum, sometimes attributed to Christopher Wren, became the focal point of science in Oxford in the late 1600s. It displayed to the public the new learning about natural philosophy and experiments which were being performed in the basement of the building, where Oxford’s chemical laboratory was housed, with undergraduate lectures and demonstrations given on the middle floor. The laboratory was used until 1860, when the new ‘Abbot’s Kitchen’ was built adjacent to the University Museum of Natural History on Parks Road. It was the first ever purpose-built chemical laboratory, and is still part of the chemistry department today.

In the same year as this laboratory was built, the British Association for the Advancement of Science hosted a debate at this adjacent museum, on Darwin’s ‘On the Origin of Species’, which was published seven months earlier. There were many prominent attendees, although Darwin himself was too ill to attend. The spotlight was firmly on Thomas Henry Huxley (supporting Darwin) and Samuel Wilberforce (Bishop of Oxford, opposing Darwin), and although no precise account of the words spoken can be found, it was said to be rife with heated exchanges and personal attacks, and attended by over a thousand people. In 2010 a stone pillar was erected outside the museum, marking the 150th anniversary of the event. Oxford had played host to the first public rebuff to creationism.

Nowadays many view Cambridge as the university for science, and Oxford as the university for the humanities. After all, Cambridge has 83 Nobel laureates of Medicine, Chemistry and Physics, to Oxford’s 32. But if you look further back in time, you’ll see just how incredibly important and influential the events that unfolded, just some of which are covered here, in Oxford have had on the scientific world.

Is bacon off the menu? – Reviewing WHO’s Verdict

Reading from the wrong corner