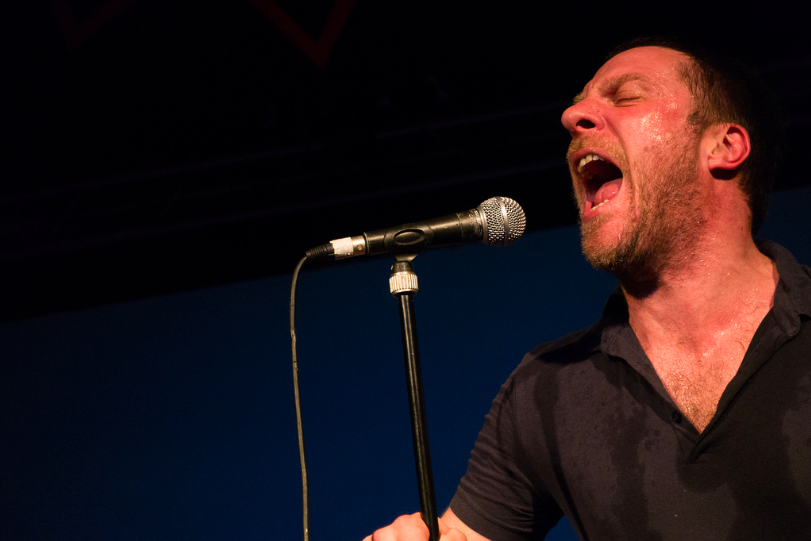 We’re all living in it. Or some did. Here.

Eton Alive, the newest album from Sleaford Mods, is a fearful listen. Not least because in it we hear the lacerations that constitute a musical evolution. This is the least ‘Sleaford Mods’ album yet, and for exactly that reason it succeeds in demonstrating a band autonomously undermining their previous reputation, undermining the targets of their previous work by realising their ambitions in a sincerest parody that layers Jason Williamson’s expected obloquy with a genuine musical expansiveness. As English pop settles for depicting vacuity by flaunting its possessed vacuity – when the only genuine praise afforded to sundry wordy sycophants is that they manifest the aridity of the worlds they seek to satirise so easily, it only acts to affirm that the Nottingham duo are the essential representatives of their epoch’s emotions.

The album is no continuation, rather a conclusion that plausibly includes some birthing. O.B.C.T is a track demonstrative of the pair’s development. As throughout much of the album, little electronic bleeps, the jingle of an iPhone alarm or the drone of bus stopping, form the foundation of the instrumental. The drums are less processed. The bass has a cavernous vitality that sounds unlike anything Andrew Fearn has produced previously. These lively recapitulations intertwine with the technological overspill, a collision that mirrors a band attempting to conserve their actuality under the corrosive force of increased publicity. ‘You know I just fantasise – In a house three times the size of my old one. And I pretend that it don’t matter – passed Oliver Bonas in the Chelsea tractor.’ croons Williamson, equally humiliated and spiteful.

The profits of music have eventually paid off, we imagine. Williamson is not beyond enlarging himself to project his fears of consumption. When the chorus comes and the frontman teases ‘You can’t be splashing, you got no things / You’re getting salty, you ain’t a fish’ he has advanced himself into the position of his previous animosity, willing to occupy the role of tormentor to evidence the austere mastery perpetual in this country. Williamson as parodic emblem of the escaped, the newly-prosperous, elucidates an antagonism and a material bondage that is perpetually clear, just oft unspoken.

The following track When You Come Up To Me shows Williamson’s willingness to experiment vocally and personally. The song is almost entirely sung in key not unlike some botched New Romantic formula. The music has a dexterity and progression, involving multiple samples, vocal tracks and the plodding rhythm section that expected of Mods, but here bending and changing as the tune moves forward. Disorientating and especially cinematic are the lines ‘If you don’t want him to question you / Lay him on his side, don’t freak while / eyes roll back to the bone and the mouth is blue’. The mortifying subject rings of Williamson visualising his own demise, possibly a fatal consolation to the ubiquitous inquisitions that land on a band newly established as cultural documents.

‘Firewall’ too employs their newly discovered mode. The chorus limps through a therapeutic threat – there is an equal recession and concession in the lyrics – ‘It’s not something you need to do / You’re getting older / You’re getting slower to the point where you’re no use’ betrays a concern with automation, with a fatal absence of industry. This new choice of delivery feels like Williamson packaging himself as both parodic and futurist. The movement away from sprechgesang admits a kinship with those patrons of English music keen to repeat tracks that were magical and escapist some thirty years ago, partaking in a tonal hospice of lost influence. They are futurist because while many of Mods’ contemporaries exult in militarising their angst as something revitalising and youthful, there is the sentiment carried in this fascination with mortality that as the violence of youth is marketed once anew, the reality of such missing youth is a music and an activity nought more than cadaverous.

On ‘Flipside’ we hear a pulsating footwork-inspired beat that careens into fragmentation. Flipside recalls most the sort of single that would’ve lead off an album like Divide and Exit. Here its overture is the purgatorial chime of something like a taxi-door opening. What is ingenious is the intoxicating pace of the song and its collapsing conclusion. Williamson and Fearn compete in speed and fury. As Williamson repetitiously demands ‘because of what?’ at the song’s close, the instrumental stutters, loses its former tenacity and stumbles into the silence that produces the following tune, Subtraction, a blackly comic depiction of a people so victimised by anxieties, by comparative incapacities and inferiorities, that we are desperate only to own our own starvation, to retain a freedom in the very disintegration of our anatomy and our agency.

A change of perspective lifts the album over the duo’s previous outings. Whereas until now, Mods were easily caricatured and fairly upbraided as mired in only Williamson’s vocal excoriations. After four albums, the limits of insight afforded by reliance merely on the frontman’s opinions, insults and sometime pellucid truths, might demonstrate an absence of artistic invention, of having comfortably plateaued. Yet on Eton Alive Williamson is far less concerned with himself than ever before. His person and perspective is amorphous.

Discourse beginnings with a send-up of hooliganism, mob psychology, but unlike a previous Mods record, is willing to impress fragile experiences of those enveloped in such groups – the speaker not merely mocks the lying subject of the song, but presents their pains and punishments. Williamson is not content to mock but to occupy, an honest act of impersonation. This is best done on Top it Up, containing a line so immediate and trenchant that a lings long after the second side is spun. Centring the song about a wake, we hear ‘two lines on the table at a fucking funeral / for somebody who got sick of two lines on the table’ which in the hopeless yell of the vocalist is so certainly mortal that it touches the very spine of our silent dependencies.

The band before had never ceased to locate a blackly comic victory in scenes of snorts and sniffs. The band had not before laid those subjects so bare, so vulnerably ironic. I Feel So Wrong, the closer of Mods’ last full-length release, left us with ‘The look is high flexed winged I knew it was gunna be / A plunging death of everything the death of harmony’ – an emotional overture, this rambling and inventive new work resuscitates itself, a zombified interrogation of what is left after the band’s previously apocalyptic conclusion. Lines, zombies, the gormandising gaping wound of institutional disregard for numerical lives eaten in the wake of no birthright, no patrimony. Sleaford Mods are necromancers capable of enlivening the endless sum of invisible servitude. They were always urgent. They were never a novelty. Sleaford Mods are now a native emergency.