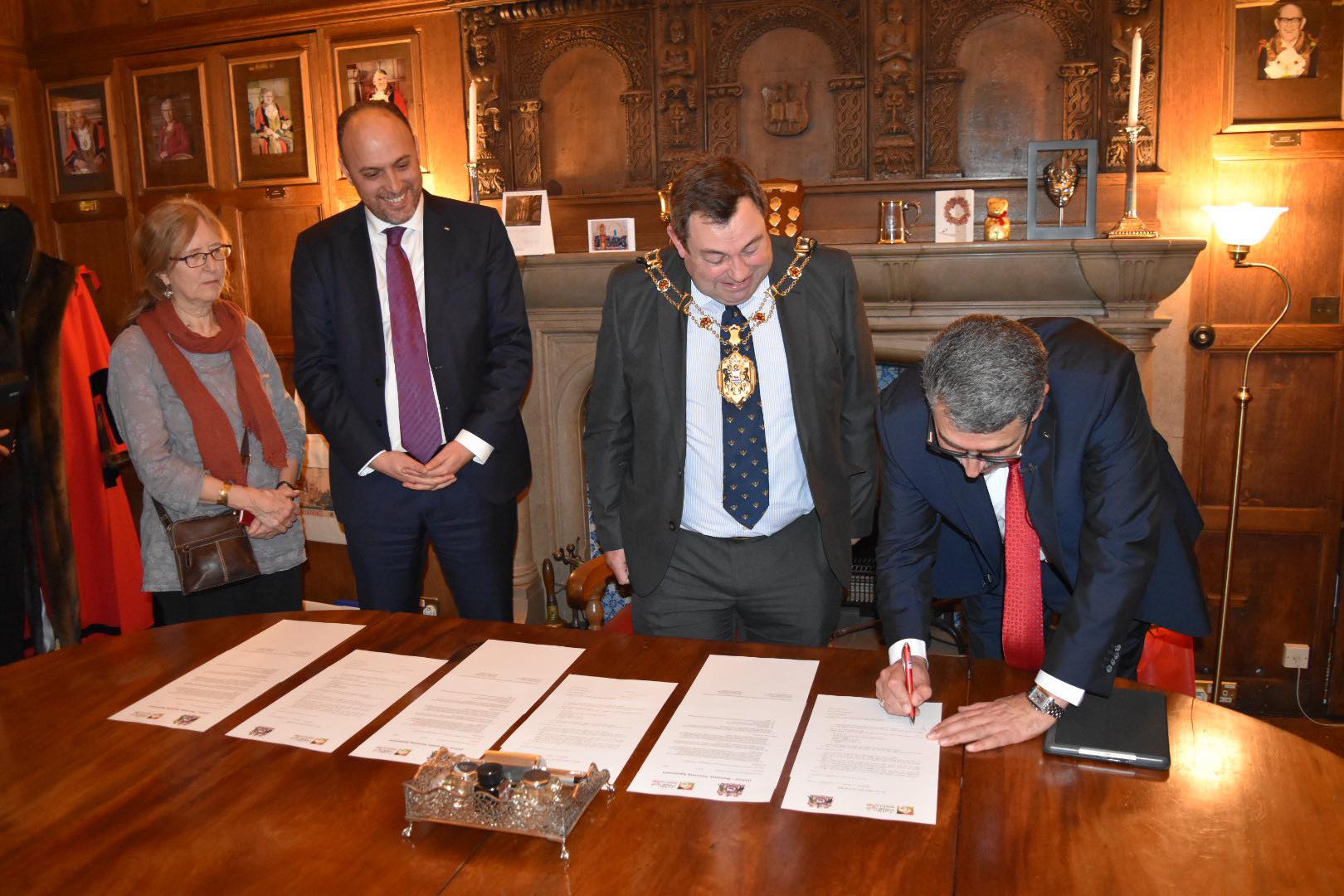 Yesterday, the Lord Mayor of Oxford and the Mayor of Ramallah signed the Twinning Agreement between Oxford and Ramallah, Palestine.

The signing is the culmination of a 15 year friendship between the two cities, lead by the Oxford-Ramallah Friendship Association and the Oxford City Council. The move was initiated in July last year, after which a memorandum was signed in December.

City twinning is an act of city diplomacy which aims to give citizens the chance to engage with their respective cultures, and foster friendship, understanding and networks. Nikki Marriott, secretary of the Association, said: “Our friendship links with Ramallah have helped to share cultural understanding through video, dance, youth and women’s visits.”

The Lord Mayor of Oxford, Councillor Colin Cook, said of the agreement, “The signing of this agreement marks a new phase in our relationship and I wish it every success in the future.”

Ramallah is a Palestinian city located in central Palestine, 16 km North of Jerusalem. As the seat of the Government of the State of Palestine, it is a base for many NGOs, diplomatic representations, companies and banks.

During his address, the Mayor of Ramallah, Mr Mousa Hadid, alluded to some of the challenges Ramallah currently faces. He resolved that, “Through signing this agreement, we confirm that together we can make a difference”. An associate added, “Ramallah is lucky to have Oxford, but equally, Oxford is very lucky to have Ramallah. It is historic for both cities in every sense.”

Gifts were exchanged as part of the proceedings. Councillor Colin Cook presented Mr Mousa Hadid with a print of The Queen’s College. Mr Hadid then reciprocated with a first edition book about Ramallah and a woven tapestry.

The agreement has been received well by Oxford’s Palestinian community. The Oxford Students’ Palestinian Society said to The Oxford Student: “We are delighted that Oxford has formally twinned with Ramallah. For the last 15 years the people of Oxford have built enduring links with Ramallah through the Oxford Ramallah Friendship Association and over 600 Oxford residents signed a petition supporting the council’s decision. We have seen once again that the majority of this city stands with the Palestinian people in their struggle for liberation, self-determination and return.”

Osaid Alser, a Palestinian raised in the Gaza Strip and a student of Musculoskeletal Sciences at Green Templeton College, similarly said: “For me as a Palestinian refugee, [this is] an absolutely wonderful achievement for both cities”. He went on to say: “I hope that this twinning agreement will involve implementing more projects on the ground in both Ramallah and Oxford city. In particular, I hope to see more focus on the refugees who are living in neighbourhoods of Ramallah”.