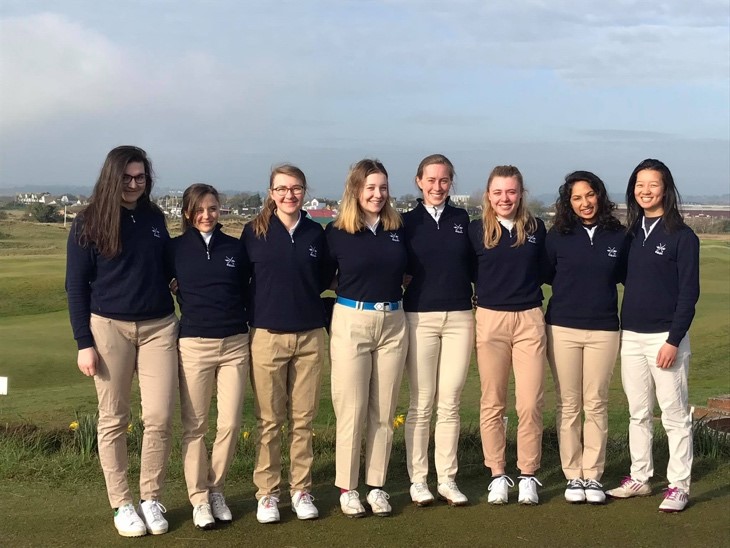 Last week, golfers descended upon Camber, East Sussex to face down Cambridge. Rye golf course, the original home of the Varsity match, rose to expectations as a test of verve, endurance, and skill that one could hope to enjoy from a fine Harry Colt designed links course.

Come lunchtime on Tuesday 19th March, Oxford had obtained a single point after three closely fought foursomes matches. Cambridge seemed to be on their way to a 7th successive win. During the clubhouse lunch of sandwiches, players were quiet in anticipation of the upcoming singles matches. Captain Alice Watson (St. John’s) opened the singles matches, pitted once again, against Cambridge’s captain, Rachel Naylor.

Following a slow start in the morning foursomes, the afternoon singles matches held a great surprise in store. Oxford Ladies trounced Cambridge when all six players won their matches. Maybe the clubhouse lunch wasn’t so lacking after all. Nevertheless, the 6-0 singles result does not reflect how closely contested some of the individual matches were.

The resounding 7-2 victory is a testament to the team’s dedication to training since the beginning of the season, with coaching from David Cook of Oxford Golf Centre. With all but two team members having joined this year, the entirely single figure handicapped team was tasked with the demanding feat of ending Cambridge’s winning streak.

The presentation dinner at Hope and Anchor that evening was a wonderful way to cap off a thoroughly enjoyable season that featured fixtures at some of the best courses in the country, including Sunningdale, Woking, The Berkshire, amongst others.

May this year’s Varsity success be a sign of more to come from Oxford University Ladies Golf Club.

On Wednesday 20th March, the Oxford Divots took on the Cambridge Stymies at Royal Cinque Ports GC, Deal. The Cambridge team modelled a bold outfit: blue cords, pink jumper, white trilby hat. Oxford were far less adventurous, but a lot more professional: a dark blue quarter zip and navy trousers. The Divots boasted a 10-man team of rookies, including a reserve player stepping in when Sean Martin (Jesus) was forced, begrudgingly (to see the birth of his first born), to stay in Oxford.

The foursomes matches began with a superb opening drive by The Divots’ Welsh Wizard, Sam Hitchcock, which was to set the tone for the rest of the day. The first 2 points were secured for Oxford almost simultaneously, as the captain Lee Priest (Christ Church) and Ollie Lowe (Jesus) finished up on the 13th hole, shortly followed by Sam Sawyers (St Edmund Hall) and Sam Hitchcock (Keble) sealing their victory on 16. Some good golf and nerveless putts in groups 3 and 4 saw Cambridge tie things at 2-2, before Jack Palmer (LMH) and Tom Burgess (Trinity) brought home the final point up for grabs. The match was finely poised at lunch, Divots 3, Stymies 2.

Sandwiches at lunch allowed deliberation over the afternoon singles playing order, which was led out by the captains of each side. The afternoon saw the Oxford Blues caddying for the Divots, offering some vital support throughout the match.

As progress continued, news was travelling via spectators that Oxford were up in 8 of the 10 matches on the course. The Divots were eventually victors in each of these 8 matches, most notably a win on the 12th hole for Ross Perry (St Edmund Hall), a long putt drained to clinch it on 18 by Arthur Thomson (Oriel) and a miraculously struck pitch from Tom that span to 4 feet in front of the onlookers. The 2 matches remaining both came down to the 18th. The gathering crowd were witness to a steady putt by Nick Wells (St Catherine’s) to gain a half point, and an unlucky break for Josh Forshaw (Queen’s) saw his opponent’s ball hopping out of the water hazard. Josh was left with a nervy putt for the half, which he deservedly rolled in. Oxford had gone unbeaten in all 10 singles matches to secure a 9-1 margin, an overall 12-3 victory.

A lovely meal at Royal Cinque Ports GC and a trip to the Deal Olympic and Athletic Club followed for the night’s celebrations and to wrap up a fantastic performance by all.

In 2018, a strong Cambridge side defeated Oxford University Golf club in the Varsity Match for the first time in 9 years. This left the dark blues deflated and hungry for revenge.

The broken pieces were handed over to Harry Fitzpatrick, who was determined to get OUGC back to winning ways in his captaincy year. Many training sessions and weekend fixtures followed, all leading up to the 130th Varsity Match, which would be returning to Rye Golf Club for the first time since 2014.

Rye was in tremendous conditions throughout the week; the greens were true, the wind was calm and the East Sussex sun shone through the grey clouds. The blues Varsity match kicked off with the reserves game, more commonly known as the dinner match. A lot of money was on the line; the losing team would pay for dinner, equating to about 60 pounds per head. This was more than a simple 5 pound football bet on William Hill.

Lucas Moore and James Sully achieved a tight 2-1 victory over the tabs, with Sully bringing in the winning point with a 3&2 win in his singles match.

Rye was in tremendous conditions throughout the week; the greens were true, the wind was calm and the East Sussex sun shone through the grey clouds.

The team morale was over the roof and the 10 blues were eager to get going with their foursomes matches on the next morning. The Fitzpatrick brothers went off top and intimidated the tabs with their length of the tee, sealing a 3&2 victory. Rietschel and Cooper came in with a clutch finish, with the German Golfing god stiffing his approach shots on holes 16 and 17 to seal a 2&1 victory. Howlett and Jenks won by the greatest margin of 11&10, and Frey and Giddins closed the book from anchor to seal a fourth point. Barker and Springett were defeated by a strong tab pairing. The highlight of that match was Ed ‘Sponge’ Springett holing out from 180 yards on the Par 4 11th.

On Friday night, all players attended the cocktail party, where the singles order was read out. Cambridge began the mind games with a bin player up top. Nevertheless, OUGC were ready to face any sort of opposition. The Saturday singles also saw the return of a few familiar faces in the form of caddies. The old boys did a tremendous job on the bags, helping OUGC towards a 5.5 – 4.5 victory in the singles, achieving an overall win of 9.5 – 5.5.

Only one match was halved during the weekend; Will Howlett and light blue Joe Chandler had an extremely close fight all the way to the 36th green where they decided to shake hands for a friendly half. Wins in the singles came from Bruce Fitzpatrick, who faced CUGC’s top player Scott Jeen, as well as from Karl Frey, Carl Rietschel, Monty Cooper and Rory Giddins.

The evening was wrapped up at the Hope & Anchor hotel in Rye with a wonderful dinner alongside the Cambridge boys; that’s friendly competitive golf at its best.

It was a strong display of competitive golf and team spirit from all of Oxford’s golfers, to avenge last year’s losses. Onwards to the next Varsity match!