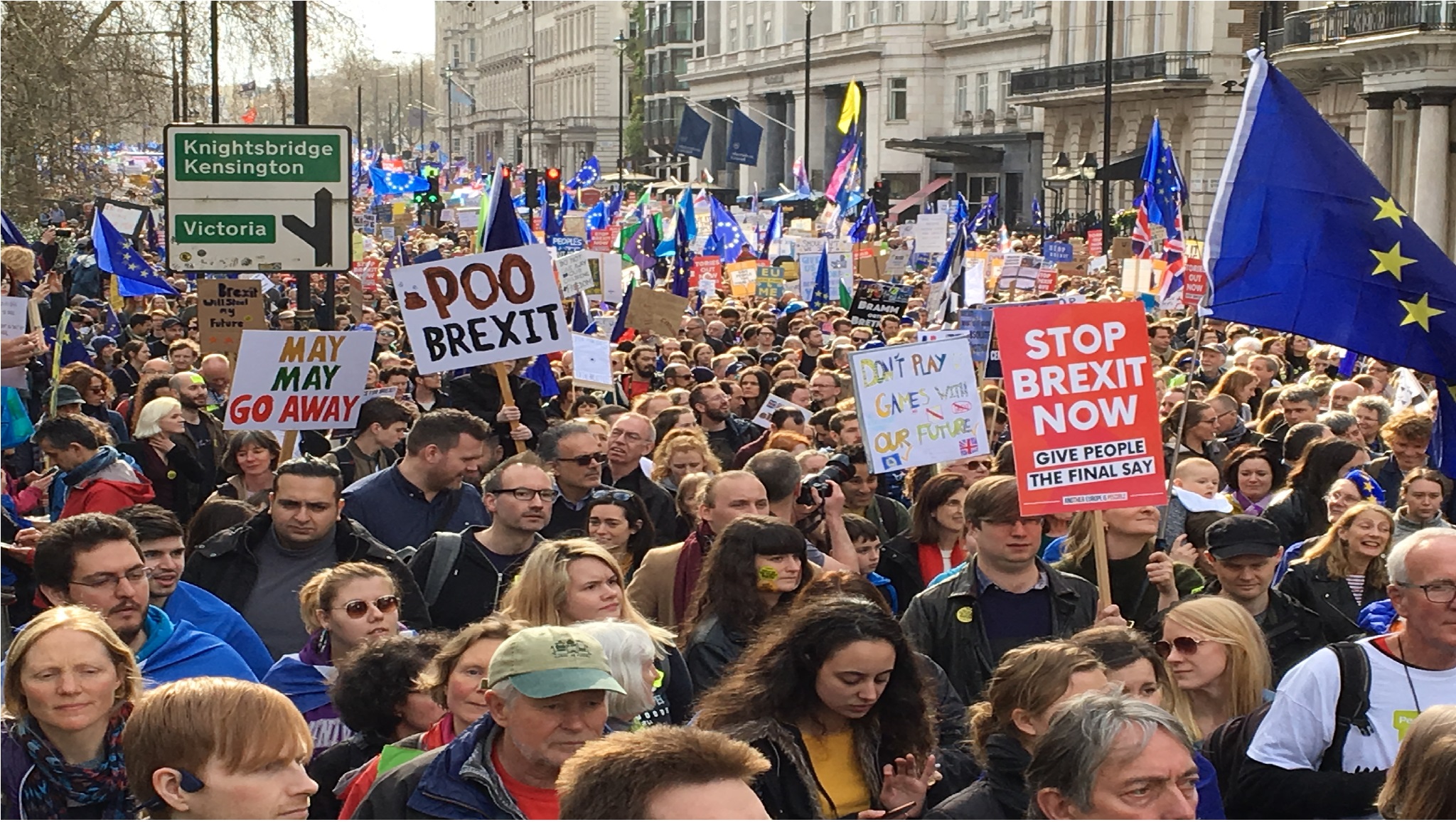 Image Description: Protesters demand a second referendum on Brexit in the People’s March in London, 23 March 2019

With the continued failure of government to deliver upon the 2016 referendum result and the rigid division of Parliament inhibiting any proposed deal, a second ‘People’s Vote’ has become ever-more attractive to many. After all, if our elected parliamentarians are so inept – as they have proven themselves to be – why not allow the British public to ratify any proposed Brexit deal, or perhaps go further and even call the entire thing off?

While previously the People’s Vote movement was a relatively minor one, the whipping of Corbyn into supporting a second referendum has increased the likelihood that such a referendum shall take place. It may even secure a long-term postponement of Britain’s leaving the EU, as it provides Tusk, Junker and other European politicians the attractive outcome of Britain remaining in the European Union after all. So, we cannot simply write off a second referendum – it is now a major possibility and it must be assessed with rigour.

Thus far, much of the debate concerning a second referendum has centred around its democratic nature – Europhiles assert that given new information related to the Brexit process and likely outcomes, it is correct that the British people should be granted a renewed say on this monumental decision. In contrast, Eurosceptics argue that such a referendum would entirely undermine the decision made by the British people back in 2016. On my part, I shan’t sail into this debate, largely because far more eloquent voices are available should one seek them out. The only warranted mention I shall make relates to the alteration in our constitution, should such a referendum be held. While it is correct that referendums are not legally binding, much of our political framework is formed of convention. Not a single referendum in British history has ever been circumvented by Parliament, and to the best of my knowledge, a second referendum on an issue has never been held so close to the previous one.

This is not to say that a second referendum would be undemocratic, or even that the constitutional price is not one worth paying; it is merely to illuminate the fact that if a second referendum were held it would mark a drastic departure from previous conventional practice, potentially opening up the possibility of second referendums on many an issue or granting Parliament the capacity to overturn referenda in the future. Perhaps this is indeed a price worth paying to secure our membership in the European Union, but it is a price one must acknowledge.

This is not my main concern. Rather, I wish to argue that those who desire to see a left-wing government in the near future are obligated to oppose a second referendum. In my mind, to support a second referendum is to put in serious jeopardy the chance of the election of a Labour government in the near future. Given the disastrous policies of the Conservative Party, which have wreaked havoc upon so many people and communities, losing the possibility of a future left wing government is indeed a price we should not pay.

To support a second referendum is to put in serious jeopardy the chance of the election of a Labour government in the near future.

Around 60% of Labour constituencies voted to leave back in 2016. Many core Labour targets for the next election, such as Mansfield, Watford and Corby, also voted to leave. By supporting a second referendum, Labour risks alienating a large proportion of voters in such constituencies, who may either fail to vote, vote for a pro-leave Conservative candidate or perhaps look towards third parties to redress their grievances. Given the closeness of many Labour target seats, it is a relatively unobjectionable stance to say that Labour is very unlikely to win such constituencies, should they detract from the wishes of the local electorates.

This is a simple, oft-said statement, but one which nonetheless carries significant weight. If anything, the last three years have shown the deep divisions present throughout Britain and even the most optimistic polling data suggests a change of opinion of only several percentage points – well within the margin of error.

To assert that Labour could nonetheless win a General Election despite alienating so many leave voters is to be remarkably obtuse. Brexit has completely monopolised public broadcasting and the country’s interest, subjugating all other issues to the side-line in the process. Thus, while Labour is far better placed to appeal to voters on issues such as Universal Credit, rampant homelessness, complete economic stagnation throughout the North and Midlands, drastic rates of knife crime in urban centres, we cannot expect a General Election at this moment to centre around such issues. Instead, an election would inevitably consist of successive Tory campaigns branding Labour as a voice for Remain, sweeping up votes in leave constituencies and likely causing many already estranged Labour voters to stay home or vote for an alternative party.

Furthermore, the holding of a second referendum would ensure the continuation of Brexit’s monopoly on interest for years to come; are we to think that upon a decision to remain in the European Union, millions of leave voters shall go gently into the night? Of course not – instead, the viciousness of this issue will be further engrained, resulting in Eurosceptics abandoning the Labour Party, perhaps even for an entire generation.

It is this long-term damage I am most concerned by. Support for a second referendum would – I am convinced – guarantee Labour losses in marginal constituencies, but it would also once again damage Labour heartlands. After years of austerity, gradual partisan estrangement and general bleak pessimism, the revocation of Article 50 would serve to alienate voters in the North East, South Yorkshire, Greater Manchester and other previously reliable Labour areas. As a northerner myself, I truly worry about the continued abandonment of communities such as my own, at risk of feeling that no party truly represents their interests.

I have no interest in discrediting the character of left-wing remainers. While personally an ardent Brexiteer, recently swayed by soft Brexit options, the revelation that leaving the European Union shall further economically harm our most disparate communities naturally compels one to oppose Brexit. At the same time, I ask such a reader to seriously weigh up this cost against the cost of another Tory government; a cost which would almost certainly result.

Are we to think that upon a decision to remain in the European Union, millions of leave voters shall go gently into the night?

Yet, perhaps pessimism related to Brexit is justified. Corbyn’s continued attempt to distance himself both from Brexiteers and Remainers indicates the Labour leadership’s astute awareness that taking a definitive stance will cost them votes. Indeed, this goes both ways – I am under no illusion that middle-class remainers may jump ship to the Liberal Democrats, as perhaps may ethnic minority communities concerned with the rise in racism and xenophobia. Thus, at this point perhaps it is too late for Labour to comfortably win the next General Election, destined to alienate either traditional Labour communities in the North and Midlands, or ethnic minorities and university-educated communities in urban centres and the South. For this reason, I hold out the view that Labour is best placed supporting a soft Brexit – perhaps the proposal offered by Kenneth Clarke could attract moderate Conservatives into supporting a deal, though even this is sceptical.

Nevertheless, Labour simply cannot afford to alienate such an integral part of its support-base. Alienation as such would both prevent Labour from winning the next general election (in all likelihood securing another Conservative government) and further sow cracks in communities already reeling from testing years at the hands of May and her cronies. Perhaps Britain’s membership in the EU is worth all this – I think it is not.