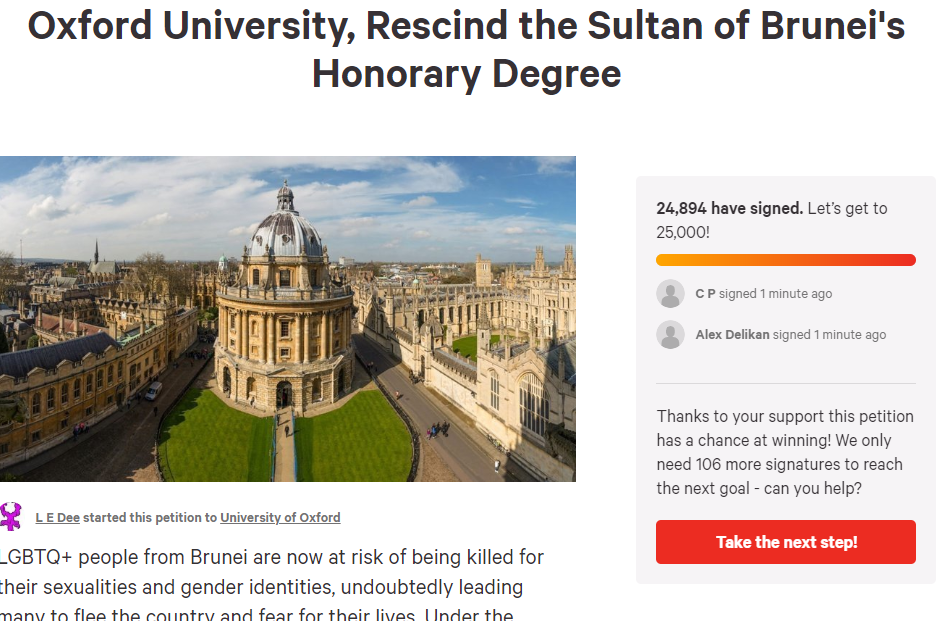 A petition to remove the honorary degree from Sultan of Brunei, Hassanal Bolkiah, has received nearly 25,000 signatures at the time of writing.

The petition has been up for only a day, but has received a huge amount of support, with students across the University supporting the petition.

“Through refusing to rescind the Sultan’s Honorary Degree, the University of Oxford indicates that it is content for its name to be tied to human rights abuses and the persecution of LGBTQ+ people. As a world-renowned institution, the University should not be linked such legislation and must take a clear stance in opposition to the Sultan’s actions.

“It is not enough to simply support “international condemnation” of Brunei’s new penal code and “back the United Nation’s call to stop the code entering into force”, as this requires no action by the University itself.

“It is time for the University to take responsibility for its links to governments which oppose basic human rights and freedoms. It is time that the University recognise that its refusal to take concrete action makes LGBTQ+ students and staff members feel that their institution will never prioritise their rights on a global scale.

“We therefore call on the University of Oxford to rescind the Honorary Degree of Civil Law by diploma conferred on Sultan Hassanal Bolkiah in 1993, as a statement of support for LGBTQ+ people worldwide.”

Oxford University Labour Club has shared the petition, along with a statement from the LGBTQ+ Officer, Tessa Jowitt.

The statement reads: “OULC is extremely disheartened by the horrific new laws being put into place in Brunei. This violation of basic human rights in favour of strict theocratic laws is a worrying sign for human progress across the globe, and we continue to be dedicated to secular principles alongside freedom of religion.

“Because of this, we implore the University of Oxford to revoke the honorary degree given to the Sultan of Brunei, to make clear that such regressive practices are not tolerable. We remain committed to both welcoming all members of the LGBTQ+ community, as well as fighting for rights in the wider community.”

This comes following a call from Oxford SU to rescind the degree from the Sultan.

The petition can be found here.