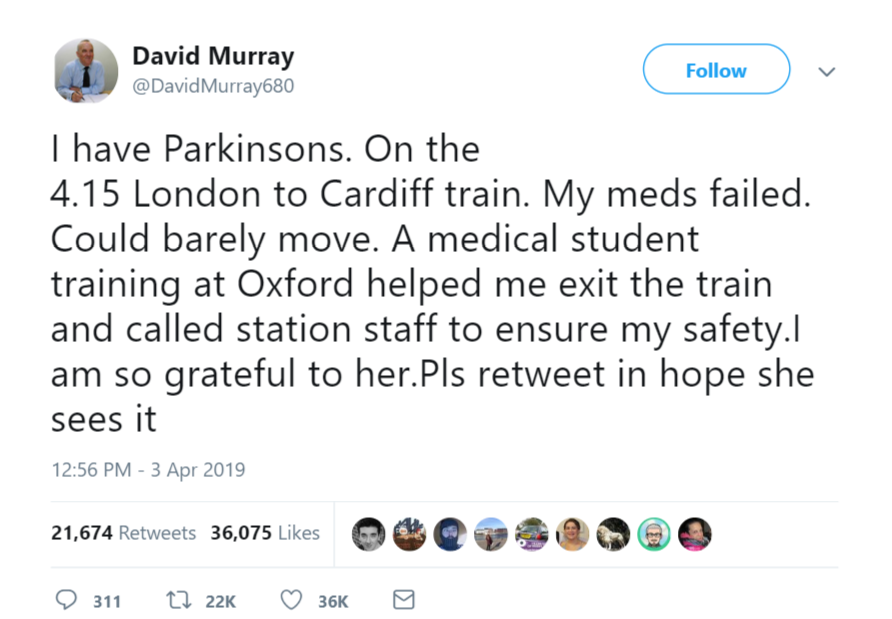 David Murray, Patient Advocate and Trustee of the Cure Parkinsons Trust, has taken to Twitter to share a story about an Oxford medical student who last Thursday, 28th March helped him safely get off a train after his medications for Parkinson’s disease had failed.

He tweeted early this morning: “I have Parkinsons. On the 4:15 London to Cardiff train. My meds failed. Could barely move. A medical student training at Oxford helped me exit the train and called station staff to ensure my safety. I am so grateful to her. Pls retweet in hope she sees it.”

The tweet has received an overwhelmingly positive response with 18,000 retweets and 29,300 likes; many evinced hope that the student is found. Some expressed concern at the lack of guards on the trains, calling for a disabilities campaign on the issue. Most were simply appreciative of the positive story of ‘human kindness’, generating similar stories about Parkinsons disease. In one reply, David Murray stated: “Not only does it restore your faith in human nature but also contradicts some of the unwanted labels attached to younger people”

A response to the tweet from Oxford University reads: “Hi David, We’re so glad she stopped to help and hope you are feeling better. We’ll put our feelers out and see if we can track her down!”

The Medical Sciences department of Oxford University likewise replied: “We are so pleased that one of our students was able to help! We have shared your tweet and hope that they see it.”