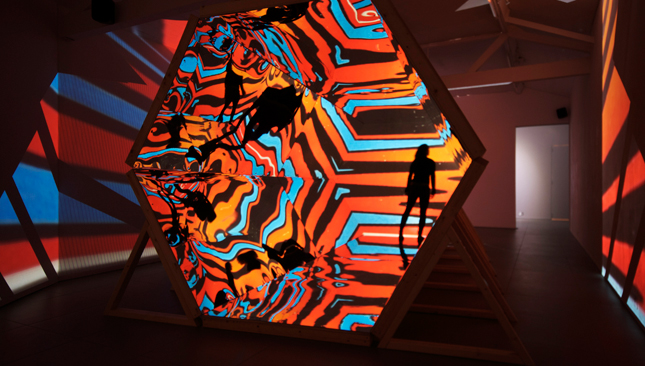 The kaleidoscope. It was a personal favourite in my childhood toy arsenal. Forget the lego and the Barbies, I wanted that battered metal tube and all the psychedelic glory it contained. Fast forward a decade or so, and I see an advertisement for the KALEIDOSCOPE exhibition at the Saatchi Gallery. I instantly wanted in.

This exhibition, featuring the work of nine international contemporary artists, focuses on the distortion of human perception. It promises provocative and mind-bending contemporary art, for which I had high hopes before I visited. But KALEIDOSCOPE isn’t nearly so experimental as its name suggests, and lacks the necessary cohesion to pack a real punch.

The first gallery provides the most rousing work of the exhibition – Laura Buckley’s giant, human-scaled kaleidoscope, Fata Morgana. Slip off your shoes and tentatively step inside the mirrored cave; immerse yourself in a world of synthetic sounds, human voices and the constantly shifting images projected on the kaleidoscope’s interior. Buckley’s installation is the most literal manifestation of the exhibition’s theme and it is immediately engaging. It does feel, however, a bit of an Instagram ploy. You have to pay £2 to walk inside it and, if you’re going to get your money’s worth, you’ll pose to capture a funky silhouette against the hallucinatory backdrop or a selfie in one of the mirrored walls. Much to my dismay, this is what most people were doing when I visited, and the immersive element of the installation was totally overlooked. This is somewhat inevitable, though, given that the gallery markets itself online as ‘one of the world’s best museums on social media’. Fata Morgana speaks out to the Instagram aesthetes, one feels.

It is difficult to engage with the exhibition thereafter, since each of the following works is dwarfed by the opening installation. Dramatic nautical vistas by Whitney Bedford and photographic observations of waves in Pierre Carreau’s AquaViva series are compelling in their own rights, but wallflowers in comparison to Buckley. So too they demonstrate no apparent relation to the ‘kaleidoscope’ topic. Tom Howse’s domestic settings in the next gallery along are even more difficult to locate within this theme, quaint and illustrative though his paintings are. (A personal favourite is his smiling teapot.) 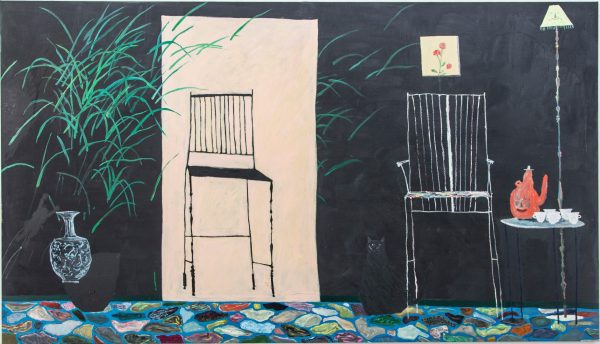 An odd contraption on the floor of the fourth gallery appears especially redundant upon first glance, but this is, in my view, the secret star of the show. ‘Dog Sled’, by Mia Feuer, is a model constructed from petroleum waste and tar paper collected from the Arctic Sea. Resembling something between a traditional dog-pulled sledge and a modern snowmobile, Feuer’s work is explicitly linked with the post-natural world, emphasising man’s impact on the environment. Having been built in and then removed from the Arctic, ‘Dog Sled’ has sagged as its constituent pieces have variously thawed. Bits of coloured rope, frayed and twisted around the sled, are a particularly poignant reminder of how manmade synthetic materials have invaded the natural world. Don’t ask me to explain why this is in the KALEIDOSCOPE exhibition, though. This piece neither threatens to distort one’s perception nor comes close to the aesthetic vibrancy of the opening installation. But severely misplaced though it is, it is quietly profound.

Only in the final gallery does the exhibition seem to recall the brief it so confidently sets out to fulfil. Tillman Kaiser’s mixed media drawings focus on symmetry, collage and repetition. Sharp, geometric structures – resembling metal but in reality made from cardboard – jut out from the gallery floor, while dark shapes wrestle their way into his paintings, making for a striking visual experience. It is gratifying to see the exhibition come full circle, although at the same time it rather feels as though it has never left its starting blocks. 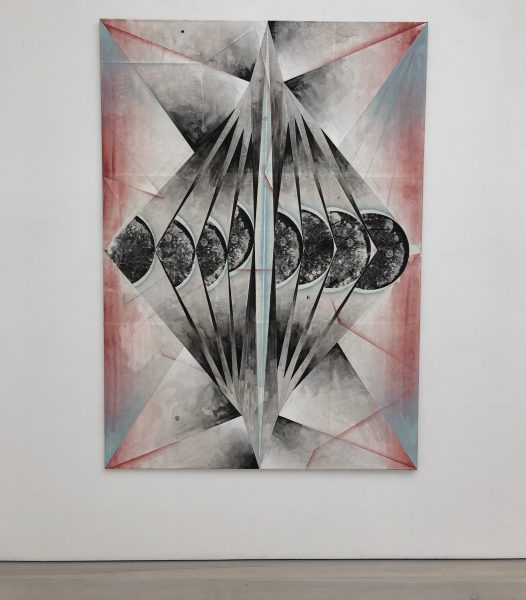 This exhibition does a good job in distorting one’s perceptions, but not in a good way. I came out of the Saatchi feeling perplexed as to why these pieces had been placed together, as if I had wandered in and out of two or three entirely different exhibitions by accident. Buckley’s installation sets a precedent that just can’t be matched by the paintings that dominate the rest of the exhibition. If you’re looking for kaleidoscopic art, you won’t find it here. That said, there are a few mesmerising pieces that are to be seriously considered, even if they do look as though they belong somewhere else. So, go for them. It’ll be worth your while.

‘Kaleidoscope’ runs until 5 May at the Saatchi Gallery.

An egg that’s not just for Easter