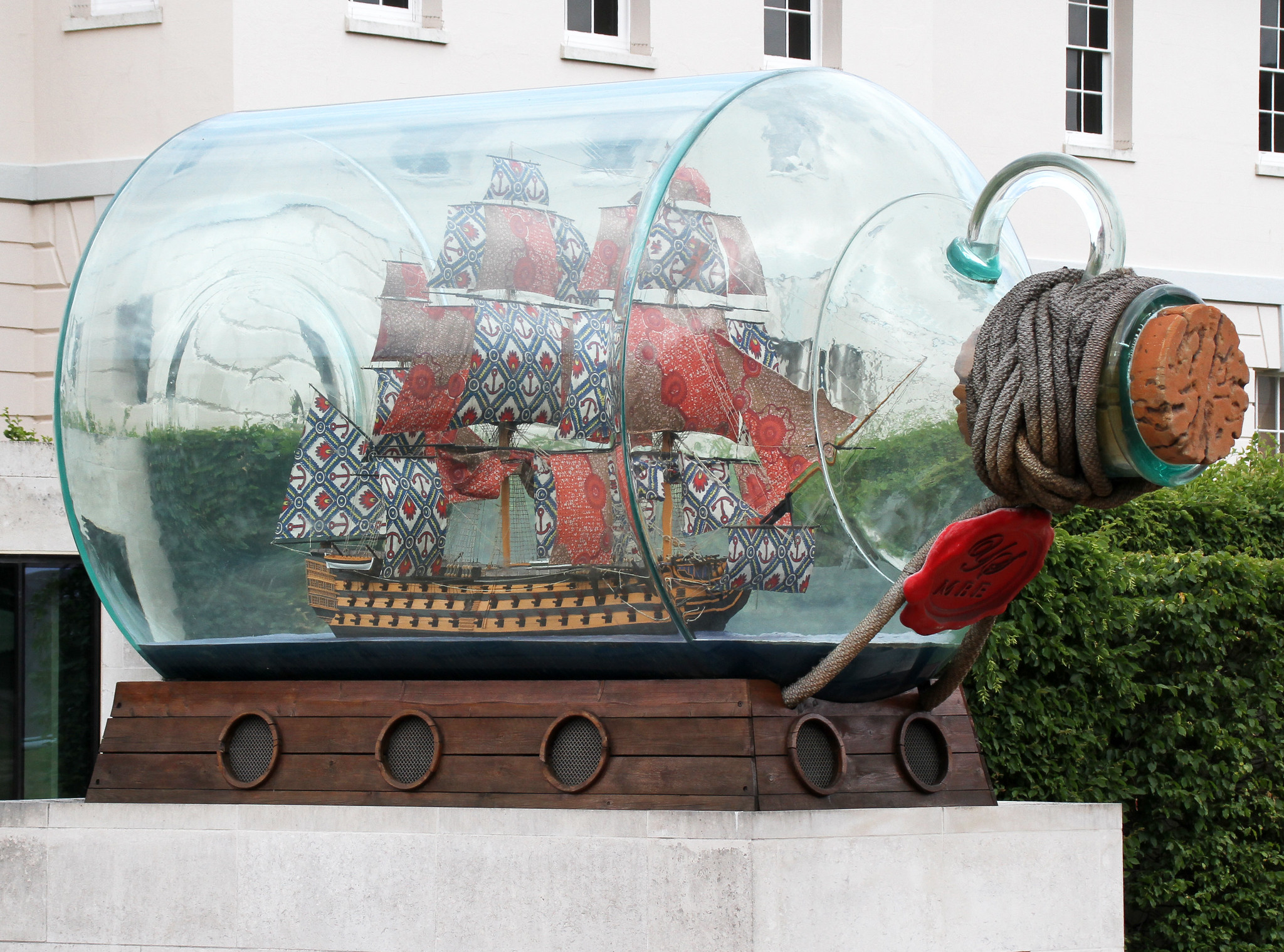 The Fourth Plinth in Trafalgar Square has played host to many different artworks, from a large blue cockerel to a marble torso-bust of Alison Lapper. However, only one of the pieces that have graced the plinth has paid respects to the historical symbolism of Trafalgar Square, and in particular to Nelson’s Column itself.

Yinka Shonibare’s ‘Nelson’s Ship in a Bottle’, which occupied the plinth from 2010-12, displayed a replica of the HMS Victory held inside a large glass bottle. Strikingly, all the sails were made out of Dutch wax textile, a fabric which exhibits a typically African, colourful, pattern. It is worth noting, however, that the fabric is not in fact African at all. Rather it is the result of a conglomeration of several different cultures: it is Indonesian influenced, produced by the Dutch to be sold to an African market, and yet is bought by Shonibare in Brixton. Shonibare explains the personal significance of the material by stating, “I like the fact that something seen as being African is actually the product of quite complex cultural relationships.”

“…This island is just not big enough to create parallel universes of people. We have to be interdependent.”

This Dutch wax textile is present across almost all of Shonibare’s work, reflecting not only his own multiculturalism as an Anglo-Nigerian artist, but that of London itself. Shonibare argues that “this island is just not big enough to create parallel universes of people. We have to be interdependent.” This focus on the construction of identity is at the centre of all of his art, continually questioning our assumptions concerning race, class, and our definitions of self.

Shonibare’s own process of creating art prompts us to question our definition of an artist. As the result of transverse myelitis which resulted in paralysis of one side of his body, Shonibare is unable to execute his own artistic work. Instead, he employs a team of assistants who help him to bring his visions to life. Some would argue that this takes away from his credit as an artist but, as he states himself, allowing his artistry to be restricted by his physicality would be like ‘an architect choosing to build only what could be physically built by hand’. Whilst Shonibare does much to help the disabled community, he has refused to allow it to be at the centre of his art or to restrict the extent of his creativity. In fact, in the biography on his own website, his disability is not even mentioned. Rather, he prefers for his artwork to speak for itself – it is powerful and provocative without leaning upon his physical condition as his subject matter.

One of Shonibare’s pieces, ‘Gallantry and Criminal Conversation’, provoked and sparked much debate when it was first commissioned, and is still doing so seventeen years later. The installation features a horse-drawn carriage hanging over four sets of figures, each performing a different sexual act over trunks. The piece is inspired by the Grand Tour, a supposedly educational and cultural trip that young aristocrats would have taken across Europe in the 17th and 18th century. The title of the piece highlights the covert sexuality that the artwork displays, with ‘criminal conversation’ being a euphemistic term for adultery at the time. Each figure in the installation is swathed in Shonibare’s Dutch wax textile, where the bold colours add to the unapologetic sexuality of the piece and the history of the material reflects that our first impressions are always to be questioned. Shonibare’s piece evokes the feeling that we are being exposed to the truth behind glamour. The sexual depravity contrasts with the decadence and formality of the carriage and the style of dress of the figures to demonstrate the blurred lines between public and private life, as well as confronting our assumptions about class at that time.

The use of Shonibare’s fabric is equally evocative in his piece ‘Vacation’, which shows a nuclear family of astronauts on an interplanetary holiday. A superficial glance at the piece would suggest that it is simply a celebration of human progress in the field of space exploration. However, each of the spacesuits that the figures wear are crafted out of brightly-coloured Dutch wax textile. Here, the African design of the fabric pushes us to consider the undeveloped and impoverished African continent and hold it in sharp contrast to the advanced scientific accomplishments of the Western world. Through this piece, Shonibare refuses to allow us to ignore the ever-present effects of colonialism and the complexity of the power dynamics between the colonialists and the colonialised.

Across all his artwork, Yinka Shonibare hides his political and social commentary inside aesthetically pleasing pieces. It is only once you reach beneath the surface that each piece is twisted from something beautiful to deeply disturbing. The idea of superficial exteriors cloaking darker realities is present throughout his work. At a time when the concept of ‘fake news’ is so prevalent, Shonibare reminds us of the danger of initial impressions and the importance of looking a little deeper.

The Tate Modern has recently acquired Yinka Shonibare’s piece, The British Library, which highlights the impact of immigration on British culture. It is open to the public for free.