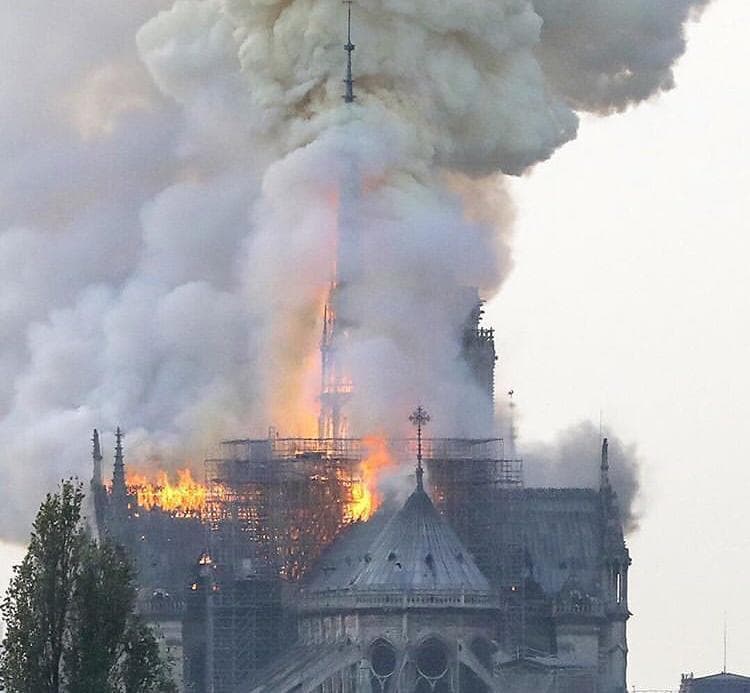 ‘Our Lady of Paris is in flames’: What was truly lost in the Notre Dame fire

“…a great flame, messy and furious, from which the wind by moments took away a shred in a whirl of smoke.”
– Victor Hugo, Notre-Dame de Paris (1831)

Au feu! – Fire! – I can imagine Parisians bustling around the busy Latin Quarter, getting home from work on a crisp Monday evening, when the sight of billowing smoke catches their eye, flames lapping at the Cathédrale Notre-Dame de Paris. As the iconic Lady of Paris was quickly enveloped by a blazing curtain, a grieving crowd watched from the banks of the Seine. More than a monument of acclaimed architecture, 850 years of French history and culture went up in smoke on Monday, and an aura of mourning has descended upon Paris.

Newspapers and the media were quick to report on the tragic news, which provoked reactions of devastation from readers across the world. The fire is said to have started at around 18:50 local time, burning up the cathedral’s spire, which collapsed an hour later. The monument had been under renovation for some months now, and it is believed that this may have had some role in triggering the blaze.

“As the flames consume the cathedral, it is a part of French heritage that is lost.”

One of the most visited sites in the country, a never-ending queue seems to stretch before Notre Dame all throughout the year, which features on many selfies and holiday photographs. Tourists and locals alike are silenced by the Gothic architecture and the feeling of awe which it inspires, from the mischievous gargoyles to the intricate rose windows, and the magical quality of the light coloured by the stained glass. The cathedral is also home to a number of religious relics, including the crown of thorns, and a fragment of the ‘True Cross’, both believed to have formed a significant part of Jesus’ crucifixion in Christian theology. Since 2013, it was also home to a beehive, as part of the environmental effort against the extinction of bees.

The place of the cathedral in French history, culture and national consciousness is second to none. For those familiar with French literature, Victor Hugo provides perhaps the most iconic presentation of Notre Dame, and the scene on Monday is eerily reminiscent of his vivid description of a fire taking over Notre Dame in The Hunchback of Notre Dame (the Disney film inspired by this novel might ring a bell to the non-French reader – pun intended).

The construction of the cathedral, which lasted almost 300 years, started in 1163, and the religious monument has had a tumultuous history. Pillaged during the French Revolution, it also saw royal wedding vows, the coronation of Napoleon I, and mourning masses for a number of French presidents such as de Gaulle, Pompidou, and Mitterand. But beyond its official uses, Notre Dame is imbued with symbolic significance in the French national mind. Originally commissioned to demonstrate the grandeur of France’s political, religious, and cultural power, it has indeed embodied these attributes in the national and global imagination.

“But France is equivocal: Notre Dame will live on in our memory and historical legacy, and broken still it stands.”

If Notre Dame has been subject to fires before, none have been as powerful as this one, which is likely to cause irreversible damage, as much of the wooden roofing and interior have been swept by flames, and much of the artwork will be lost. As the flames consume the cathedral, it is a part of French heritage that is lost, and a feeling of sorrow has enveloped France on Monday, as Our Lady of Paris is consumed before your eyes.

The main structure, and two towers, still stand however, and President Macron has vowed to reconstruct this national emblem. Whether the renovated cathedral will match up to its historical predecessor, only time will tell. But France is unequivocal: Notre Dame will live on in our memory and historical legacy. And broken, still it stands.