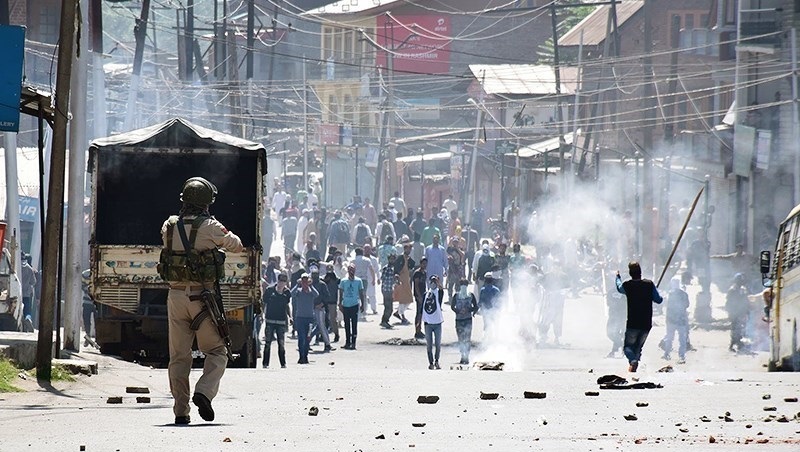 Few borders are as heavily militarised as the Line of Control, which separates Indian-controlled Jammu and Kashmir and Pakistan’s Gilgit-Baltistan. The border sees frequent shelling and exchanges of fire between paramilitaries, killing almost 600 people and maiming hundreds more since 2018.  It is a physical testament to the icy and often hostile relations between the two South Asian neighbours, stemming, apart from religious and ethnic differences, from their dispute over the Himalayan region of Kashmir.

The history of the conflict dates back to the 1947 partition, when Kashmir had the choice of joining either India or Pakistan under a UN-mandated plebiscite. After the region was flooded by migrants from north-west Pakistan, the alarmed king Maharaja Hari Singh called on India for help, starting a year-long war. Since then, the countries have gone to war twice more over it, once in 1965, and again in the Kargil War of 1999.

The most recent escalation in February featured a combination of the major forces which characterise contemporary armed conflict. Firstly, terrorism – India’s airstrikes in Pakistan were in retaliation to a bombing by Islamic fundamentalist group Jaish-e-Mohammad (JeM) on 14 February, which had killed 40 of its troops in Indian Kashmir. Terrorism has become a major issue for Pakistan and its neighbours in recent years, and, despite limited initiatives, the country has not been effective in dealing with the problem. The relative freedom of action enjoyed by Pakistan-based terrorist groups such as Lakshar e Taiba, the Taliban and JeM have led U.S. Defence Secretary Leon Panetta to describe the country as a terrorist safe haven. Similarly, the lack of real willingness to punish such attacks, and evidence of active support for militants including weapons and training has led many to regard state sponsored terrorism as a key part of Pakistani foreign policy. In India, meanwhile, authorities and the media had been calling for revenge, which raises the second element – nationalism.

It is no secret that Hindu nationalism is the leading doctrine propagated by PM Narendra Modi’s Bharatiya Janata Party (BJP). Its view that inside India, Muslims are traitors and enemies, while outside it, Pakistan is to blame for all problems has become widely adopted. The consequent lack of economic opportunities, feelings of discrimination and marginalisation have driven many youths of the predominantly Muslim Kashmir to take up arms. In the lead up to the upcoming election in May, Hindu-Muslim antagonism is a valuable political tool which Mr Modi has proved keen on exploiting in his bid for a second term. Likewise, it is the patriotic and militaristic sentiment championed by the party which calls for a strong response to such a deadly attack, making rapid escalation, even if unwanted, all the more likely.

Terrorism has become a major issue for Pakistan and its neighbours in recent years, and, despite limited initiatives, the country has not been effective in dealing with the problem.

When on February 26 India launched airstrikes into Pakistan, war seemed imminent. India said the target, a terrorist training camp, had been successfully eliminated, with several militants neutralised. Pakistan, on the other side, said the strikes hit an uninhabited hill with no casualties. The next day Pakistan retaliated with aerial bombardment in Indian Kashmir. In the skirmish that ensued, India reported hitting one Pakistani plane, while Pakistan denied this, claiming it shot down two Indian jets and captured both pilots. Pakistan later shared footage of the Indian pilot it had captured, identified as Wing Commander Abhinandan Varthaman, sparking outrage in India, which demanded his immediate release. The contradiction in accounts provided by each side is striking. This lack of concrete information and uncertainty in which military action is shrouded, often called the ‘Fog of War’, is the third element of the showdown and is common in contemporary armed conflict. It can provide a strategic advantage and help maintain a good public image, but breeds instability which can inflame conflict and facilitate escalation.

In the midst of this intense rivalry and struggle between the two nations, it is easy to forget that Kashmir’s citizens are ultimately those who suffer most. As the latest incident unfolded, inhabitants scrambled to shops, stockpiling food and supplies in fear of the shortages war would bring. Homes are destroyed in the regular gunfights and cross border mortar fire. Last year, 86 civilians who were caught in the crossfire lost their lives. Kashmir’s citizens are the victims of aggressive foreign policy and political muscle-flexing. But things need not be this way.

The two sides must normalise the situation to alleviate the hardship from the region’s inhabitants – some 18 million people – and allow them to start working towards the permanent and sustainable improvement of their living standards. Such a development is sure to bring financial benefits to the respective countries, not only through the economic growth of Kashmir itself, but also through the economic confidence that stability brings to the wider region, promoting spending and investment. Local industry will be able to mine its large sapphire deposits more efficiently, and tourism, once an important contributor to the regional economy, will recover in the quieting unrest. It remains to be asked, therefore, how this is to be achieved.

The most democratic solution is another plebiscite, but logistically this is difficult, and is even more unlikely to be accepted by the two sides, who refuse to risk conceding what territory they already hold. Jammu and Kashmir is India’s only Muslim majority, with over 60% subscribing to the faith. In light of current treatment by authorities, many of the disaffected inhabitants of Jammu and Kashmir will doubtless be tempted to join Pakistan.

In their desperate state, some Kashmiris have voiced support for a war to bring the conflict to a decisive end. If one side triumphs, it could bring unity and stability to the region. But given the quality and size of the belligerents’ armies, the potential for heavy casualties is enormous. Both sides possess nuclear weapons, and Pakistan has repeatedly emphasised that it would not hesitate to use them in case of war. It only narrowly avoided doing so with US President Bill Clinton’s help in 1999. One would like to think that weapons of mass destruction would only be used as a last resort, but when a war starts, there is no telling how it might end. War is not inevitable, and certainly not desirable.

In the midst of this intense rivalry and struggle between the two nations, it is easy to forget that Kashmir’s citizens are ultimately those who suffer most.

The most realistic and least risky course of action is reaching a stable situation where both sides settle and consolidate within their respective sectors of Kashmir. A formal agreement which would define officially recognised borders would be ideal, but seeing the reluctance of both sides to withdraw their claims for the region and its value as a political tool to rally nationalism and armament, a permanent ceasefire is more likely. But even this would be infinitely better than the current situation. Kashmir’s citizens would no longer live in fear and anxiety of the next episode of violence. With their newfound ability to embark on the task of rebuilding and improving their lives, they would scarcely be affected by the legal particularities of international law set by Delhi and Islamabad.

To reach an agreement, remedies for the three aforementioned issues must be employed. Pakistan must make a greater commitment to counter-terrorism, and pursue its foreign policy through other means. This could even pave the way for Indian-Pakistani co-operation to rid the region of the armed insurgency that has been plaguing it for years. For India, a distancing from nationalism and identity politics, and reconciliation with its Muslim minority may well help to supress the narrative of victimisation advanced by Kashmiri militants, as well as promote pluralism and inclusivity. Increased autonomy in Kashmiri state administration may also discredit perceptions of an unjust occupation imposed by Delhi. Lastly, in the event of future friction, greater transparency will help ease unnecessary tensions and assist de-escalation and mediation efforts by third parties.

As seen by the return of the captured Indian pilot, and  Pakistan’s Prime Minister Imran Khan’s call for dialogue during a BBC interview, the degree of restraint and gestures towards peace made by both Pakistan and India are encouraging. Nevertheless, the time has come for them to recognise the advantages of stability over open conflict and renounce fighting once and for all. In many modern political conflicts over territory, there seems to form a perpetual and self-reinforcing cycle between terrorism and nationalism. The deprivation of security initiated by violent extremism fuels a shift to greater autocracy, which in turn serves to further marginalise the oppressed towards the abyss of militancy. This pattern forms gradually and produces great anguish for many on both sides. True leadership, therefore, will be measured by the ability to, for the sake of one’s people, break free from this vicious cycle. In the case of Kashmir, for both India and Pakistan, this is as relevant as ever.