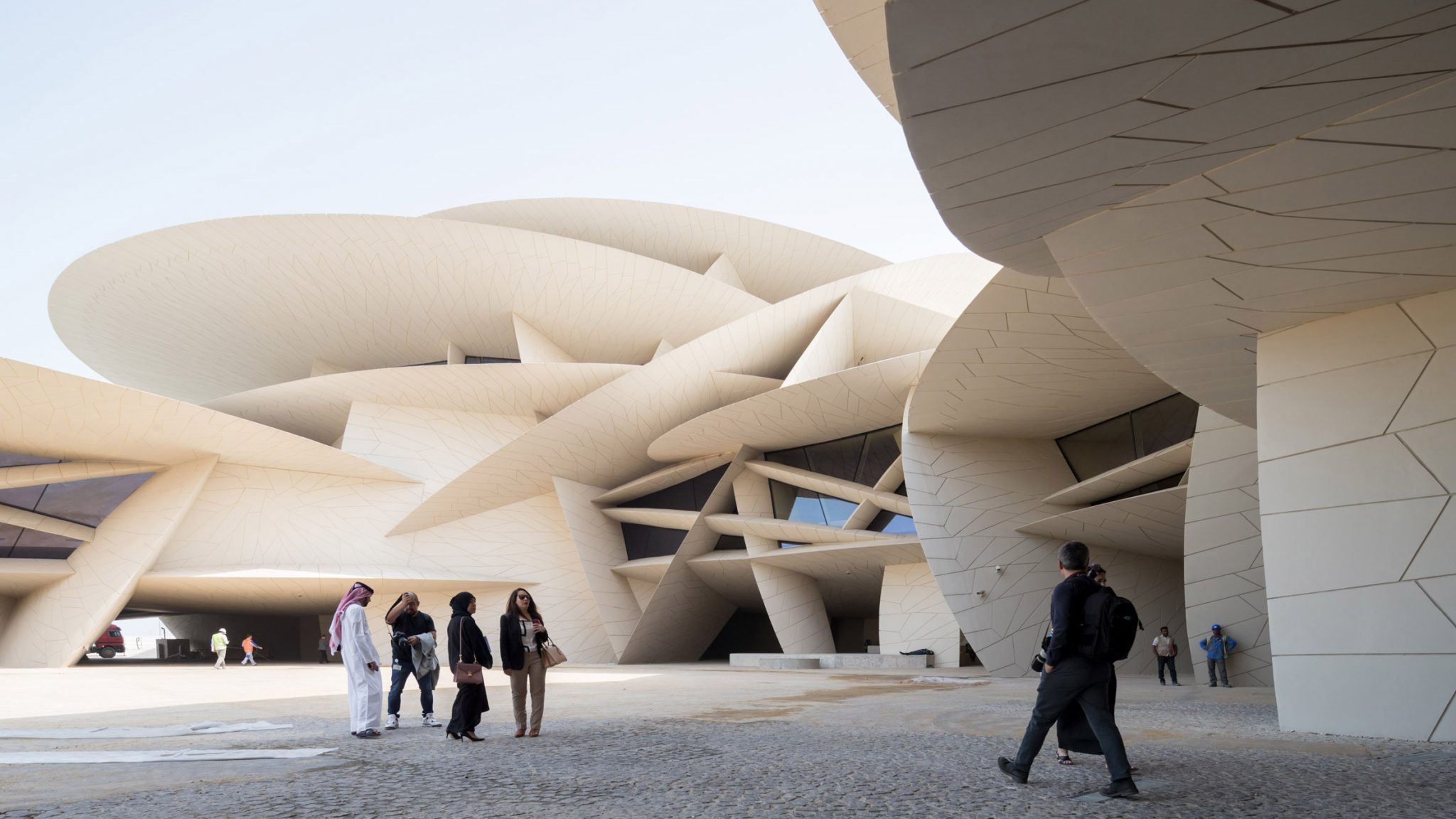 Overlooking Doha’s sea front, The National Museum of Qatar appears as a mirage in the desert. The highly anticipated museum, designed by Atelier Jean Nouvel, held its glamorous opening ceremony on March 27th 2019. The building is an avant-garde structure made with 539 intersecting vertical and horizontal disks of multiple diameters, curvatures, and inclinations. Nouvel’s unique concept for the building stemmed from a natural formation found in the gulf region called the ‘desert rose’. This natural formation occurs when minerals crystallise in crumbling soil underneath the surface of a shallow salt basin. By transforming nature’s engineering into an astonishing man-made one, the cluster of sand-coloured disks harmonizes with the environment as though it had organically grown out of the desert.

Nouvel told the Guardian, “It is a form created by the desert and time, a structure of endless intersections”; a statement which might as well describe Qatar itself, from its prodigious rise as a global power in just a few decades and its pioneering place at the forefront of intersecting innovation. Nouvel described the project of creating the desert rose museum as an, “advanced idea, even a utopian one”. The utopian task took 18 years to materialise, 76,000 panels of 3,600 differing shapes and sizes, and not to mention a budget of more than $400m. An imperious structure at 5, 2000sqm, the technical and imaginative gymnastics of the building is an artwork in itself – a sculpture combining the natural environment and human culture in a way that is virtually unparalleled.

The spatially dramatic exterior continues to surprise when you step into the museum. Award-winning Koichi Takada architects designed the interior of the museum with the concept of ‘desert-scapes’, coherent with Nouvel’s theme of the ‘desert rose’. Qatar’s staggering natural landscape such as the ‘cave of light’ (dahl al misfir) is ingeniously replicated with cutting-edge technology such as 3D modelling and countless CNC-cut timber to create curved walls that produce the natural shape of a cave. The savvy technology is matched with expert craftsmanship, as elements were hand assembled by master Italian carpenter Claudio Devoto and his team. The immersive cave experience is further emphasised through the museum’s undulating ceiling, which is designed to produce a low volume, offering visitors the experience of entering a cave. Attention has been taken even to the floor, which is made out of ramped planes that guide visitors through its galleries in a gradual slope to mimic natural terrain. The result is an elegant expression of Qatar’s geology and cultural heritage; a poignant message for a nation whose wealth has sprung from its natural richness.

Showcasing 1.5 kilometres of galleries, the museum is a celebration of Qatari identity.

Its eleven permanent galleries enable the visitor to meander through the development of Qatar from the formations of the peninsula millions of years in the past to the achievements of the nation’s present. The museum’s inaugural exhibition ‘Making Doha’ charts the city’s unprecedented growth since the 1970s. The loop of galleries, dioramas, projections, and artefacts illustrate the story of how a small nation of pearl divers and nomadic Bedouins metamorphosed into the wealthiest country per capita in only 50 years through the pivotal discovery of natural gas.

Bolstered by royal patronage, the museum embraces both tradition and modernity. The museum complex encloses the early royal palace belonging to the late son of modern Qatar’s founder. This heritage building formerly functioned as the seat of government and home of Qatar’s royal family. Now, the historic palace stands as the centrepiece exhibit in the succession of museum galleries. At the opening ceremony, Sheikh Tamim bin Hamad al-Thani expressed the role of museum in his speech: “Why do we build museums? We build them not to store art collections, nor to display the past, but rather to enlighten the public in Qatar, residents or visitors, about our past, and our present and our place in this world. The museum displays our portrayal of our past, our environment and our experiences from a present-day perspective”.

The opulence of modern Qatar is reflected in every facet of the museum, including the 900m sized lagoon and 114 fountain sculptures resembling Arabic writing that surround the infrastructure. This pageantry makes sense when viewed as part of a wider narrative of the culture arms race between the Gulf states. Only two years previously, Nouvel had presented the equally futuristic Louvre, Abu Dhabi. His latest creation in Doha is a prize for the Emirates’ archrival in the competitive culture volley. NMoQ certainly seems to be a statement of self-confidence; presenting the nation’s place in the global culture stage. It is a statement that is expressed in the building itself; distinctive and out-of-the-ordinary.

The wealth and ambition of Qatar’s story is a pioneering one but there is still a subject that remains moot. As Oliver Wainwright of the Guardian observes, “The museum’s final gallery, set to focus on modern-day Qatar, is yet to be filled. The human costs of the country’s insatiable ambitions would be a worthy subject.” Thus, hinting at a colossal challenge that faces national museums in affluent countries around the world – the knowledge that behind every wealthy nation is an unsettling human price that was paid. Perhaps this is unavoidable for every human utopia.