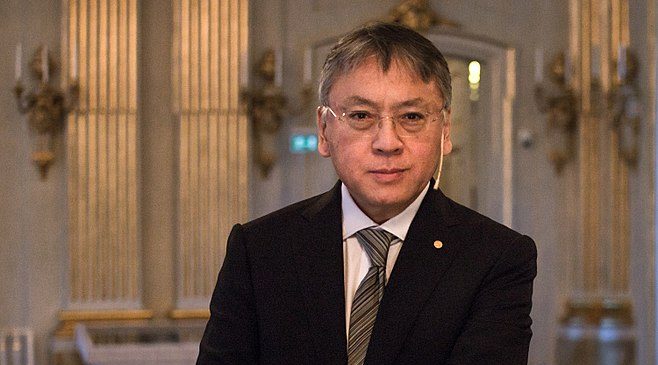 Upon a brilliant expanse of midnight blue lies a single, gold-leafed tree standing atop a great white hill. The words The Buried Giant are printed boldly underneath. Simple, but elegant. Uncomplicated, by mystical. Seemingly ordinary, but entirely unprecedented. My first expression of Kazuo Ishiguro and his masterpiece was powerful, and ever since I have remained an ardent fan of this extraordinary author.

Ishiguro, considered one of the most talented fiction-authors of our time, is from Nagasaki, Japan by birth but moved to the United Kingdom at the age of 5. After receiving his bachelor’s degree in English from the University of Kent in 1980, he published his brilliant first novel, A Pale View of the Hill just two days later in 1982. Since then, Ishiguro has consistently produced excellent pieces, with his latest being The Buried Giant, published in 2015.

To define Ishiguro’s writing in one word, he is like a willow. Not only is he able to write excellently in a variety of genres, he does this with an extraordinary subdued elegance that makes his style so difficult to describe or imitate. The Buried Giant – my favourite of his – perhaps best illustrates this. For one, it is completely different from his other works like Never Let Me Go or The Remains of the Day, and demonstrates just how effectively Ishiguro can move between genres with complete ease. Set in Sub-Roman Britain, The Buried Giant recounts the journey of amnesiac Briton couple, Axl and Beatrice, as they try to find their lost son. While the premise seems completely ordinary, and even dull, Ishiguro’s expert word-smithery infuses the novel with a meaningful message (which I will not spoil); it almost feels as though Ishiguro has transcended storytelling and is using his plot-line as a medium by which to convey double meanings. His works are ones that must be read multiple times in order to fully understand. Indeed, The Buried Giant is even reminiscent of Antoine de Saint-Exupéry’ The Little Prince or Earnest Hemingway’s The Old Man and The Sea in that it masterfully delivers multiple layers of commentary on society and human relations through a simple, non-convoluted story-line.

Unsurprisingly, the rest of the world has also recognised Ishiguro’s exceptional talent. He truly has an impressive resume of awards — with the Booker Prize (1982), the Nobel Prize of Literature (2015), the Knighthood for Services to Literature (2018), and Chevalier de l’Ordre des Arts et des Lettres under his belt, the list of his prizes goes on. Furthermore, Ishiguro’s works have now been translated into over 50 languages and he has become a household name.

“[Kazuo Ishiguro]…has uncovered the abyss beneath our illusory sense of connection with the world.” — The Swedish Academy.

Last April 3, 2019, Ishiguro was able to add one more accolade under his belt: the Bodley Medal. This highly prestigious distinction is the highest award conferred by Oxford’s own Bodleian Library, with previous awardees including Stephen Hawking, Sir Tim Berners-Lee, and Mary Beard. The awards ceremony was held as part of the FT Weekend Oxford Literary Festival, now in its 23rd year. This annual festival holds a series of interviews or activities, and regularly invites famous author speakers such as Ian McEwan and Judith Kerr. Ishiguro was interviewed by the Bodleian librarian, Richard Ovenden, after which Ovenden presented him with the Bodley Medal.