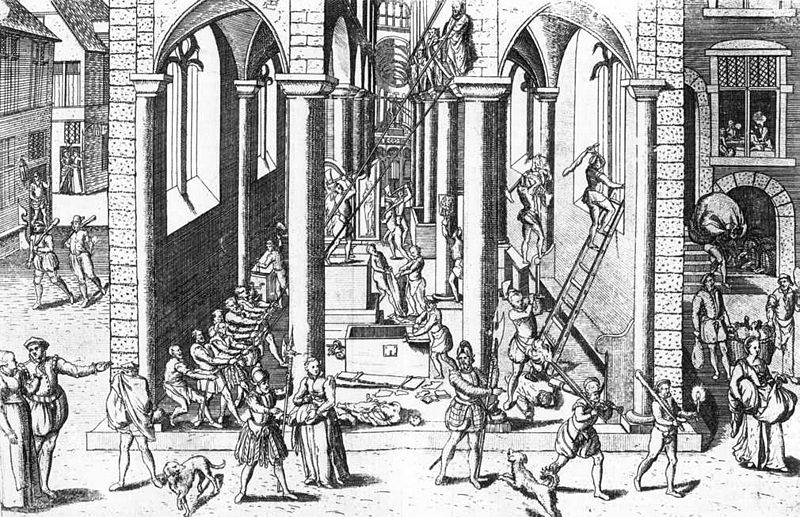 Iconoclasm represents the viscerality of the human response to art. Reflective of more than just our subjective taste, this sort of destruction is charged with a raw sense of rage. Iconoclasm has the potential to throw crowds into a frenzy; tearing down statues and burning paintings. Simultaneously, iconoclasm also has a more reflective side, encouraging us to pause and reconsider our desire for an object to remain visible.

Perception is key to art, for without it objects remain simply objects. It is the way this perception changes over time which underpins artistic destruction. Iconoclasm shows us how images can become political weapons as physical acts of violation represent a perpetuation of ideological arguments. Art as a category becomes more fluid once it is politicised whilst questions over the nature of art itself arise. Do these objects become more like objective artefacts rather than objects of beauty? Or, is it their categorisation as an ‘artwork’ which gives them such an innate cultural currency?

The fluid nature of iconoclastic behaviour runs through its history. In the Byzantine Empire, it was perceived simply as a blasphemous act of religious vandalism as the role of the ‘idol’ was far more prevalent, whilst during the Renaissance, the ethical, aesthetic, social and political reasoning behind the process were considered in far greater detail. With the rise of the notion of the ‘artist’ as an autonomous creator, came the rise of the notion of a ‘work of art’. This resulted in a direct correlation between artistic destruction and the ruin of ‘high culture’.

During the French Revolution, iconoclasm became associated with blind acts of uneducated vandalism, likened to cultural ignorance and a lack of a strong government. The 1843 ‘The Breaker of Images’ engraving (seen below) demonstrates this notion of senseless and uneducated destruction as it depicts a rather uncivil character about to smash a sculpture in the artistic style of the Ancien Régime; an enemy of beauty and culture.

The history of iconoclasm in relation to communism is also particularly interesting. Here we see how power is visually projected, but also how a changing relationship to power itself is reflected through the ruination of objects. The multiple ways in which people interpreted the function of art made for a period rife with destruction. In Lenin’s April Decree of 1918, he permitted that all art which was not of historical relevance must be taken down. This was a sort of visual cleansing, since Lenin believed in the direct relation between imagery and power.

Equally, the resistance to iconoclasm reflects the counter view of those who wished to protect the objects at stake. In Berlin, for example, people used graffiti to add messages to statues of Marx and Engels in front of the Palast Der Republik declaring, ‘we are innocent’, whilst the statue of Lenin in the Leninplatz was painted with a sash reading ‘no violence’. The general population of Berlin were in staunch objection to the erasure of their history.

Often, an obvious relationship between a work of art and the subject it depicts can prove dangerous. Art depicting leaders or ideas will tend to share the fates of its subject as popular opinion fluctuates. If a work of art symbolizes a monarch, regime, or artistic movement that falls out of fashion, the objects face the potential to be subject to destruction or disregard.

The Iron Lady: The lady’s not for watching