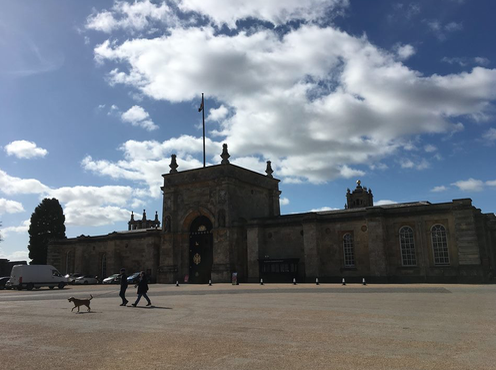 It was the kind of day that we all dream of, but never seems to come. That elusive, sunny Oxford afternoon when students, like the rays of the sun, beam in all-too-momentary freedom from the dark, grey cloud cover of essays and deadlines. Revelling in that glorious British sunshine, I finished my tea, switched off Radio 4, and set off with Jerusalem blasting through my earphones, ready for an afternoon of Churchill, Dunkirk and Britain. What I found was all that and more. Blenheim Palace, the unmistakable symbol of British history, turned out to be a beautiful patchwork of motley details which told funny, personal and insightful stories about the lives of both the inhabitants and the palace itself.

The year is 1704. A French army led by King Louis XIV stands defeated by General John Churchill, the 1st Duke of Marlborough, at the small village of Blindheim in Southern Germany, after a battle which saved the Prince of Vienna from a Franco-Bavarian alliance, and ultimately turned the tide of a war which had until that point been going the way of a French autocrat hell-bent on toppling the Habsburgs and dominating Europe. Queen Anne gifted the Duke 2,000 acres of land in honour of the victory, and the construction of the monumental country house, named “Blenheim” in English after that small village in Germany, began a year later.

Indeed, for those with patriotic sensibilities, the palace might have somewhat of a rousing effect.

Fast forward to the present day, and this narrative is not exactly hidden. Every visitor to the palace is greeted in the Great Hall by an enormous allegorical picture on the ceiling of John Churchill, as Mars, approaching Queen Anne, the Roman goddess Britannia, with the Despatch of Blenheim, which is labelled in Latin, “Anno Memorabilis” (“A Memorable Year”). The palace was built in honour of a Brit standing up against tyranny in Europe, and is most commonly associated with the Brit standing up against tyranny in Europe; both outnumbered, both war heroes, both called Churchill.

Indeed, for those with patriotic sensibilities, the palace might have somewhat of a rousing effect. As I moved from the Great Hall to the Churchill Exhibition, Britain was well and truly in the air. The glory of Mars and Britannia gave way to the countless medals Sir Winston had won in the Boer Wars, the rifles he had fired, the uniforms he had worn, and stern, prime-ministerial portraits of a man in no mood for compromise. A wall of text and images told the story of how he had sent not only the country, but the English language itself to war, and galvanised the nation against the existential threat of fascism. Never in the field of museum visiting had so much been shown to so many about so few; we could see him in the paintings, we could see him on the walls, we could see him on the plaques, and in the brochures. Jerusalem was playing again as I stood in awe of leadership in human form, the man who gave everything for his country, a truly austere, self-denying Brit who made little time for himself and personal amusement in the face of his burdens as prime minister. Then I saw this: 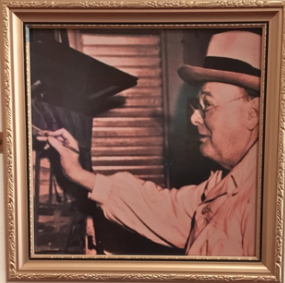 So, it turns out Churchill was into painting. Like, over 500 paintings and had his own personal painting studio built specially, into painting. And that was hardly the only unexpected thing I learnt at the Churchill Exhibition. By the time I left it, I knew about the songs he’d sung in his teen years, the stories of him playing in the gardens at Blenheim as a little boy, and how he had proposed to his wife, Clementine Hozier, at the “Temple of Diana,” a summerhouse by the lake in the grounds of the palace.

For any readers waiting for an explanation as to why I’ve fixated on Churchill so much in an article which is supposed to be about a place, fear not. Here it comes. When most people think of Winston Churchill, they probably don’t picture an artist peacefully painting landscapes of nature, a man summoning the courage to propose to the woman he loves, or a carefree little boy playing in the countryside. The Churchill Exhibition was so striking and revealing because it showed Churchill the human, not just Churchill the prime minister. It was a side to him which I, like most people, wasn’t used to seeing. The palace made me think about him in a different, more personal way, and that, more than anything, was what made the place so impressive.

Behind every detail of the palace is an individual tale of how it came to be that way.

The Great Hall is decorated with a dramatic plethora of colours, an allegorical picture of Roman Gods, and raised statues gazing down like spectators at a grand archway similar to the proscenium arch of a stage. The architect of the palace, Sir John Vanbrugh, began his working life as an aspiring playwright. Coincidence? I think not.

George Spencer, the 4th Duke of Marlborough, was fascinated by pottery. At the far end of the Great Hall, that monument to the European classical tradition and the 18th-century English court, there just so happens to be a collection of porcelain which originally belonged to the Kangxi dynasty of China.

Amid the smiling faces which hang on the walls of the Green Drawing Room, Sarah Churchill, the 1st Duchess of Marlborough, shoots a moody, devious glance from behind her playing cards at her friend, plotting her next move. The Duchess, a woman so frugal that she avoided crossing her t’s and dotting her i’s to save ink and money, saw the family’s beloved home as an ostentatious and extravagant gesture, and hated it bitterly. Her arguments with John the Playwright-turned-Architect got so bad that she banned him from entering Blenheim completely; he never saw the palace finished.

Portraits used to be priced by the number of people in them, with different rates for just the head and shoulders and for the full body (hence “to cost an arm and a leg,” FYI), and yet the portrait of Colonel Armstrong with John the 1st Duke of Marlborough was sold to the family for the price of a single person. Two days after the artist had stated his original price, he received a strongly-worded letter saying that this was not acceptable because the family had not asked for Armstrong to be in the picture. Who could possibly have written that?

Behind every detail of the palace is an individual tale of how it came to be that way. It is fundamentally a messy patchwork of personal stories which cannot be pigeon-holed into one neat narrative about British history, however patriotic and lyrical that narrative might be. The details humanise the inhabitants through the experiences which they represent, and, as such, humanise the palace itself. Initially a reading room for John Churchill, the Long Library still has one window which is slightly less weathered than the others, a momento of that time when it was turned into a school for the evacuated boys of Malvern College in WWII, and one of them managed to put a cricket ball through it. The Red Drawing Room has special “chaperone sofas” designed in the 1700s to make sure women were not vulgar with their partners when being courted. Metres away, in the library, 1940s-style telephones tell of when women working for MI5 were stationed there in the war, and Winston used to call them twice a day asking if they’d managed to reconstruct MI5’s index of enemy spies, which had been lost in the Blitz.

Blenheim Palace has lived a long and fascinating life, one which has seen the stories of its occupants, the history of Britain and the changing world blend with the palace itself, and give the palace its own unique story. It is a truly illuminating, human place, and makes for a thoroughly satisfying daytrip. 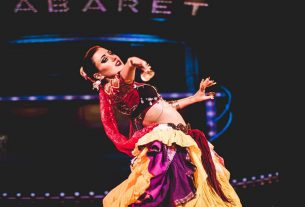 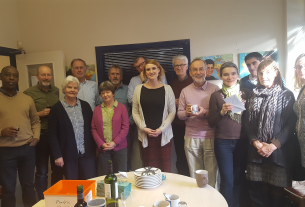 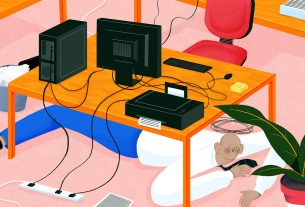 A Perspective on Intrusive Thoughts and Social Isolation