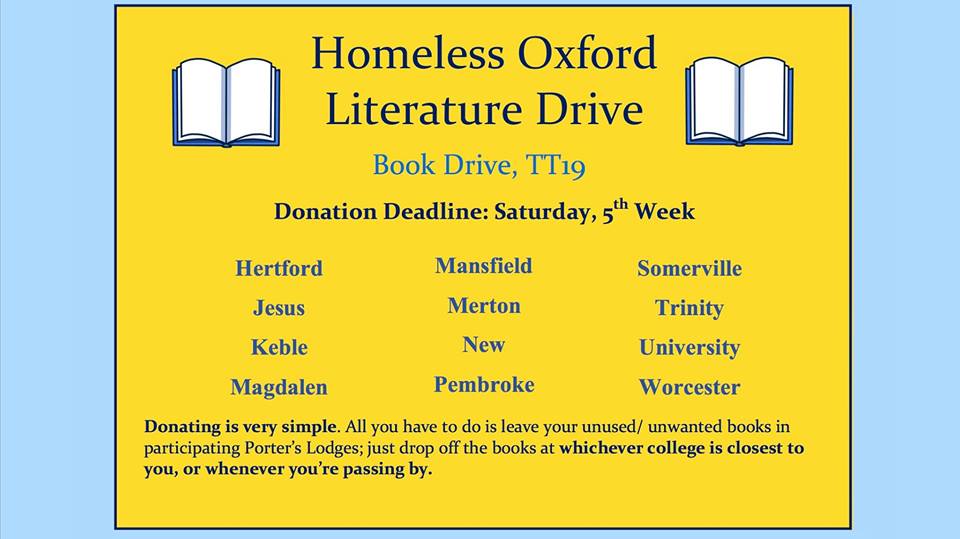 A new charity has been established by Oxford students with the aim of distributing books to the city’s homeless.

The non-proft organisation Homeless Oxford Literature Drive (HOLD) was set up last month by Hamza Rana and Alex Haveron-Jones, from Somerville College. This term, HOLD have launched their first book drive where they are collecting donated books from students in a number of JCRs and Porters’ Lodges.

According to their website the group is “motivated by [its] desire to support the increasing number of homeless people in Oxford [and] work to distribute books amongst the homeless community in the hopes that [it] can offer enjoyment and respite for vulnerable members of our society”.

The founders told The Oxford Student: “We founded HOLD to alleviate the stresses experienced by the homeless community living rough in Oxford.

“We have been working alongside a number of Oxford colleges to spread visibility and seek support in our endeavour.”

HOLD went on to say: ‘The students of Oxford often tend to forget that, while the city is a surreal and prosperous place for them, the harsh reality of life on the streets is something the rough sleepers of the city have to face every day.”

According to Oxford City Council, in November 2018 there was an estimated 94 rough sleepers within Oxford streets. They attribute the rise of rough sleepers to cuts to social care and mental health services, increasing rent prices and welfare reforms.

The charity is primarily seeking fiction books but also accept non-fiction books that can provide benefit or use to the reader.

Donations for the Trinity term drive will be accepted until 1st June (Saturday 5th week). For more information find HOLD on Facebook.