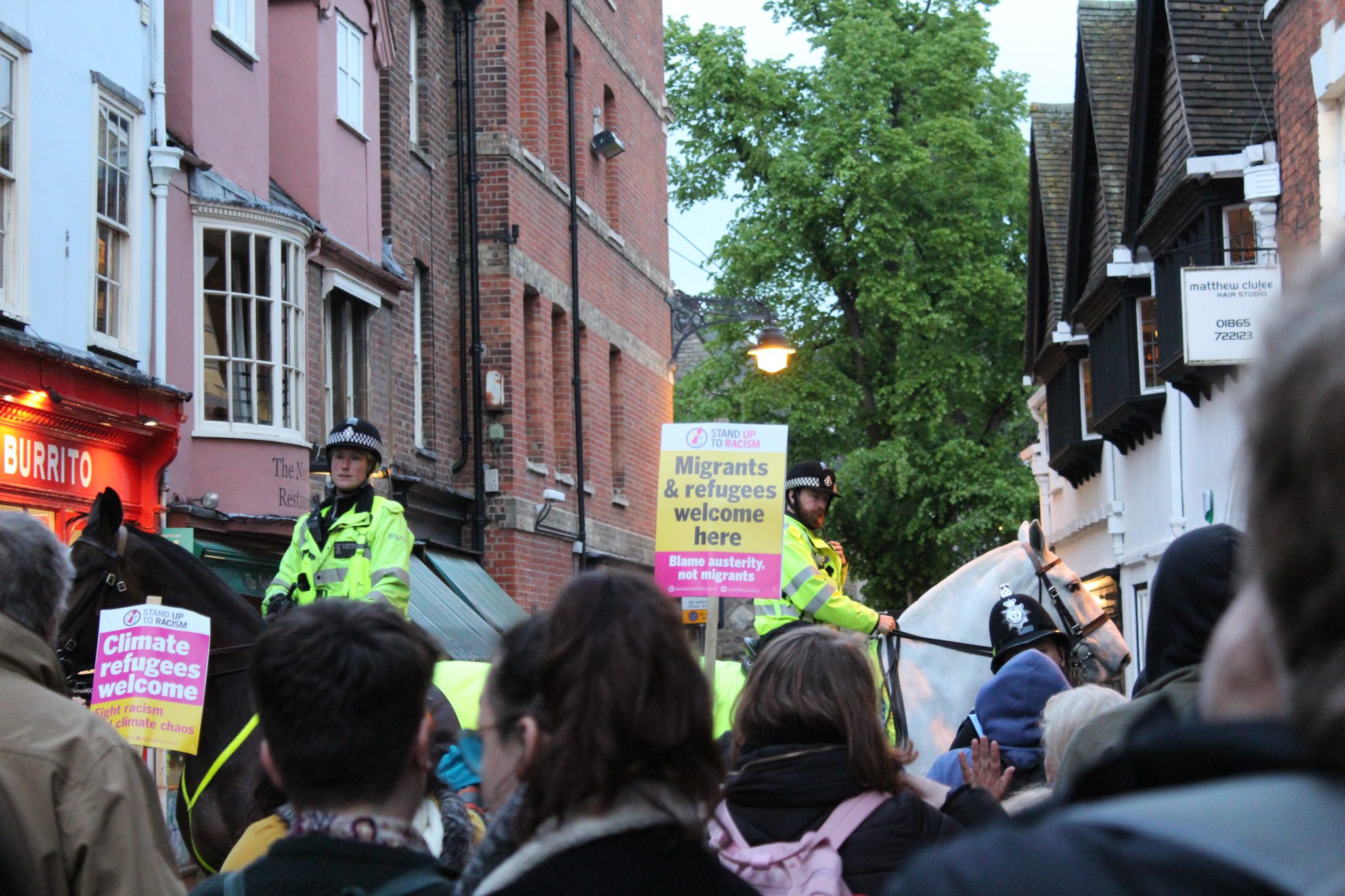 Protestors yesterday gathered outside the Oxford Union to demonstrate against the invitation of far-right media personality Katie Hopkins. A heavy police presence surrounded  the area, including several mounted officers. At least one arrest was made after an altercation between a protestor and a counter-protestor who was seen performing a Nazi salute.

The protest, which consisted of several dozen demonstrators, was primarily organised by a new Oxford campaign created to boycott the Union over its invitation of several far-right speakers such as Nick Griffin, former leader of the British National Party, and Steve Bannon, a pivotal figure in the American ‘alt-right’ and former advisor to President Donald Trump.

Thursday’s protest was timed to coincide with Hopkins’s participation in a Union debate on the motion ‘This House Support No Platforming’, in which she spoke for the opposition.

‘Boycott the Oxford Union’ was also joined by Oxford’s ANTIFA branch, some of whom were masked. The Boycott campaign claimed support for their protest from seventeen student organisations, including the OUSU LGBTQ+ Campaign, OUSU Disability Campaign, Race and Resistance, Oxford Migrant Solidarity, and the Oxford Labour Club. Nine city councillors and the Labour MP for Oxford East, Anneliese Dodds, also expressed solidarity.

Dodds noted on her Twitter that she was “saddened to hear that yet again, the Oxford Union Society has gone out of its way to court controversy by inviting speakers expressing extreme right-wing views”, providing a link in her statement to a petition created by the Boycott campaign which outlined its demands to the Union.

Hopkins spoke on opposition with Toby Young, former director of the New Schools Network, who resigned following the discovery of allegedly misogynistic and homophobic tweets; and Ann Widdecombe, former Conservative MP and a one-time proponent of blasphemy laws.

The proposition included Australian Former Chief Justice Robert French and Mariah Idissi, an activist and model who was the first Muslim hijab-wearing model and appeared in H&M’s ‘Close The Loop’ campaign. Naz Shah, the Labour MP and Shadow Minister for Women and Equalities, pulled out of speaking in proposition shortly before the debate was due to take place.

Hopkins has a history of engendering controversy. Statements of hers have described migrants as “cockroaches” and “feral humans”. Following the 2017 Manchester Arena Bombing, Hopkins called for a “final solution” to terrorism, leading to accusations of evoking the Holocaust.

In response to the protest, one Union official told The Oxford Student: “When you compare it to [the Bannon protest], there is no blocking of people getting in, no violence from what I can see…they’re just exercising their right to protest and more power to them”.

A second official said: “I just wish this was inside the chamber. Great, protest, but this society is about challenging views, so I’d prefer if they came in and asked questions”.

The chamber was full for the debate. The Secretary, Spencer Cohen, opened with a jibe at the Boycott The Oxford Union campaign, saying: “With cocktails at £2.50, you won’t find any of our members boycotting the bar”.

Exeter student Celeste McGinley, speaking first first for the Proposition, criticised the protestors for not taking part in the debate, saying: “This is the Oxford Union, we debate here.”

St Peter’s student Jack Soloman, speaking third for for the Proposition also described Naz Shah as a “an antisemetic Labour MP”, to the appluase of his audience. During the course of the debate, Hopkins also said that she was pleased that Naz Shah had chosen to withdraw, stating: “One fewer antisemite in the room is always a good thing”.

Hopkins spoke second for the Opposition, and was met with cheers by the audience when she rose to speak.

She also addressed a particularly controversial tweet which referenced the Final Solution: “The morning after the Manchester bombing attacks I tweeted that we needed a final solution to terror; I stand by that tweet. I have no problem with it”.

A speaker in the audience responded, on a point of information: “You have insulted a lot of people in this room but you haven’t actually answered the question of why we shouldn’t support no platforming” to the applause of the audience.

The Union debate was preceded by the creation of new campaign to boycott the Oxford Union following its decision to invite figures described by the campaign as “fascist and racist”. Asks students to pledge not to attend Union events and has created an online petition demanding an end to the Union’s invitation of such individuals.

In respose, Hopkins tweeted: “Delighted to be back at @UniofOxford speaking @OxfordUnion this week. To protest my appearance and swear blind you will boycott the Oxford Union for eternity please do sign this petition. Children. Stand by.” The tweet was accompanied by a link to the petition.

In response, the campaign said: “Thanks for the free publicity, you utter cockroach”.

During the Union debate, Hopkins also derided the campaign, calling them full of “vegans and unemployables”.

The protest follows similar events in previous terms. In Hilary, a demonstration was held against speakers Marion Marechal Le Pen. The largest of the recent protests occurred in Michaelmas when Steve Bannon was invited to speak.

This is Hopkins second time speaking at the Union.